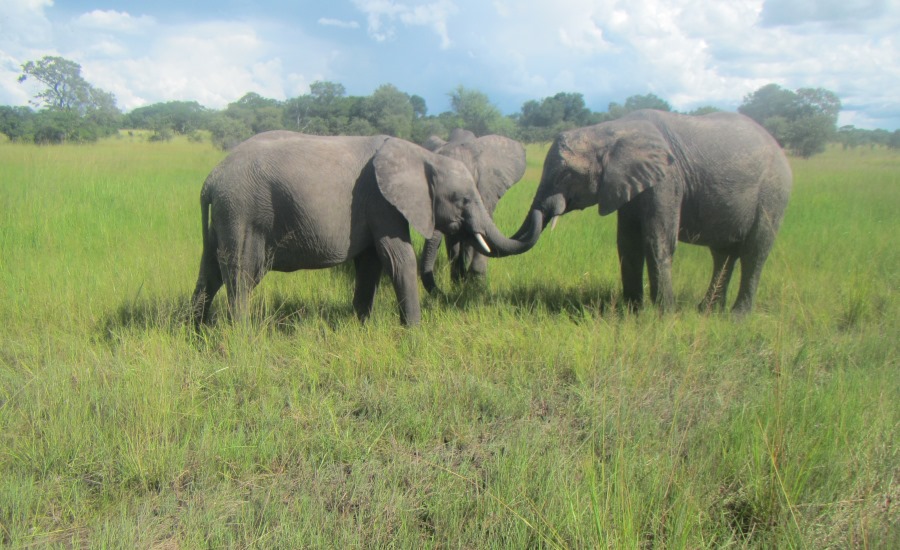 Chodoba and Chamilandu, the oldest orphaned elephants currently being rehabilitated at the DSWF – supported Elephant Orphanage Project (EOP) in Zambia have returned safely to the Release Facility orphan herd after a 22 day excursion.

They were not alone on their adventure, the Project team tracked their movements via Chodoba’s satellite tracking collar to ensure they remained in safe areas and to enable staff to periodically check on their welfare from a distance.

Having left the release facility on 3rd February the Project team caught up with them on 24th February – the two intrepid elephants browsed close to the EOP herd, but interestingly chose not to meet up with them. The orphans’ carers on night duty could hear them but could not see them.

The next day, Chamilandu and Chodoba finally returned to the orphan herd. They caused chaos as Chamilandu’s eagerness to reconnect with Rufunsa caused her to rush up to young Mphamvu, sending him running off into the bush. Meanwhile Rufunsa and some of the other orphans rushed in behind Chamilandu, with others following Chodoba and others going in the opposite direction! The carers split up into teams and managed to regroup all the highly excited and confused orphans. There were a lot of emotional greetings, rumbling, trumpeting and smelling each other all over.

Chamilandu and Chodoba then spent the evening moving around outside the camp but with no reported sightings of them on 26th February, this may have been a flying visit. Chodoba especially seems to have fully embraced his time in the wild.

However quick this visit turns out to be, the Project staff were very pleased to see them looking fit and healthy, both in excellent body condition.

The Elephant Orphanage Project is a project of Game Rangers International, established by the David Shepherd Wildlife Foundation, in close collaboration with the Zambia Wildlife Authority and International Fund for Animal Welfare.