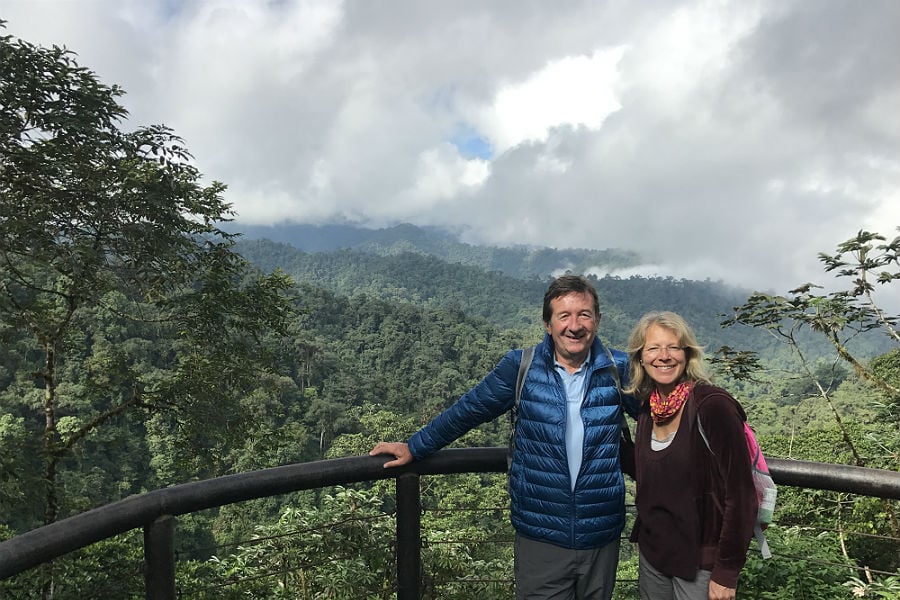 Join David and Helene in an adventure around the world

'Turning left around the World'

David and his wife Helene’s 10 month adventure around the world included 15 countries with visits to the Atacama Desert, the Galapagos Islands, Easter Island, Machu Picchu, Myanmar, and Japan.

The new book of the adventure is published by Mirador and available on Amazon. This is an extract from the book where David and Helene encounter some of the more frightening residents of the Amazon rainforest in Ecuador.

The entrance to the Mashpi Reserve resembles the gateway into Jurassic Park. Two towering heavy wooden gates were slowly opened by the Rangers, a salute and a wave and we were in.

‘We need to get you togged up,’ our guide Jean told us, ‘and you’ll need these,’ handing us some industrial heavyweight binoculars that would have been more at home with the Gurkhas.

‘First you’ll need boots,’ he advised, as we followed him into the “togging up” area.

‘We’ve got boots,’ Helene whispered to me.

‘Apparently not, look.’ Dozens of upturned black wellies, upturned to keep the spiders out we later discovered, were lined up next to benches of silver water bottles and rows of thick pine walking sticks with rubber grips just like the one Jean was leaning on.

We were measured up for walking sticks and boots, sadly no machete, handed a Mashpi silver water bottle and off we set trying to keep up with Jean.

‘Why are we wearing big black wellies?’ Helene asked.

‘Dunno, probably to protect us from snake bites around the ankles.’

As novices in the rainforest we were unsure what to expect but guide Jean guided us well, stopping every now and then when we heard the squawk or scream of a bird or a rustle of something unidentified in the undergrowth or overhead.

In the rainforest canopy we first heard, then met a family of Howler Monkeys playing above us. The little ones riding on the backs of their parents as they sprang from tree to tree, what a sight, what a sound. You may have heard them, appropriately enough they provided the “voice over” for dinosaurs in the Jurassic Park movies.

Later that evening was to be our first night expedition.

‘Have you seen all the midges attracted by these lights?’ I protested ‘we’ll get eaten alive!’

‘You should have put on the Moskito Guard I gave you, it cost a fortune!’

We were barely five minutes into the expedition when there was great excitement from our guide beckoning us over and pointing into the undergrowth.

‘Quick, before it disappears!’ he said, ‘It’s a Tarantula, if I poke it with this stick it might come running out.’

‘That’s OK, no need to aggravate it.’ I virtually begged.

‘Shall I take a look first?’ offered Helene. No argument from me. ‘Ooh! that’s big and furry.’

With moths whirring around our head torches and a variety of oversized arachnids being unearthed by our guide the soundtrack of the rainforest began to play out. Squawks screams, whistles, yelps, squeaks, shrieks, howls and wails, it had it all, I’m sure I heard something laugh as well. The loudest turned out to be from a small frog blasting out a sort of quack with a belch.

‘Turning Left Around the World’ is available in paperback and kindle format. Amazon reviews include; “A great journey, full of laughter, a few tears and lots of heart. It’s romantic and adventurous, amusing and understanding, a story to enjoy” – Claire Ashton, Book Blogger.co

‘TURNING LEFT AROUND THE WORLD’