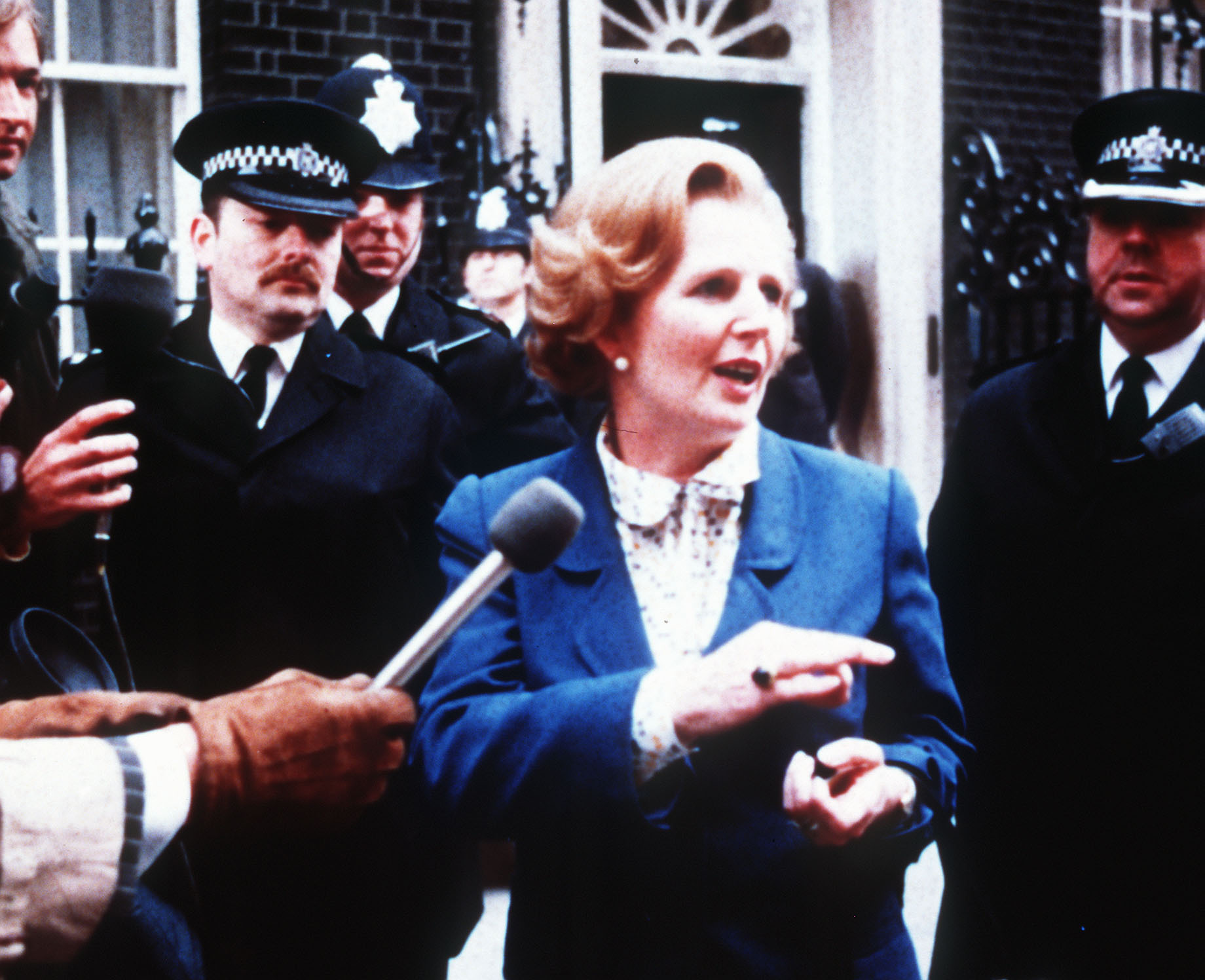 Events during the Thatcher years

Baroness Thatcher died aged 87 following a stroke, it was announced on Monday.

The former prime minister, who had suffered bouts of illness for many years, was said to have died peacefully.

Thatcher changed Britain. She was the driving force from that heady moment when she recited St Francis of Assisi on the steps of Downing Street on May 4, 1979, to the day, after nearly 12 years in power, when the woman who had tamed the unions, won the Falklands war, and rolled back the power of the state, was discarded by her own party.

They were years of tumult and frenzy, sometimes savagery, but rarely serenity.

She never lost an election, nor a vote in the House of Commons.

In the end, in the Tory leadership battle, she secured a better vote, and lost, than did John Major, who succeeded her.

It was indeed a funny old world which pitched out the woman who gave her party and her country perhaps the most spectacular and daring leadership since the Second World War.

These are some of the highlights which marked the Thatcher years of power through the 1980s and beyond:

May 4, the Tories win with an overall majority of 43 and the nation has its first woman prime minister;

November 29, Mrs Thatcher calls for a £1,000 million cut in Britain’s contribution to the European Community, saying she is not afraid to precipitate a crisis;

January 24, Government outlines package of anti-Soviet measures as protest at invasion of Afghanistan;

August 27, unemployment reaches two million for the first time since 1935;

October 15, Jim Callaghan resigns as Labour’s leader to be succeeded by Michael Foot.

January 26, The so-called Gang of Four form Council for Social Democracy leading to the eventual SDP;

October 15, Norman Tebbit delivers his so-called “on your bike” speech;

January 14, Mark Thatcher is rescued after being missing in the Sahara Desert on the Paris-Dakar rally;

May 2, The Argentine cruiser General Belgrano is sunk with hundreds of deaths;

May 4, HMS Sheffield hit and sunk by Exocet missiles with loss of 21 lives;

May 12, The QE2, equipped as a troopship, sets sail for the Falklands;

June 24, The Prince and Princess of Wales have an heir – William Arthur Philip Louis;

October 8, Margaret Thatcher declares: “The NHS is safe with us”;

February 4, Shops Bill on Sunday trading is defeated in the Commons;

July 13, Neil Kinnock narrowly escapes injury when his car overturns on the M4;

October 5, Cecil Parkinson admits he had relationship with his secretary, Sara Keays, and that he is father of her forthcoming child and on October 15 he quits as trade and industry secretary;

November 1, Michael Heseltine says that demonstrators at Greenham Common and elsewhere who get near nuclear missiles are liable to be shot;

September 16, Prince Harry born to Prince and Princess of Wales;

January 23, House of Lords televised for the first time;

May 11, Total of 56 fans killed in fire at Bradford City’s football ground;

May 22, Liverpool fans rampage at Heysel Stadium in Belgium resulting in deaths of 38 Belgian and Italian fans;

January 24, Leon Brittan resigns as trade and industry secretary over leaking to the Press Association of letter berating Michael Heseltine’s actions over Westland;

April 28, News reaches the west about the Chernobyl disaster;

October 26, Jeffrey Archer resigns as Tory deputy chairman after newspaper alleges he paid a prostitute to leave the country;

March 6, Herald of Free enterprise rolls over outside Zeebrugge with 200 dead;

July 24, Jeffrey Archer wins £500,000 damages for libel against Daily Star who alleged he slept with prostitute; he was later imprisoned for perjury;

August 8, David Owen resigns as leader of SDP after his members vote to merge with the Liberals;

August 19, Total of 15 dead and 16 wounded in Hungerford massacre;

January 10, Lord Whitelaw resigns as Leader of the House of Lords through ill health;

March 3, Mrs Thatcher announces “we have become a grandmother”;

July 24, In Cabinet reshuffle foreign secretary Sir Geoffrey Howe becomes leader of the Commons and is replaced by John Major;

March 31, Serious rioting after mass rally against the poll tax in Trafalgar Square;

July 14, Nicholas Ridley resigns from Cabinet after Spectator interview in which he claimed Germans aiming to take over Europe;

November 1, Sir Geoffrey Howe resigns saying he could no longer serve with honour and then on November 13 makes devastating resignation speech;

November 11, Mrs Thatcher says she will hit leadership challengers “all round the ground”;

November 20, Mrs Thatcher wins first ballot but without the required majority, declares: “I fight on. I fight to win”;

Love her or hate her, the legacy will live on