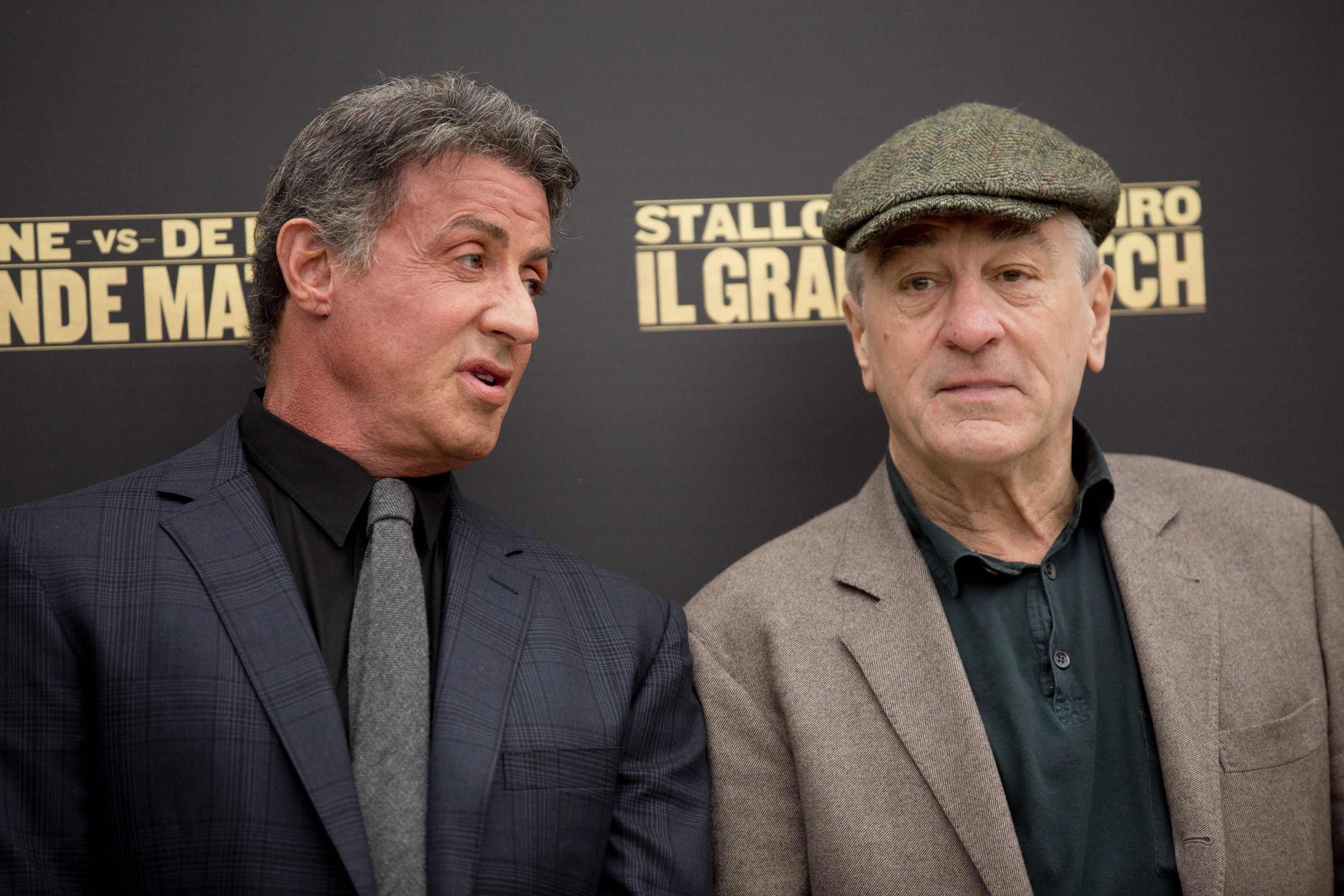 Big screen icons Sylvester Stallone and Robert De Niro are about to go head to head for Grudge Match. Susan Griffin takes a ring-side seat as the Hollywood heavyweights indulge in some (gentle) verbal sparring

The Hollywood heavyweight’s decided he needs a little time out, given his opinions have already landed him in a spot of trouble – like the time he branded his former Expendables co-star Bruce Willis “greedy and lazy”.

“I think George Clooney said it best, when he said you’ve got to be an idiot if you’re a celebrity and use Twitter, and then wake up in the morning and you’re sober and your career’s over,” says Stallone in that distinctive low mumble.

“I mean, you’ve got to be really careful, because you think you’re a genius up there in the middle of the night, and wake up an idiot.”

He’s considering signing up to the photo sharing site Instagram. “But isn’t that for younger people?” asks the 67-year-old, looking at Robert (‘Bobby’) De Niro who’s sitting next to him. If it’s clarification he’s after, he’s asked the wrong person…

“I can text and email,” the Taxi Driver star responds.

But these megastars haven’t been brought together to discuss the pros and cons of social networking. They’re here to talk about their new movie, Grudge Match.

They play Henry ‘Razor’ Sharp (Stallone) and Billy ‘The Kid’ McDonnen (De Niro), two Pittsburgh boxers whose rivalry brought them fame and fortune, until Razor unceremoniously dropped out of their decisive third bout and both fell into obscurity. Now, 30 years on, they’re presented with the opportunity to return to the ring and settle the score once and for all.

While he and De Niro may not be playing their famous characters, the comedy more than winks to those iconic roles.

“I thought it was going to be a skit, I didn’t want to do it,” admits the New York-born star, looking tanned and beefed up in a black suit.

“I was being very precious with what we’d built up over the years [with Rocky], but Bobby kept calling and breaking my chops. He said, ‘C’mon, you’ve got to do this movie, don’t be an idiot’. I said, ‘I dunno, is it going to be like Raging Bull versus Rocky The Flying Squirrel?’ I didn’t know how they were going to sell it, but he convinced me.”

As keen as De Niro was, he knew the only way it would work is if the two of them signed up. “If Sylvester wasn’t part of it then the movie wasn’t going to happen,” says the quiet 70-year-old actor, dressed in jeans, tweed jacket and flat cap.

In the movie, while Razor wishes the renewed interest in the boxing pair would disappear, Billy ‘The Kid’ relishes the new found attention.

“These two guys are in really different places in life,” says De Niro, who also hails from New York. “My character’s done all right for himself financially, but still has an unfulfilled yearning to have this final fight.”

Preparation for ‘Grudgement Day’ started long before the crucial scenes were filmed.

“Both Sly and De Niro totally dedicated themselves,” says Segal. “For Sly, staying in shape is a lifestyle. For Bob, it was a real challenge and physical commitment, but he really dug in and worked his butt off.”

De Niro trained under the watchful eye of Robert Sale, who collaborated with Stallone as a technical advisor on Rocky Balboa.

“He was just terrific. Inspiring…” says De Niro. “But he,” he adds, patting Stallone on the back, “doesn’t like me to say nice things.”

“I don’t want people to hire him, he’ll be too expensive!” Stallone retorts, laughing, before admitting that he too upped his game before shooting began. “I trained hard because I wanted to beat up Jack LaMotta so bad!”

Of course, it’s only natural that the movie pays homage to the famous Rocky training montage, which is why Razor’s seen in some scenes attempting to punch meat and pull a truck.

“I asked, ‘Can you get a smaller truck, like a wheelbarrow?’ jokes Stallone. “But no, Peter said the truck would be dramatic looking.”

It’s a reminder that these guys, however tough their personas, are simply actors. “I have a great respect for fighters, it looks easy and it’s not. It’s not nice to get hit,” says De Niro.

Nodding, Stallone adds: “I always tell people movies are one thing, but you get in a ring with a boxer, even the worst heavyweight in the world, he’s going to murder you. You’re an actor, and you’ve got to respect the pain, suffering and also the glory and the skill that goes into what they do. That’s why I love the sport so much.”

This love stems from “a dramatic and traumatic” experience at school. “There was this big bully coming after me and I just started to move around and pepper him – like bham! Bham! – and I thought, ‘I like this’,” Stallone recalls.

“I’m not overly gifted but I started to study the sport, just to understand the dynamics, and the science and physics of it.”

Unlike many of his films, Stallone didn’t write the script or direct this one, a situation he likens to being a pilot travelling as a passenger on a plane.

“…And then you hit turbulence and want to get in the cockpit. But you realise the pilot’s pretty good, so you can sit back and relax,” he continues.

“Actually, it’s like a vacation to have a great script, a great director, a great co-star. It happens very rarely. It happened on Cop Land [the 1997 crime thriller also starring De Niro] and this. You’re usually with a director you’re not sure of, or with an actor you can barely stand or don’t talk to.”

“Yeah, you know what I’m talking about,” Stallone notes.

So will they reunite for a third bout? 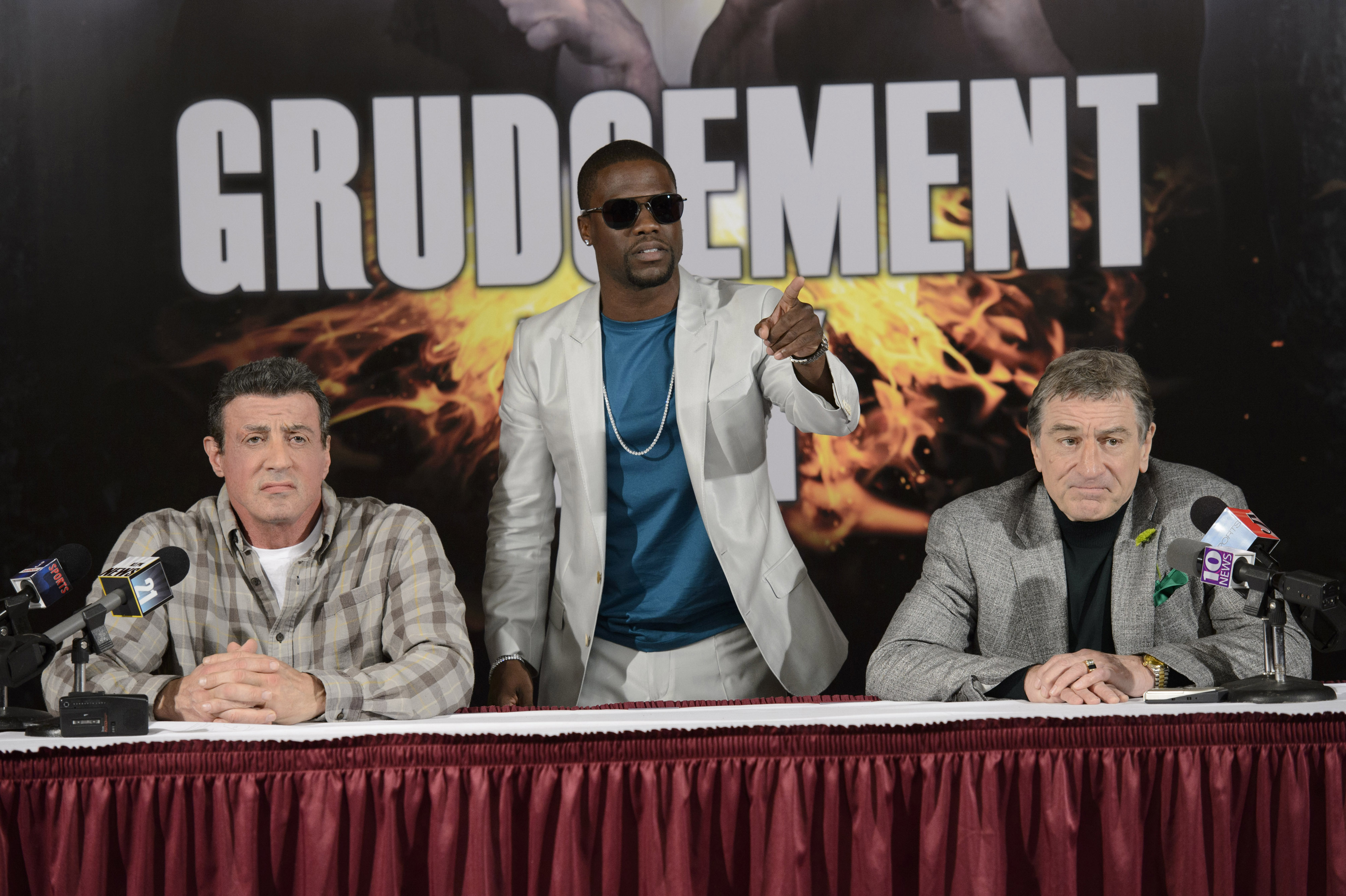 Grinning, De Niro says: “If something had come along, we would’ve done more before, so you never know if it’ll happen in the future.”

“We’re always looking for something,” adds Stallone, cocking his head towards his co-star. “He’s got a little talent, a few days left in him. I’m trying to use them up as fast as I can, because guys like this come along once in a generation.”