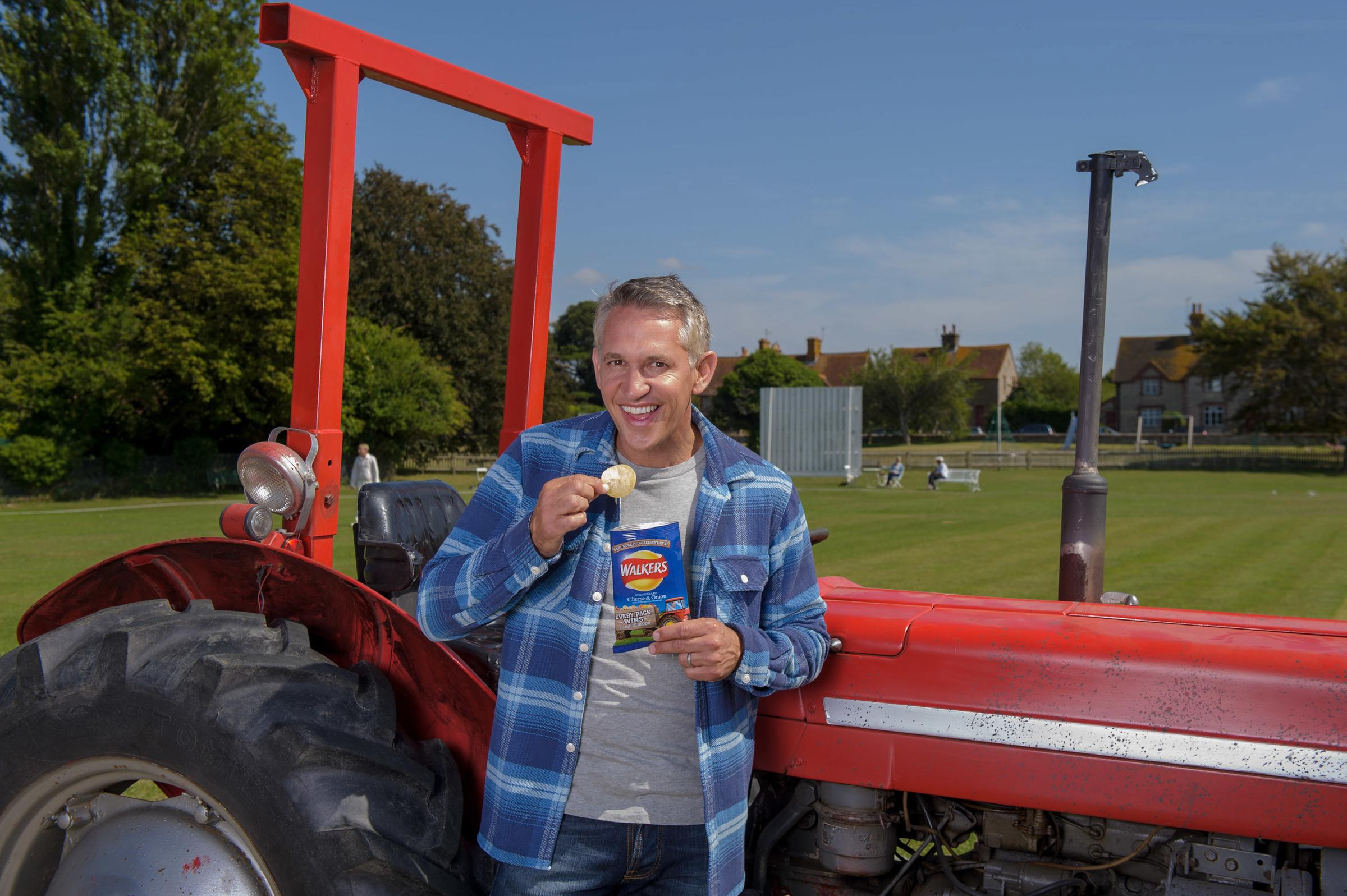 TV presenter and sporting legend Gary Lineker talks to Gabrielle Fagan about how he is tackling the tensions of bringing up teenage boys, coping with ageing and planning a new home

Going grey, coping with the moods of teenagers, and an on-going house renovation could be enough to send an average man spinning into a decline.

The BBC Match Of The Day presenter and father-of-four is taking it all in his stride, proudly professing that juggling lots of balls in the air is what he enjoys.

“My temperament is that I don’t get too down when things go wrong in life, so I’m able to keep life in perspective which is a great thing,” says the 52-year-old.

“Although, according to my wife, I can be a bit grumpy at times, I haven’t really got a temper. I’m fairly calm in most situations.”

Lineker is talking at his rented home in West London where he and his second wife, model-turned-actress Danielle Bux, 34, and her daughter, Ella, 11, are living while renovations are in progress on a new family home.

His sons, George, 21, Harry, 20, Tobias, 17, and Angus, 16, are regular visitors, plus there’s a large unruly dog to add to the mix. But Lineker is composed amidst the chaos, believing it’s worth putting up with the temporary inconvenience and lack of space.

“We’ll be here for a while because the new house is a huge job which has only just started. It’s very exciting and Danielle’s got lots of ideas for it,” he says.

“I don’t have much say over the decor, she does all that, but I’m definitely choosing the very large flat screen for the new media room in the basement. That’s where I’ll chill with my boys and watch football.”

It’s the couple’s fifth house move in the last few years, after they married in 2009, because doing up properties and acting are twin passions for Danielle. She made her debut in the stage show, Calendar Girls, recently appeared in BBC’s Silent Witness and a play, Responsible Other, and is currently filming in Los Angeles.

Lineker’s in charge of his step-daughter while Danielle’s away and says: “I’m very happy to do that so Danielle can go off and pursue her dreams. I’m so proud of her because she’s worked her socks off to try to make her way in a competitive industry, which she entered relatively late in life compared to most people. She’s really driven and passionate about it.

“Would we like our own kids together? Not at the moment, as Danielle’s engrossed in building her career but maybe in the future, we’ll wait and see.

“Of course, Ella and I are missing her but we have a lot of fun together. She’s a sweetheart and I have a great relationship with her. Although I’m bracing myself because she’s coming up to the teenage years soon so she’ll probably change,” he sighs.

At least he will be well-prepared when she starts on the rocky road of adolescence. “My boys are still firmly in the teenage years. I think boys mature a lot slower than girls. It’s a difficult phase for any lads at that age, turning into young men and deciding what they want to do with their lives,” he says.

“Also it’s particularly tough these days. You worry about the lack of jobs and whether they’re going to be able to afford to live anywhere. I try to be there for them, to guide and steer them, and tell them things they don’t necessarily want to hear!

“They’re good lads but typical teenage boys who don’t particularly want to listen or talk on occasions. You just get ‘Oh, Dad!’ and a roll of their eyes if I say something – but it doesn’t stop me.”

The former Leicester City, Spurs and Barcelona striker, who played for England, says it’s unlikely any of his sons will follow in his footsteps.

“To be honest I wouldn’t particularly want that for them. Unless you’re unbelievably talented, I think it’s quite hard for the son of a top sportsman to deal with all those comparisons and that ‘you’re not as good as your dad’ nonsense,” Lineker says.

“Harry’s a good player but he’s not driven by it and Tobias, who loves it, has had knee problems over the last two years which have slowed him down. I’m just happy that they all love their sport but I doubt their careers will be sport connected.”

Lineker’s own popularity has of course extended beyond sport, in part due to Walkers Crisps. Since 1995 he’s starred in a succession of hugely-successful commercials poking fun at his ‘squeaky-clean’ image – throughout his 16-year playing career he was famously never booked or sent off. 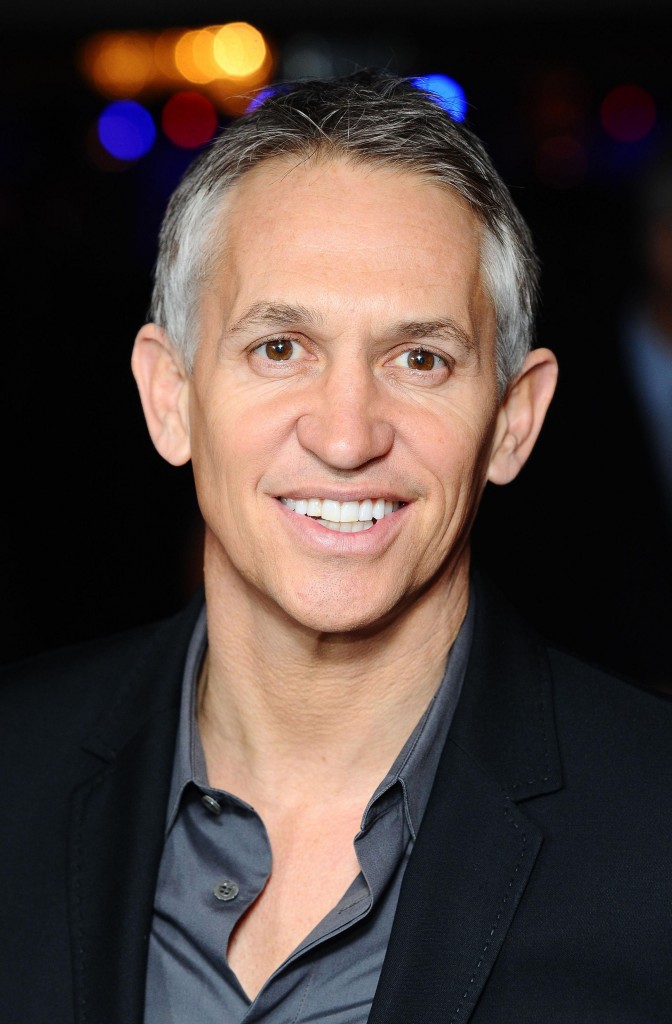 “It was good fun filming it driving around on a tractor and there were a lot of laughs. I like getting outdoors and away from the TV studio, and going to different locations,” he says.

That said, his personal training – which he takes very seriously – is mainly done indoors, three times a week with a trainer.

“I’m in decent shape for an old boy. I don’t feel much different to when I was in my thirties, but looks-wise? Well, probably with the grey hair, about 63!” he jokes. “Actually, I’m probably in better shape than most 20-year-olds. I’m still the same weight as I was as a player but thanks to weight training my body’s actually a better shape now.”

He has good reason to keep this body – and face – in good condition. Lineker ecently signed a new contract with the BBC, reportedly worth around £1.5 million, to remain as the cover-boy of its flagship football show, and to present its coverage of the 2014 World Cup in Brazil and beyond.

There was reported criticism of the amount – saying he was being paid a footballer’s wages for doing a pundit’s job. His personal wealth has been estimated at £30million.

“Stories about what I earn and what I’m worth are always wrong, they always make it sound a lot higher than it actually is. It’s mildly irritating,” he says.

“Frankly, you can never justify the salaries given to those who are at the top of the tree in entertaining or sport to ordinary people who are doing proper jobs. But it’s just the way of the world.”

His awareness of his own good fortune was reinforced when he took part in BBC’s Who Do You Think You Are? series and found that one of his ancestors, James Pratt, was so desperate to feed his family that he stole rabbits and chickens and ended up in prison.

“It was a very sad and poignant story of desperation – after all, most of us would do anything to keep our children fed,” he says.

“I’m fully aware that I’ve been hugely fortuitous in having a talent for playing football and without that gift, and a lot of hard work, I wouldn’t have the life I’ve enjoyed.

“I’m very happy, love my career and certainly have no plans to retire. I’ve got no desperate desire to branch out into other areas of entertainment. I think I’ve got a bit of a niche because I’m one of the few commentators who’ve played the sport at the top level, which gives me a big advantage.

“I was brought up by my dad to give everything my best shot and that’s what I’ve always done – and what I’ll keep on doing.”

:: INFORMATION: To join the hunt for Walkers’s delicious home grown ingredients and uncover millions of amazing rewards go to www.walkers.co.uk.

Denis Sullivan
29th Oct 2013
0
Thanks for voting!
Gary is a great role model for young aspiring athlets
ReplyFlag as inappropriate