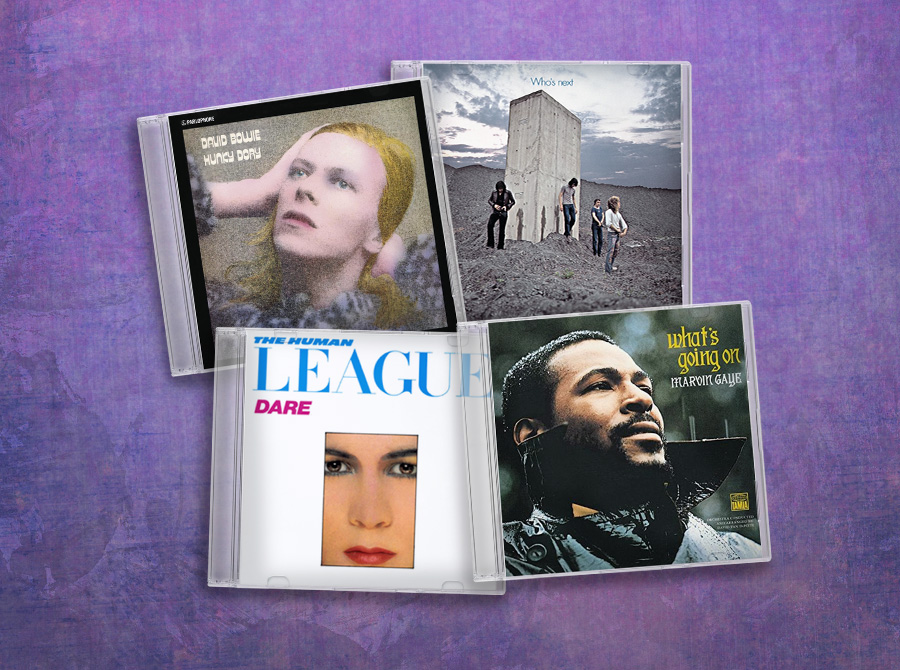 These classic albums sound as good as ever, decades on.

Starting all the way back in the 1970s, we begin with one of the greatest bands to emerge from the psychedelic rock era of the late ‘60’s.

First released in 1971, L.A Woman is the sixth album from The Doors.

Fronted by charismatic lead singer, Jim Morrison (the last album he would sadly feature on before his sudden death), this a must-listen for fans of the band.

Highlights across the album to keep an ear out for include “Love Her Madly”, “L.A Woman” and the iconic “Riders on The Storm”.

The second album from singer-songwriter Carole King is another great from 1971.

One of the best-selling albums of all time, Tapestry brought Carole stardom.

Listen out for the wonderful title track, “Tapestry” during your listen through.

Following up The Man Who Sold The World released in 1970, 71’s Hunky Dory is a pop rock masterpiece.

Marking the start of a journey that would eventual lead to Bowie’s alter ego Ziggy Stardust, Hunky Dory’s “Changes” and “Oh! You Pretty Things” are early highlights.

Of course, discussing this album would not be complete without a special mention of “Life on Mars”, Bowie’s voice and Rick Wakeman’s lovely piano is instantly recognisable.

The eleventh album from Soul legend Marvin Gaye, What’s Goin’ On is one of the greatest albums of all time.

Turning 50 this year, timeless tunes including “What’s Going On” and “Inner City Blues (Makes Me Wanna Holler)” are beautiful tracks worth revisiting.

Opening with “Baba O’Reilly’ slowly building up momentum before Pete Townsend’s guitar and Roger Daltrey’s vocals come thundering in, Who’s Next is celebrating its 50th anniversary this year!

Revisit a host of tracks including “Behind Blue Eyes”, “Love Ain’t For Keepin” and the grand album finale – “Won’t Get Fooled Again”.

Jumping a decade on and a just a year before “Rio” hit the airwaves, Duran Duran’s debut is impossible to ignore.

Going on to be one of the leaders of the New Romantic movement, their debut opens with “Girls On Film” and the synth-led “Planet Earth”.

Remember the clothes, the style (and the haircuts!) when Duran Duran burst onto the scene in the early 1980s.

The third album from The Human League, Dare saw the band shift to a more pop-friendly sound.

The result? Global hit “Don’t You Want Me”, “Love Action (I Believe in Love)” and “Seconds” and more on a highly influential album famous for its iconic cover alongside the music.

8. The Police – Ghost In The Machine

Summers on guitar, Copeland on drums and Sting at the front. The Police, one of the greatest music trios of all time released Ghost In The Machine in 1981.

After winning two Grammys, following up Zenyatta Mondatta was no easy task.

Recorded throughout the year, Ghost in the Machine gave The Police a number of hits on both sides of the Atlantic including “Spirits in the Material World”, “Every Little Thing She Does Is Magic” and “Invisible Sun”.

Add to your CD Collection

Explore our complete CD range at the Silversurfers Shop.

Some of our favourite hits from 1974
JOIN SILVERSURFERS AND...