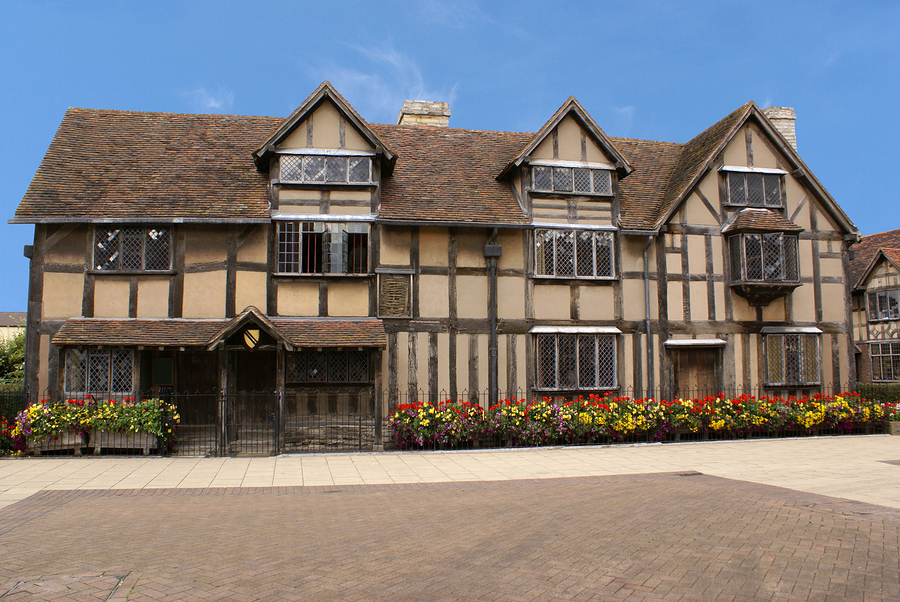 Shakespeare and Stratford .. a perfect combination

A short break in the quintessential English town of Stratford-upon-Avon, set in the beauty of the Warwickshire countryside, is an ideal destination to unwind.

Take a leisurely stroll down cobbled Henley Street, drop into Shakespeare’s birthplace on the way to the River Avon and then gaze in wonder at the impressive newly built Royal Shakespeare Theatre.

By being the birthplace of the world’s most famous playwright , William Shakespeare,  450 years ago Stratford-Upon-Avon is destined never fade into obscurity.  Fortunately, the town’s planning council has had the good sense to keep the essence of Ye Olde England within the town’s centre and many of the places on your “must see” list are within a short walk of each other.

Walking along Waterside past the Royal Shakespeare Theatre, soaking in the atmosphere of a town steeped in history, you will come to the Holy Trinity Church where the Bard is buried. A little further on is the remarkably well-preserved Anne Hathaway’s cottage (Shakespeare wife’s childhood home) on Shottery Road about a mile away. The cottage can be easily reached by car as well (parking is available) and if in the car you can carry on to Mary Arden’s (Shakespeare’s mother) childhood farm in the village of Wilmcote – a short drive away. However, the farm can reached on foot and the walk from the town is a pleasant one. It’s approximately three miles from the centre. For those who are without a car or have difficulty walking, trains from Stratford-upon-Avon stop at Wilmcote railway station, which in turn is situated directly opposite the farm.

Since its conception in the early 19th century, The Royal Shakespeare Theatre has become a place of world renown. Two years ago, work finished on the transformation from the 1928 art-deco style structure to the new building fit for the next 450 years. It was literally rebuilt brick by brick, with the use of the original stone, and houses both the main theatre and the smaller Swan theatre. It  was opened with great pomp & ceremony in November 2011.

Not only can visitors to the theatre watch the magnificent productions of resident Royal Shakespeare Company,  but can also enjoy a fascinating backstage tour including an exciting ride to the top of the tower with majestic views over Warwickshire – just beautiful and highly recommended on a clear day.

The Royal Shakespeare Company’s 2013 Season is, as always, crammed with a mixture of the old and new. The Winter’s Tale opens in January, followed by Hamlet, As You Like It and All’s Well That Ends Well.

Next door in  The Swan Theatre, productions include the world premiere of new play The Empress a story of Queen Victoria‘s growing attachment to one of her Indian man-servants. After this, drama moves in with Shakespeare’s Titus Andronicus, Jacobean comedy A Mad World My Mastersand then another new play Candide which is penned by RSC Playwright in Residence, Mark Ravenhill and written as a response to Voltaire’s famous novel.

Stratford-Upon-Avon is a beautiful historic town and the perfect destination for a short break or theatre break. A wide range of excellent accommodation is available to suit all budgets from the 4 star style and sophistication of The Stratford Hotel and the cosy Tudor architecture of the centrally located Legacy Falcon to the 3 star comfort of the Best Western Grosvenor on the Warwick Road.

Simon Harding runs www.theatrebreaks.co.uk, the home of the original London theatre breaks company. He also recently wrote London Theatre and Theatre Breaks, a downloadable guide to getting the best out of London’s Theatreland