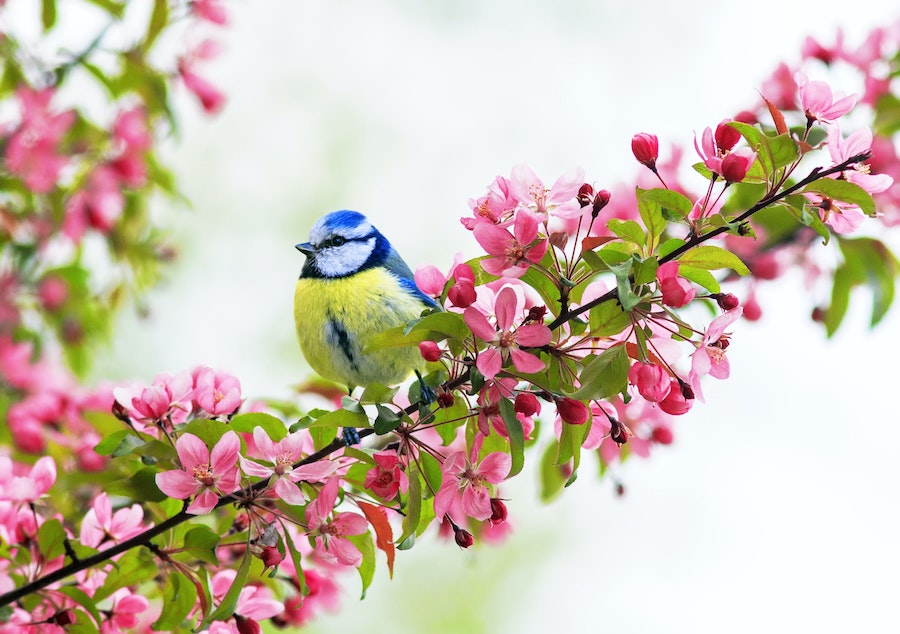 10 common garden birds you can easily identify from your window

There’s nature all around us, even in quarantine

Lockdown can feel rather lifeless, particularly if you don’t have a pet, but there’s no end of nature outside our windows to help us make it through.

We’re going to guess that you already know your magpies, pigeons and robins, so here’s how to identify a few other birding staples you might be able to spy from your front room…

Just as common as their name suggests, chaffinches are ten a penny in gardens, parks and fields, and males are especially easy to identify thanks to their rosy orange plumage and metallic grey crown. Once popular as caged songbirds, they have a loud song and varied calls so you may well hear a chaffinch before you see it.

An attractive songbird with a bright red face and vibrant yellow bars on its wings, goldfinches are instantly recognisable both for their looks and their lyrical, lilting call. Their long, pointed beaks allow them to extract seeds from kernels that would defeat other finches, and thrive as far afield as New Zealand, Egypt, and Brazil.

Something of a standard-bearer for garden birding, the blue tit is an energetic little character, easily recognised by its sky blue cap, deep blue tail feathers, and bright yellow breast. Acrobatic birds that will happily hang upside down when looking for food, blue tits are regular visitors to any bird feeder, and will snap up vacant nest boxes in a trice.

The largest member of the tit family (though that’s not saying much), the great tit sports a distinctive black stripe down its midriff, along with a jet black head and white cheeks. Less mobile than its blue-crested brethren, the great tit spends more time finding food on the ground, and can be very territorial at the bird table.

Though from the same family as the crow, raven and jackdaw, the jay has little else in common with its dark-coloured corvid cousins. Instantly identifiable thanks to their orange plumage with splashes of electric blue, jays are shy and retiring but have an abrasive, shrieking cry – so this is another bird you’ll likely hear before you see. Expert foragers, jays will plan ahead by burying stashes of acorns to help them through sparse winters.

An unobtrusive brown bird easily mistaken for a sparrow or wren, the dunnock is a solitary creature, often seen in scrubby terrain such as hedges and bramble patches. Look for the black streaks in its otherwise brown plumage, and a light grey undercarriage. The reddish eyes can give the dunnock a slightly sinister look, but this insect-eating songbird would only hurt a fly.

Barely heavier than a sheet of A4 paper, this minuscule bird flits from branch to branch searching for bugs and small spiders, and can be identified by the vertical gold head stripe from which it gets its name. Adorable, fluffy, and almost spherical, the goldcrest looks somewhere between a bird and a Christmas bauble.

Starlings are often mistaken for blackbirds, but on closer inspection it’s difficult to see why. While blackbirds are true to their name, starlings spend the breeding season covered in small white spots, and have a glossy, blue-green tinge to their plumage which can glitter gloriously at dawn or dusk. In late autumn, starlings flock together into murmurations hundreds of thousands strong, and wheel back and forth creating undulating patterns in the sky.

A close relative of the pigeon (both feral and wood), this elegant dove sports pale pink-grey plumage, crimson eyes and feet, and a distinctive collar not unlike that of a vicar. Often seen in pairs, this monogamous species tends to nest in close proximity to humans, and is famous for its characteristic cooing call.

Heavily speckled with black spots covering breast and neck, the song thrush is a yellowy-brown bird similar to the blackbird in shape and size. An omnivorous forager, the thrushes are often found beneath bushes and trees, and will hunt snails by dashing their shells against nearby rocks. The thrush’s melodious song has made it a popular pet in times gone by, and a muse for a host of romantic poets.

How many of these birds visit your garden?

cathychaos
26th Apr 2020
0
Thanks for voting!
We are very lucky in our garden and get quite a variety. To date, as well as the ones mentioned. Bullfinch, Great spotted woodpecker, magpie, robin, wren, long tailed tit, cold tit, a glance of a sparrow hawk, just missing some food. That's in West Yorkshire.
ReplyFlag as inappropriate

gypsy47
23rd Apr 2020
0
Thanks for voting!
Love the photos and descriptions of the garden birds. Sparked my interest in looking out for them in my garden now.
ReplyFlag as inappropriate

Felix1
20th Apr 2020
0
Thanks for voting!
I am lucky living next to an ancient wood. I feed a stray cat but he has tough competition from crows and magpies. Jays, pigeons, doves, blackbirds plus a multitude of small birds visit. Occasionally a red kite or two fly over. I am blessed. The odd squirrel too. In times gone by there would be half a dozen in my garden at a time but they seem to have disappeared, maybe one or two now. Not forgetting the big dog Fox I saw loping along in the early hours. A little bit of heaven.
ReplyFlag as inappropriate