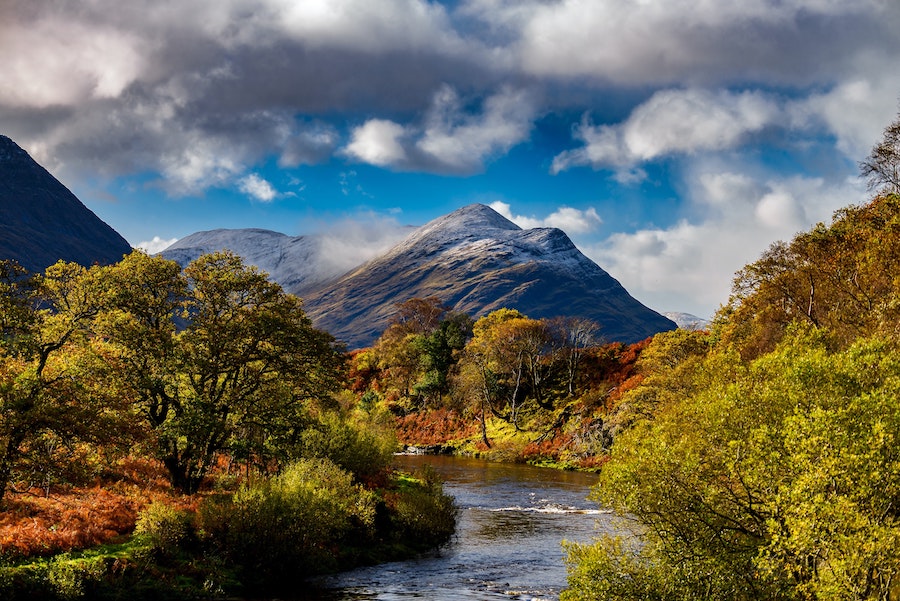 7 spectacular beauty spots in the UK and Ireland

Rightly or wrongly, Britain and Ireland are not known internationally for their stunning scenery. There’s an attractive lake here, a few rolling fields there, but to outside eyes, neither nation measures up to, say, the canals of Venice or the beaches of the Caribbean.

With staycations the order of the day though, it’s time to turn this reputation around.

Here are some bewitching beauty spots on both sides of the Irish Sea, from magnificent mountains to wild wild woodland…

An absolute shoo-in at the top of our list, and a landmark stop on the Wild Atlantic Way, these rugged rock faces plunge more than 200 metres into the sea, and wow tourists mostly with sheer, overpowering scale.

The cliffs claim borderline celebrity status thanks to starring roles in The Princess Bride, Leap Year, and Harry Potter And The Half Blood Prince, and with around 1.5 million visitors a year, you’re unlikely to have the views to yourself.

Specifically designed to be as picturesque as possible, architect Sir Clough Williams-Ellis spent five decades carefully constructing Portmeirion, and was 90 years old when he finally declared himself satisfied.

A whimsical, Italianate village on the North Welsh coast marked by pastel-coloured cottages, exotic flora, and elaborate water features, the finished article is strangely surreal, and steeped in what Sir Clough called, “That strange necessity”: beauty.

Nearly as pretty as Portmeirion, and far less artificial, the effortlessly aesthetic waterfront of Cobh comes with vibrant, colourful facades, bundles of greenery, and a seaside cathedral boasting a whopping 49 bells.

Once the final port of call for the Titanic, for today’s visitors it’s a haven of tranquillity, if you can stomach the numerous cruise ships that still sample its wonders in a normal year.

Overflowing with possible picks, you could throw a dart at a map of Skye and odds on it would land somewhere spectacular. We could have gone for the ethereal rocky spikes of Trotternish Ridge, the chocolate box waterfront at Portree, or the plunging waterfall at Kilt Rock.

Instead, we’ve plumped for the fairy pools, an exceptionally photogenic tumble of water from the Cuillin mountains into a series of crystal clear lagoons. It’s an excellent place for wild swimming – if you can handle the blistering cold.

The jewel in the Lake District’s crown, Lake Windermere is the largest, prettiest, and probably best-known of the area’s sixteen main lakes, acknowledged as part of the inspiration behind Swallows And Amazons by Arthur Ransome.

A staycation hotspot since the mid-19th century, the lake comes into its own at morning and evening, when light breaks across the neighbouring ridges and sets the water’s surface aglow.

Not so much a ‘spot’, as a collection of hills, lakes and vistas, any part of which could constitute a ‘spot’, Connemara is a west coast hinterland that houses some of the most attractive landscapes in Europe, let alone Ireland.

The highlight reel contains the hiking trails on the quartzite mountain range the Twelve Bens, the granite facade of Kylemore Abbey, reflected in the waters of Pollacapall Lough, and the pristine twin beaches at Roundstone.

An impenetrable web of writhing branches covered in a thick layer of moss, Wistman’s Wood comes at you straight from the pages of a fairy tale. Age has twisted the old oak trees like so many circus contortionists, and when the mists descend, the wood looks near-supernatural.

A remnant of the ancient forests that covered Dartmoor in prehistoric times, it is said to have been a sacred spot for Celtic druids, and locals will tell you any number of tall tales about hell hounds, ghosts and ghouls.