Menu
Articles
Articles Entertainment & NewsAperol at 100: How an Italian apéritif became the unofficial taste of summer 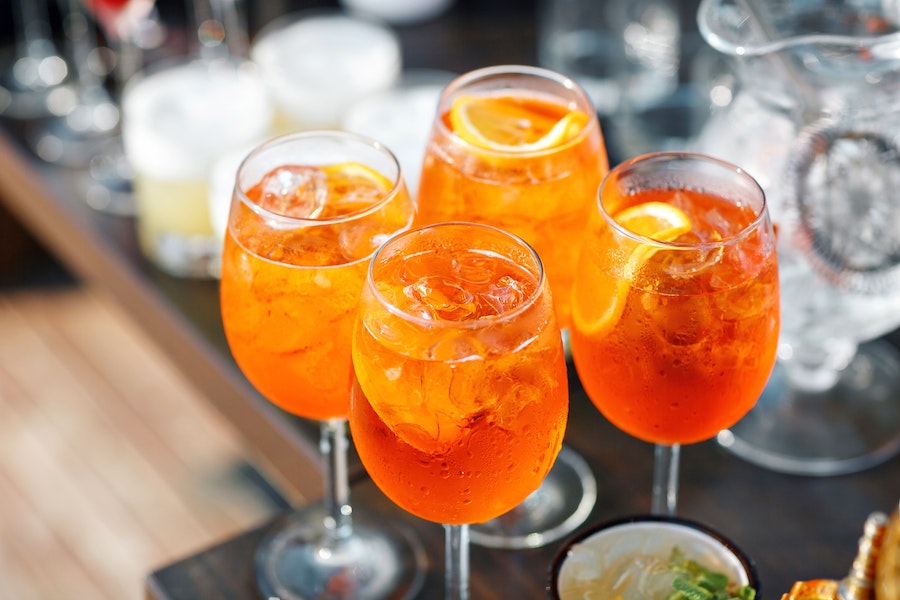 Aperol at 100: How an Italian apéritif became the unofficial taste of summer

Typically consumed in the glow of a long summer evening, preferably at a garden party or weekend barbecue, Aperol has become a sun-soaked staple in bars across the land.

To mark its 100th birthday, we traced Aperol back to its interwar roots, to see what made us fall in love with so-called ‘sunshine in a glass’…

An orange wave
Aperol is certainly tasty, but that’s not the only, or perhaps even the main reason for its success. Its bright orange colour glints alluringly in the summer sun, while the simplicity of a spritz – Aperol, Prosecco and soda water – makes it an easy favourite during lazy afternoons.

These days, while almost everyone has heard of the Aperol Spritz, for many the drink feels relatively recent. Even in 2012, the International Bartenders Association categorised the 93-year-old beverage as ‘new’, and international acclaim has only really come in the last 15 or 20 years at most.

Such a meteoric rise was always going to attract attention, and earlier this year the New York Times published an unusually targeted hit-piece entitled The Aperol Spritz Is Not A Good Drink (“It’s like a Capri-Sun after soccer practice on a hot day – and not in a good way”), prompting outrage from Aperol advocates everywhere.

Chief among them were the Jonas Brothers, perhaps the brand’s most famous super-fans, who “highly disagreed” with the piece and posted a pic of their spritzes on Instagram. Buzzfeed Europe Editor Alberto Nardelli described the article as “the worst opinion of 2019”.

All publicity, it seems, can be good publicity. Within a week, Aperol execs threw a hastily organised ‘Aperol Spritz Rally’ in a bar in Brooklyn, complete with free sunglasses and discounts for those dressed in orange.

The affair brought into focus another major reason for Aperol’s recent successes – its exceptional marketing department.

Humble origins
First launched at the Padua International Fair in 1919, the first ever bottle of Aperol was crafted by brothers-turned-business partners Luigi and Silvio Barbieri. Their father, the equally Italian-sounding Giuseppe, owned the local distillery, and is credited in some quarters with a hand in the drink’s creation.

Now almost synonymous with its signature cocktail, the Aperol Spritz, the idea originally came from Austrian soldiers stationed in Italy through the late 19th century.

Finding the local elixirs a little too formidable for their tastes, they would reportedly dilute Italian wine with sparkling water or soda (the word ‘spritz’ actually comes from the German word ‘spritzen’ – to spray).

At 11%, Aperol was and is a light liqueur that lent itself to longer, more regular drinking sessions, and swiftly became a tipple of choice among athletes and women. Crafted with oranges, rhubarb, and a mysterious array of herbs – it was quite unlike the eggnog-based drink for which the family was previously known.

Initial successes were local, and Aperol swiftly found an audience in its native Veneto region – still its spiritual home.

The long road to recognition
During the 1940s, Aperol factories were among those pummelled by Allied bombardment, and production took several years to return to pre-war capacity. It was during the Fifties that the spritz as we know it today took shape – three parts Prosecco, two parts Aperol, and one part soda water, preferably garnished with a sliver of orange peel.

The exact ingredients of Aperol itself are still a closely-guarded secret, and are thought to have remained unchanged to this day.

Though almost synonymous with Venetian boozing, Aperol spent most of the 20th century as a largely Italian, even Northern Italian, phenomenon. It was not until the drink was bought by Campari in 2003 that it began to cause ripples on the international scene.

The following years brought partnerships with Manchester United and the San Marino Grand Prix, and a full redesign on label and bottle. In 2012, 2,657 people gathered in the Piazza San Marco in Venice, to set an official Guinness World Record for the ‘largest Aperol Spritz toast’.

Along with the approval of M&S and the Jonas Brothers, and the disapproval of the New York Times, the Aperol Spritz entered 2019 as the ninth most popular cocktail in the world.

The drinks market can be a fickle creature, but for Aperol, the future’s bright. The future’s orange.

Have you tried an Aperol Spritz?