Menu
Articles
Articles Entertainment & NewsWhat are false widow spiders, and should we be worried about them? 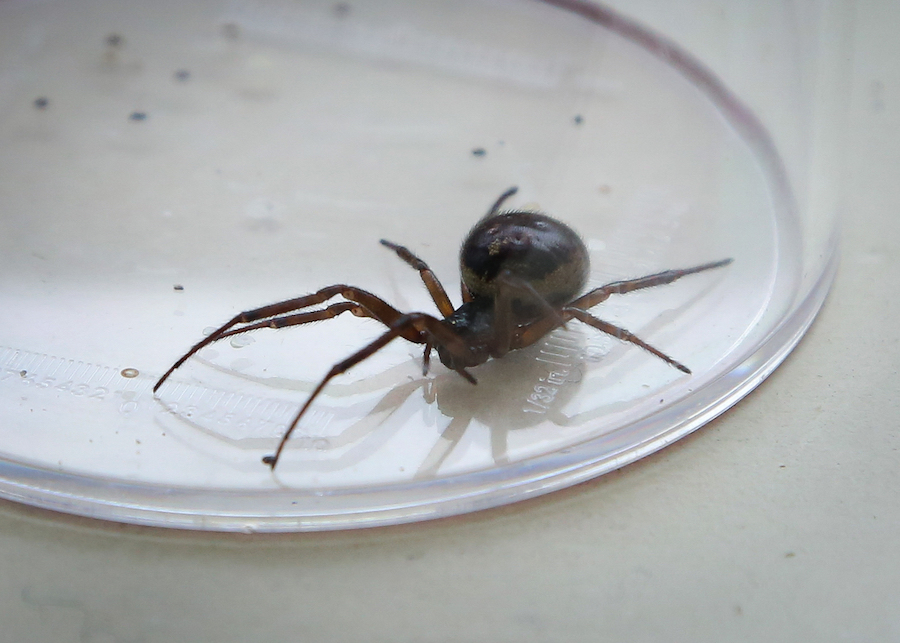 What are false widow spiders, and should we be worried about them?

If the headlines are to be believed, a biblical plague of false widow spiders is covertly infiltrating UK homes, with the sole purpose of feasting on your flesh.

Scores of photos have emerged in recent weeks of stricken victims and scary wounds, while in October of last year nine London schools temporarily shut their doors after apparent infestations. But are the spiders really as scary as these stories suggest?

What are false widows?

Specimens range from 7mm to 14mm in length, and can be identified by the cream-coloured patterns on their otherwise dark abdomens, and mottled, brown-shaded legs. It perhaps doesn’t help the false widow’s reputation that the marks on its back are often said to resemble a skull.

Its name derives from a clear resemblance to the dreaded black widow spider, but the UK critters have little in common with their Australian namesakes. The spiders are not typically aggressive, and only stray from their webs to mate.

Traditionally found in clusters across the south and south east of the UK, the false widow is slowly spreading across the the country – likely due to the rising temperatures associated with climate change.

How bad are their bites?

In theory… not very.

The Natural History Museum describes the nips as “small and relatively harmless” causing “pain at the site… lasting between one and 12 hours” – often no worse than the sting of a wasp. The false widow is one of 10-12 species of spider known to have bitten humans, all of which will hurt but little more.

But if false widows are so harmless, how do you explain the widely-circulated photos of leg lacerations, immobilised victims, and rotting necroses?

The danger from false widows – and the source for most of the horror stories – is infection or, in rare cases, allergic reaction. According to the British Arachnological Society (BSA),”Serious problems with spider bites are only likely to arise if the bite becomes infected, or if the person is already weakened by other health issues.

“As with any other injury, if swelling or ulceration results from a suspected spider bite you should seek immediate medical help.”

How worried should we be?

It’s true that false widows are Britain’s most venomous spiders – admittedly, without major competition – but there’s probably no need to retreat to your panic rooms just yet.

The critters have been native to the UK for roughly the last 150 years, and though they tend to spend more time indoors come autumn, they’re present in your home all year round. Supposed bites are usually reported without clear identification of the culprit, and experts have long voiced doubt over whether the spiders are necessarily to blame.

The BAS has described media hype surrounding the spiders as “wildly inaccurate”, “beyond reason”, and “misleading and plainly wrong.”

Sufar
14th Sep 2019
0
Thanks for voting!
I was bitten by a false widow on my breast about 3 years ago. I killed the spider but it was still intact so I was able to identify it from pictures on the internet. There were 4 bite marks resulting in 4 blisters. They were very sore and even now I occasionally get a slight pain from that area like a mild wasp sting.
ReplyFlag as inappropriate