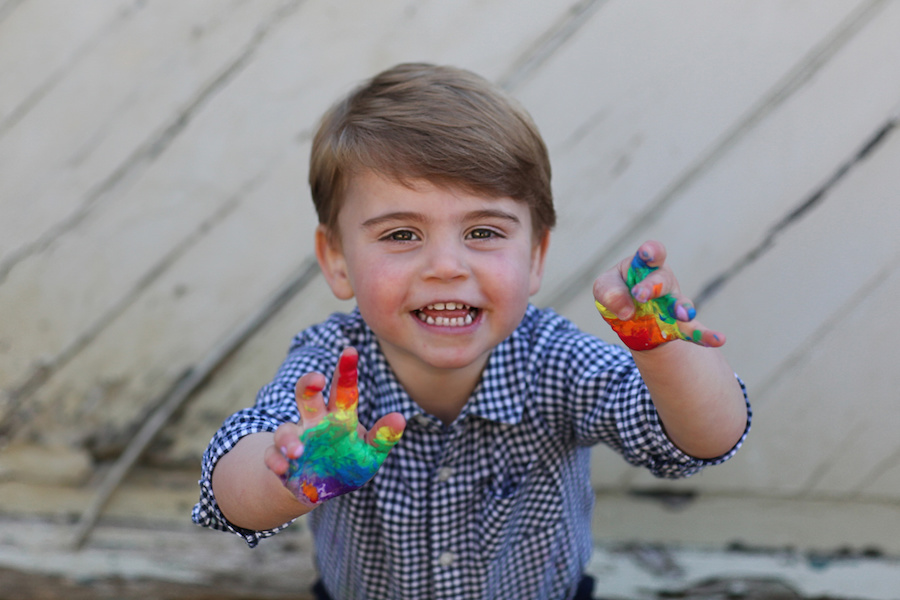 Prince Louis of Cambridge, who is celebrating his second birthday on Thursday, was born on patriotic St George’s Day in 2018. 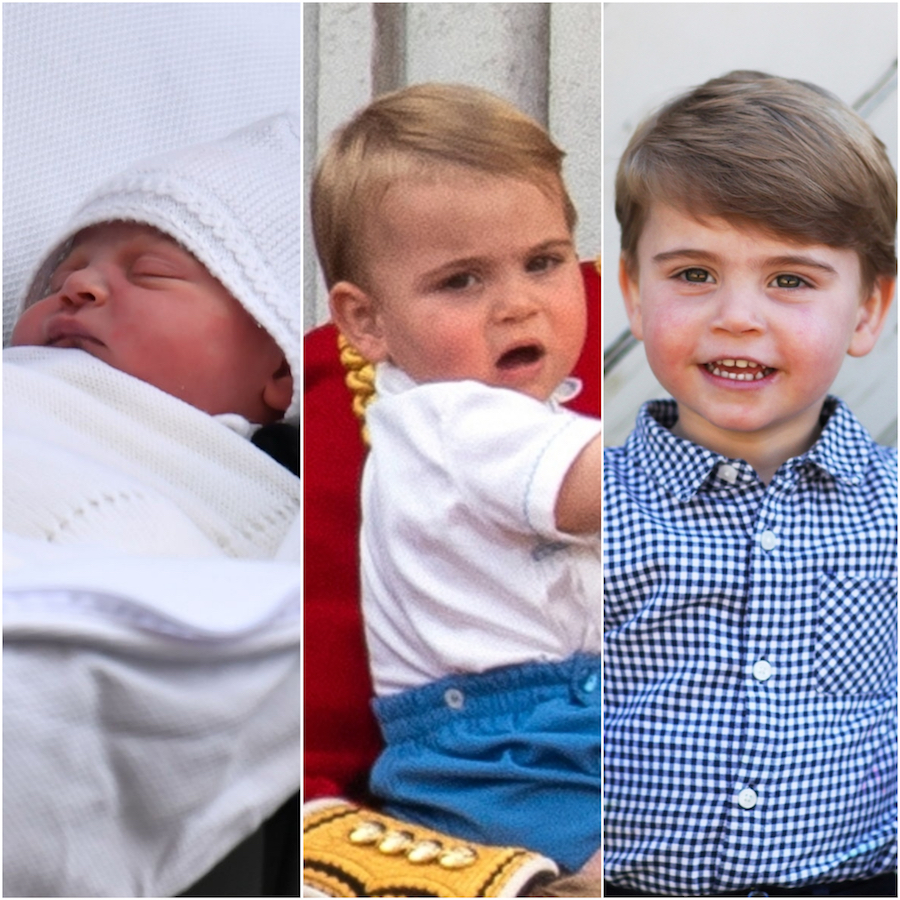 New photos released to mark Louis’ milestone showed how much the young royal has grown.

The prince, whose brown hair was brushed into a side parting and who was dressed in a blue and white gingham shirt, delightedly showed off his paint covered hands as he made a rainbow hand-print for his window.

He is fifth in line to the throne, a great-grandchild of the Queen and the Duke of Edinburgh – and a younger sibling of Prince George and Princess Charlotte.

The prince, who weighed 8lb 7oz, made his debut as a newborn in Kate’s arms as his proud parents showed him off to the world on the steps of the Lindo Wing of St Mary’s Hospital in Paddington, London, just hours after he was born.

The name Louis was already one of George’s middle names and pays tribute to the Prince of Wales’s great-uncle, Earl Mountbatten, who was murdered by the IRA.

William and Kate released photos of their son soon after – including one of him being cuddled by his big sister Charlotte on her third birthday when Louis was only about a week old.

Louis was sleeping soundly, as Charlotte put a protective arm around her baby brother and planted a kiss on his forehead.

The prince was next seen fast asleep at his christening in July.

He was baptised at the Chapel Royal, St James’s Palace, and his godparents include Guy Pelly – who was once dubbed William and the Duke of Sussex’s “court jester” for his wild ways.

Louis has inherited the brown Middleton eyes, dark brows and button nose from Kate’s side of the family.

He was pictured with his royal relatives, including the Duke and Duchess of Sussex and the Prince of Wales and the Duchess of Cornwall, in photos released to mark Charles’s 70th birthday in November 2018.

Later the same month, Kate revealed as she met the public during a visit to Leicester University: “ I can’t believe he’s seven months now. He’s getting a big boy.”

Sporting a grin, the prince was shown surrounded by his siblings and parents in the grounds of Anmer Hall in Norfolk for the family’s official Christmas card in 2018.

In March 2019, Kate revealed on a visit to a children’s centre that Louis, then about 11 months old, was “bombing around” on a walker.

He turned one in April 2019, with William and Kate releasing images of their youngest, showing his rosy cheeks and two bottom front teeth.

There was a family outing for the Cambridges when they all explored Kate’s Back To Nature garden at the Chelsea Flower Show in May.

Louis was seen toddling around and having a go on the rope swing, as did William.

The children had all contributed to their mother’s garden.

They collected leaves, moss and twigs in the months before – and Kate incorporated the foliage into the surroundings of the campfire.

The prince made his first appearance on the Buckingham Palace balcony for the Trooping the Colour celebrations in June.

He sucked his thumb and clapped and waved at the crowds to the delight of Kate.

Louis was also seen running around at the King Power Royal Charity Polo Day in the summer, and sat on Kate’s lap as the duchess and her children enjoyed a picnic, with George sitting in the back of their car.

The prince, who is growing up mostly away from the media spotlight, was pictured months later arriving for the Queen’s Christmas lunch at Buckingham Palace.

The 20-month-old royal was driven to the annual family gathering by his mother.

Kensington Palace wished its Twitter followers Merry Christmas with a black and white image of the Cambridge children and their father.

William, who was wearing a flat cap, was shown kissing Louis’ cheek in the image taken by Kate.

And Louis proudly joined in with a Clap for Carers in March while in lockdown.

The young royal was pictured standing between Charlotte and George as they paid tribute to NHS staff working tirelessly to help those with the Covid-19 illness.

Louis glanced up at both his sister and brother as they were filmed at home by their parents while staying at their Anmer Hall mansion.

Kate has told how she and William are sticking to a “pretty strict routine” for their children while socially distancing at home.

But the duchess confessed: “It gets a bit hectic, I am not going to lie, with a two-year-old.”

Linda Reddin
24th Apr 2020
0
Thanks for voting!
What a handsome little chap Prince Louis is.
ReplyFlag as inappropriate