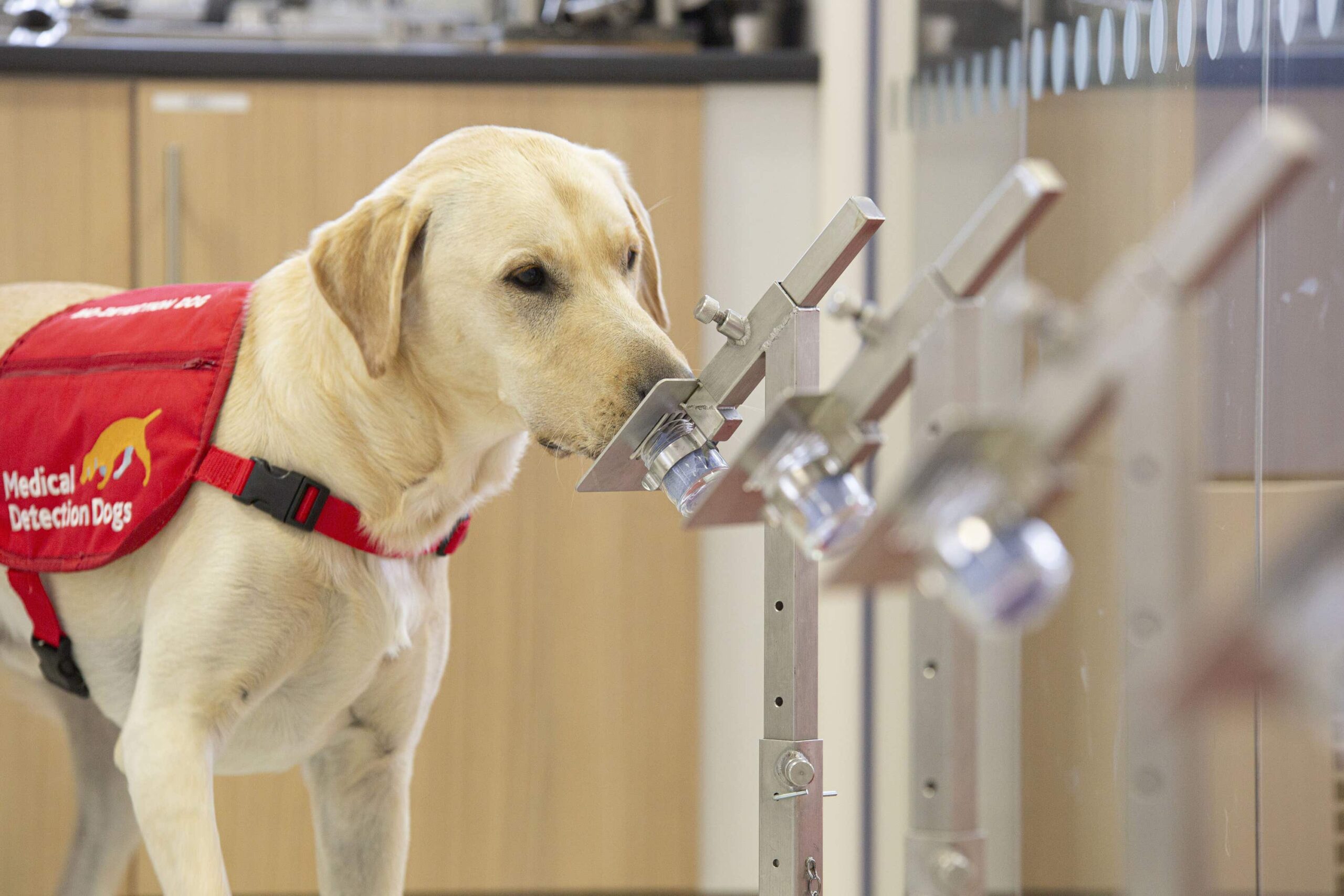 From sniffing out cancer, to transforming the lives of people with chronic conditions, dogs really are a force for better health.

There’s no doubt that cuddling your dog can make you feel better – but it’s not just a feeling. It’s scientific fact that owning a dog can improve both your mental and physical health.

And we’re not just talking about the obvious benefits of taking your dog for regular walks, or the mental comfort of having canine company. Several studies show you’re at much less risk of dying from anything if you own dog. For example, a 2019 University of Toronto study found dog owners have a 24% lower chance of dying from any cause over a 10-year period, and people who lived with a dog after having a heart attack had a significantly lower risk of dying.

If that’s not enough to get you searching for your own furry friend, there’s the astounding work done by medical detection dogs too, who can sniff out diseases ranging from Covid to cancer, and warn owners of impending attacks if they suffer from conditions like diabetes or severe allergies.

“The key to a greater understanding of the diagnosis of human disease could be held in the nose of man’s best friend,” says Claire Guest, chief scientific officer and co-founder of the  Medical Detection Dogs (MDD) charity.

“Bio detection dogs have the potential to save countless lives and transform the future of disease detection with their incredible sense of smell, and medical alert assistance dogs are already saving the lives of people with complex health conditions by warning them of an impending medical crisis, so they can take the necessary action and stay safe.”

Dog lover Kate Leaver has just written a book – Good Dog – about the profound impact dogs can have on our health and lives, sparked by Leaver’s shih tzu Bertie, who helped her through depression. “Bertie’s support, comfort, physical affection and calming presence gave me what I needed to get through a hit of melancholy that severe,” she says. “I had a theory he could smell depression on me – I asked a few canine behavioural experts and they agree it’s possible.

“The health benefits of living with a dog are quite astounding. There are the obvious ones, like how dog people tend to be fitter because they go for daily walks or runs, and we suspect dogs might make us happier or calmer. I find it really validating, as someone who goes on about the cleverness and loveliness of her dog, to have science to back me up too.”

Leaver points out dogs can also have an extraordinary effect on our stress levels, resilience and mental wellbeing, and cites a 2015 Japanese study where researchers looked at how much of the feel-good hormone oxytocin we produce when we’re with a dog. “Turns out, holding eye contact with your pet dog over a half-hour period can increase your oxytocin levels by 300%, and the dog’s levels go up by 130%,” she says. “Oxytocin is known as the ‘cuddle hormone’ and is really important for stress-relief, reassurance and bonding.”

Here, Leaver and Guest outline the work some wonderful dogs do to boost and protect human health…

Pip is a border collie who was trained by his diabetic owner Katie Gregson, now 18, to detect when her blood sugar is too high or low. She watched a YouTube video on how to train a dog as a diabetic alert dog, and learned to put samples of her saliva when she had high or low blood sugar into pots and freeze them. She took them out every day for six months to show them to Pip, and reward her when she showed any interest in them. She then began to hold the pots up to her mouth, so Pip would associate the smell with her.

“Over a period of about 18 months,” says Leaver, “Pip learned to detect that smell, associate it with Katie, and alert someone when she smelled it. When she was ready, Katie got rid of the pots and knew she could rely on Pip to sniff out any change in blood sugar.”

Gregson’s parents say Pip wakes them at least once a week to alert them to changes in her blood sugar. “It’s quite remarkable what they’ve been able to achieve together,” says Leaver, “and a testament to the incredible bond they have, human and dog.”

She points out that a dog’s sense of smell is so accurate, it also has the potential to detect certain types of cancer, malaria, Parkinson’s and even Covid. “They may just be the cutest, least invasive and even most reliable diagnostic tests we have available to us,” says Leaver.

Storm is a big Labrador x golden retriever who’s training to be a Covid-19 detection dog, says Guest. He’s learning the odour of the virus from tiny pieces of shirt, socks and face masks worn by people who tested positive. “Storm comes across big and brave but has a sweet, soft character,” says Guest. “He’s very keen to please and enjoys using his initiative, but at home he loves a good game and is more than happy to settle in a sunny spot and relax.”

Beautiful and cheeky spaniel Jobi lives with the Medical Detection Dogs chair of trustees, Betsy Duncan-Smith. The playful pooch has a favourite toy – a bedraggled cuddly pheasant – which he’s happy to share if it’s returned. But that’s just for his downtime – his work is the very serious business of cancer detection, and Jobi is specifically working on spotting prostate cancer in human samples. “When he finds the odour he’s looking for, he stops in front of it, staring, so his trainer is absolutely clear,” explains Guest. “He then gets a biscuit reward – and he does all of this wiggly spaniel style.”

Noodle is a cute grey schnoodle who works on a dementia care ward as a therapy dog, evoking long-buried memories in elderly patients. Leaver recounts how one elderly lady squealed with delight when the little dog jumped on her bed, and it prompted her to merrily chatter away about her own dog – to the amazement of her son, who hadn’t heard his mother utter a single word for six weeks. “He was delighted, and shocked, and grateful,” says Leaver.

Labrador Henry alerts his owner Lizzie to her condition, postural orthostatic tachycardia syndrome (PoTS), which makes her faint, sometimes several times a day. Before having Henry, Lizzie was often hospitalised and repeatedly injured, but since his arrival this hasn’t happened once. “Henry alerts Lizzie to her condition and gives her a few minutes warning when she’s about to collapse,” explains Guest. “He detects a change in Lizzie’s odour a few minutes before an episode is about to happen, and alerts her by pawing, nudging or jumping up, so she knows she needs to get somewhere safe.”

Good Dog: Celebrating The Dogs Who Change, And Sometimes Even Save, Our lives, by Kate Leaver, available at Amazon.