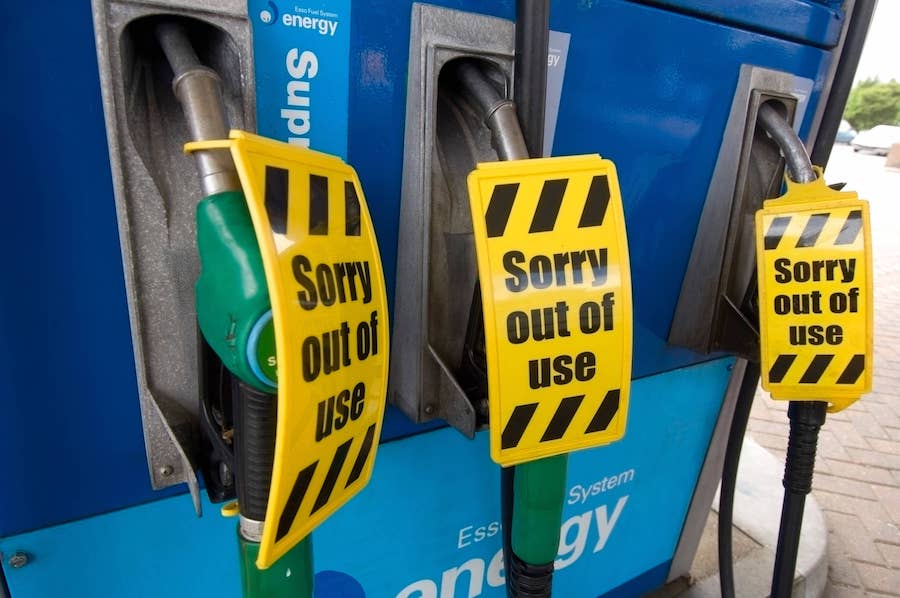 Car owners have been queuing to stock up on fuel amid a shortage of HGV drivers.

Queues of cars have been seen snaking out of petrol stations and thousands of pumps have run dry, as motorists rush to stock up on fuel, following reports of supply issues caused by a shortage of HGV drivers.

This is the latest example we’ve seen of panic buying, and with reports suggesting a lack of CO2 could lead to food supply problems in the coming months, it may not be the last.

So, why do some people feel the need to dash to the shop – or petrol station – and stockpile goods, while others don’t? We asked experts to explain the psychology behind panic buying.


“Panic buying is underpinned by the fear of scarcity,” says Dr Gregory Warwick, chartered psychologist at Quest Psychology Services. “The motivation is for us to panic buy in order feel as though we are back in control of the situation.”

In the case of petrol shortages, filling up your car is how you gain control, explains psychologist and author of The Leader’s Guide to Resilience, Audrey Tang: “It’s ‘I don’t know what’s going on here, everything’s going a little bit crazy, but if I go and get my petrol, I’m in control’.”


While it’s easy to be critical of people queuing for petrol or loading up their supermarket trolleys, remember that it’s not necessarily a rational response.

“I wouldn’t want to have a go at the panic buyers because, in many ways, they’re just alleviating their feelings of threat and fear,” says Tang. “Fear causes us to act in irrational ways. When we feel fear, all we want to do is to not feel that fear anymore.”

Whether it’s due to a real life danger or a psychological ‘threat’ – such as not being able to buy your Christmas turkey – for some people, the stress response feels the same.

Tang explains: “It’s a physiological response to any threat… the body’s responding in the same way – heart rate’s going up, I’m getting sweaty, I’m getting palpitations, I’m feeling very uncomfortable.”

It provides a dopamine hit

Dopamine is “known as the reward chemical, in that it rewards behaviour that makes us feel better”, Tang says. “The act of buying, the actual purchase, it gives us that little bit of a dopamine hit that calms us down.”

And that explains the rush of relief when, for example, you find a filling station that still has petrol after searching for hours.

There’s also an element of herd mentality with panic buying. We might not have been affected by news reports, but when we see queues at petrol stations or shelves being emptied, suddenly the prospect of shortages seems more realistic, even when we’re told to only buy what we need.

Dr Warwick says: “The conflicting information from having the government and media telling us not to, jars with our own sense of seeing everyone else do it and that, in turn, raises our panic and need to go out and panic buy.”

“I believe that panic buying by some and not others, is largely down to how well people are able to manage their anxiety,” says Dr Warwick.

So, what should you do if you’re feeling anxious and want to fill up your petrol tank, even though you don’t really need to?

“Think reasonably about why you want petrol in the first instance,” says Tang. If it’s not essential, why not wait until the supply issues are under control and leave the fuel for key workers and people who really need it?

And have a plan B in terms of transport, in the event that you can’t use your car, she says: “If you do that, then perhaps the urge to buy your petrol becomes less, and you might even have discovered a new way of getting to work.”

If you’re feeling more anxious than usual, it may help to consider your diet, and whether you’re getting enough sleep and exercise.

Tang explains: “All of those things can affect us. Lack of sleep can affect how we process and think about things, and not eating well is going to make us feel uncomfortable and on edge. It’s so easy to to misread signs of physical ill health for mental ill health.”