This site uses cookiesClick here to remove this messageMore information
Welcome to Silversurfers - features, offers, news & social forums for the over 50s...
Silversurfers
Log In Join
Silversurfers
Menu
Articles
Articles Entertainment & NewsTake a look at what series four of The Crown has in store for us 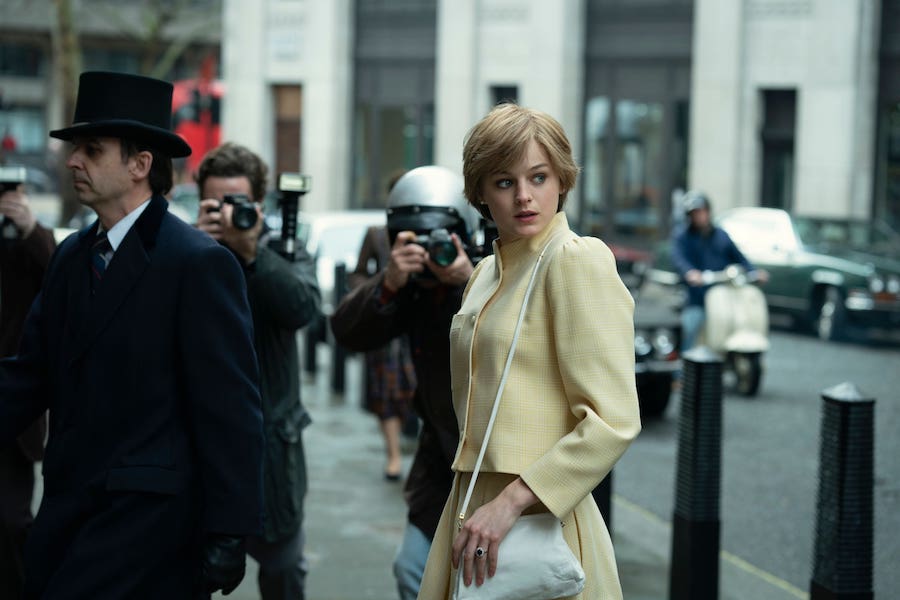 The fourth series of The Crown returns to Netflix this Sunday – with some new members of the cast, we take a look at what to expect from the new season.

Emma Corrin bears a striking resemblance to Diana, Princess of Wales in first-look images from the fourth series of The Crown, and Gillian Anderson is playing Margaret Thatcher.

The actress can be seen wearing a strapless floor-length purple gown with a gold pattern and matching scarf as she is accompanied by Josh O’Connor as the Prince Of Wales to an event where they are greeted by photographers.

Another picture shows her in a yellow skirt suit as she meets Camilla Parker-Bowles, played by Emerald Fennell.

Meanwhile, Gillian Anderson sports Margaret Thatcher’s famous helmet of hair as she waves to photographers on the steps of 10 Downing Street, dressed in a blue skirt and matching jacket and clutching a handbag, accompanied by Stephen Boxer as Thatcher’s husband Denis.

The fourth series of the hit Netflix show is set in the 1970s as Olivia Colman’s Queen and her family find themselves preoccupied with safeguarding the line of succession by securing an appropriate bride for Charles, who is still unmarried at 30.

It also documents tension between the monarch and Baroness Thatcher, as the Prime Minister leads the country into the Falklands War, generating conflict within the Commonwealth.

The fourth series also stars Helena Bonham Carter as Princess Margaret, Tobias Menzies as the Duke of Edinburgh, Erin Doherty as Princess Anne and Marion Bailey as the Queen Mother.

It has previously been announced that Imelda Staunton will replace Colman as the Queen for the final two series of the show, while Jonathan Pryce will play Philip, Elizabeth Debicki will play Diana and Lesley Manville will play Margaret.

The fourth series of The Crown will stream on Netflix from November 15.