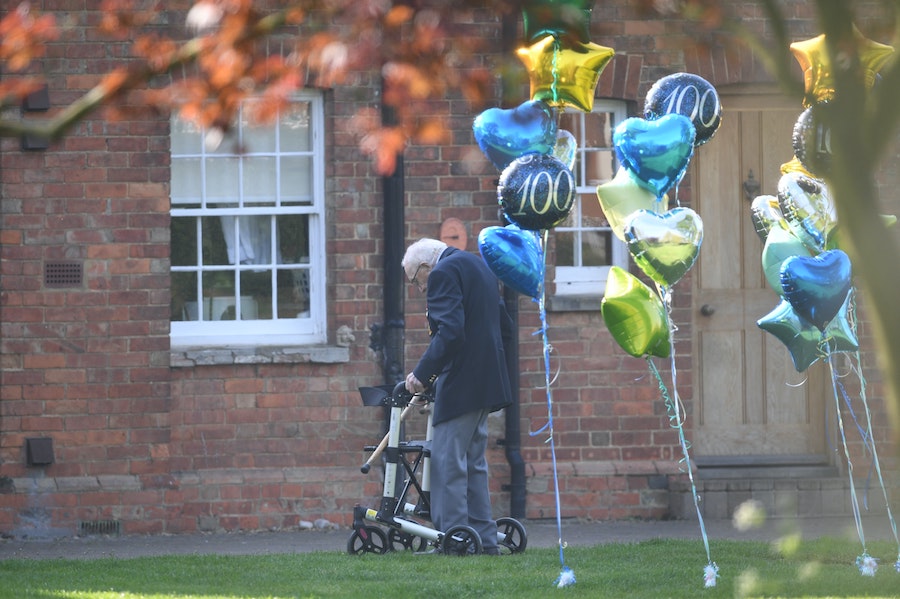 He did 100 laps of his garden in Bedfordshire, ending with a special guard of honour.

A 99-year-old war veteran who has won the hearts of the nation by fundraising for the NHS has achieved his goal of 100 laps of his garden – raising more than £12 million.

Captain Tom Moore completed the final four of the 25-metre laps at his Bedfordshire home on Thursday morning, with a special guard of honour by the 1st battalion of the Yorkshire Regiment.

Speaking at the finish line, he said he felt “fine” and that he was “surrounded by the right sort of people”.

Of the coronavirus pandemic, he told BBC Breakfast: “We will get through it in the end but it might take time, but at the end of the day we shall all be okay again… the sun will shine on you again and the clouds will go away.”

He planned to reach his target before his 100th birthday on April 30 to help those on the front line of the coronavirus crisis.

Cpt Moore said plans for his party have been affected by the virus, and he joked everyone would have to keep six metres away from him “because I must be something horrid”.

He added that the national outpouring of love and support for him was “a party enough for me”.

After smashing his first modest target of £1,000, Cpt Moore has now raised more than £12.3 million, saying medical staff “deserve everything we can give them”.

His daughter Hannah said he had become a “beacon of hope” during challenging times.

Speaking to ITV on Thursday morning, the captain said the public generosity had been “unbelievable”.

He added: “Our country and all our nations, we’re all so generous in all sorts of ways. But it’s for a super purpose.

“Nurses, doctors and all the back-up workers, they deserve everything we can give them.”

Cpt Moore, who lives with his family, was given a special mention in a press briefing on Wednesday by Health Secretary Matt Hancock, who described him as an “inspiration”.

The Ministry of Defence tweeted its congratulations as he finished his walk.

After being told he had become the largest single fundraiser for the JustGiving donation site, Cpt Moore said he would continue with his fundraising.

“We’ve fought so many battles and we’ve always won, and we’re going to win again,” he said.

“Please remember tomorrow is a good day and we will get through it in the end… I shall continue walking.”

There have been multiple calls for Cpt Moore to receive a knighthood for his charitable actions, and there is an online campaign for children to make him birthday cards.

His daughter said the local postmaster had already been “inundated” with messages ahead of his birthday.

Originally from Keighley in West Yorkshire, Cpt Moore trained as a civil engineer before enlisting in the Army for the Second World War, rising to captain and serving in India and Burma.

Donations to NHS Charities Together can still be made at www.justgiving.com/fundraising/tomswalkforthenhs