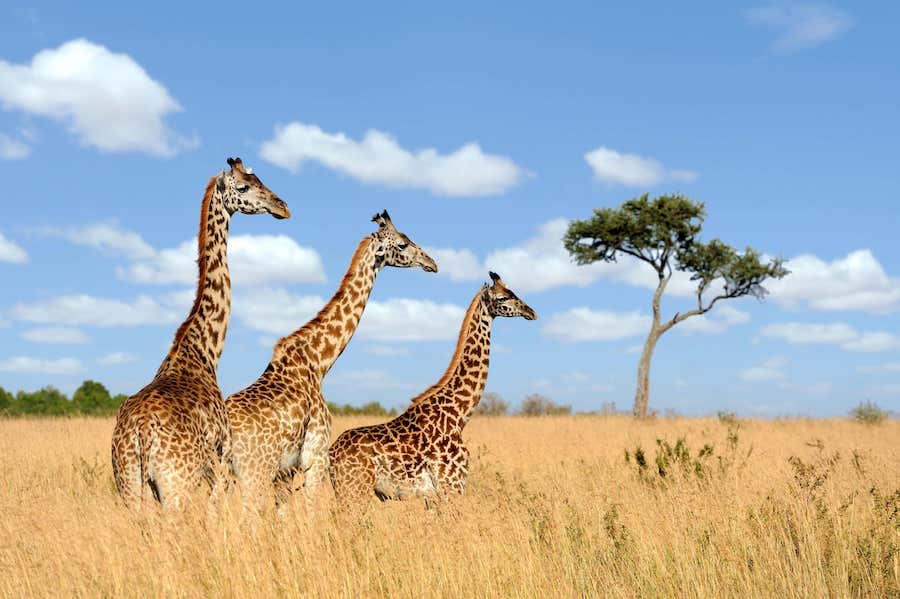 Mostly neck and leg, with a shout out to their unsettlingly long tongues, they seem to have been built from a grab bag of leftover body bits, yielding an animal somehow both elegant and comedic.

A recent study published in Science Advances identified a catalogue of giraffe-specific gene mutations required to support their bizarre form and said “the suite of adaptations associated with the extreme stature of the giraffe has long interested biologists and physiologists”.

To mark World Giraffe Day, here’s a few things you may not have known about this fascinating animal…

The blotchy, spotted pattern on a giraffe’s back and sides acts like a human fingerprint. Every individual is different, a boon for conservationists needing to identify different members of a herd.

Though giraffes can run as fast as 35 miles per hour, theirs is not typically an active lifestyle, and they need fewer than 30 minutes sleep each day. Sometimes they get by on much less, resting their heads on their rumps for a quick nap while one or more herd members stands guard.

An adult giraffe’s blood pressure is roughly twice that of an adult human – but that’s only near their hearts. In their heads, after the blood has been funnelled up six feet of neck, it’s about the same as a human’s. A giraffe’s circulatory system is a sight to behold.

4. They can do everything standing up

Have you ever seen a giraffe sitting down with its legs crossed? Giraffes can sleep, feed, mate and give birth all while standing tall, as when upright they’re impervious to all but the most apex savannah predators.

The only time giraffes have to lie down is during the first hour of life, as the calves work out how to balance on some of the animal kingdom’s spindliest-looking legs – and normally they stand within 30 minutes. In adulthood, those same limbs measure more than six feet in length, and can kick out hard enough to kill a lion.

No one has (yet) designed a giraffe-sized space shuttle, but the creatures have unwittingly contributed to the space race right here on Earth.

We’re not going to delve into the science (because we 100% don’t understand it), but a NASA physiologist realised in the 1980s that the problems faced by astronauts re-adjusting to Earth’s gravity were similar to those faced by giraffes after being born. Studies of giraffe blood vessels have since impacted spacesuit design.

6. They have the same number of neck bones as humans

They’re just really, really big. Humans and giraffes have seven neck vertebrae, but in giraffes they’re over 10 inches long. Large animals all round, giraffes also have feet the size of dinner plates, eyes the size of golf balls, and a heart that measures two feet across.

7. Males use their necks for fighting

Everyone knows giraffes use their height to forage from the branches of trees, but males also use their necks as weapons, whipping them round to clang into competing males like anatomical morning stars.

Charging into battle neck first is an obviously risky strategy, and there have been accounts of zig-zag-necked giraffes living out their lives at right angles after sustaining serious injuries.

The Roman dictator sailed a giraffe across the Med to keep as a pet in 46 BC. Described by onlookers as a “camelopard” – a hybrid of camel and leopard – we can only imagine what a sight it must have been lolloping through the streets of Ancient Rome.