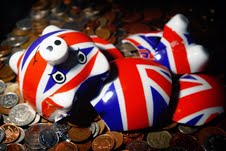 The typical British adult has just seven years of financial freedom during his or her lifetime, a study has found.

The “window of wealth” appears between the ages of 58 and 65, when people tend to have paid off their debts and their children have flown the nest and are supporting themselves, found the Skipton Building Society.
This is also often an age when people have some years of earning left before seeing their income reduce on retirement, the study said.

Three-quarters of the 1,000 people aged over 55 surveyed in the UK said they had little left-over cash between their 20s and 40s, with the money swallowed up by their mortgages, household bills and children. But four in 10 people surveyed anticipated their finances improving towards the end of their careers.

Skipton’s head of corporate communications Tracy Fletcher said: “As an adult, there will be financial commitments throughout your working life, but you can get to the point, albeit potentially quite brief, where things ease up and you finally have a little money to spend on yourself.

“The mid to late 50s can be the point where you stop forking out for your children’s education, cars, weddings and rent. If you are tied into a 25-year mortgage, this might also be the time when you’ve cleared the balance.”
The younger generation could struggle to copy those who were surveyed, against a backdrop of a tough current economic climate, with high unemployment, a pensions saving crisis and a housing market where many people struggle to get a foot on the ladder.

The study found that the average over-55 embarked on their first full-time job at 18, settled down with a partner by 24 and started a family two years later. A house was purchased at age 27 and the mortgage was finally cleared by the age of 53.
Respondents typically said that all their debts – including loans, credit cards and store cards – would be cleared by age 58, and they intended to retire at 65. Those questioned had managed to save £20,335 on average by the age of 50, but 61% said they wished they had saved more.

When asked how they intend to spend their “window of wealth”, six out of 10 over-55s said they plan to go on holiday, while 45% will give their house a makeover. A further three out of 10 would like to dine out more, while 22% will socialise with friends.

Have you found your window of wealth yet?