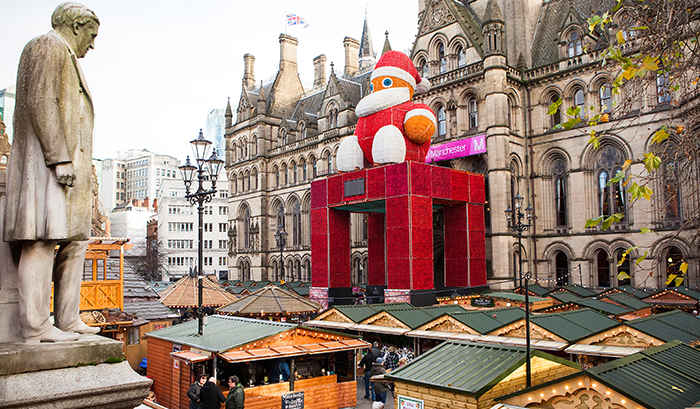 Northern Light of the UK Economy

From industrial revolution to economic evolution, a vibrant collision of creative culture and business innovation has firmly established Manchester as the leading light of the North.

Manchester: The northern light of the UK economy

In part one of our Manchester market update series, we take a look at how the birthplace of industry and innovation is continuing to attract both public and private investment, providing a prosperous platform for property investment.

Manchester is city famed for northern grit and radical ideas. With strong foundations in industry and manufacturing, Manchester is a vibrant and dynamic European hub boasting a rich history of scientific discovery, unrivalled musical genius and the rise of the world’s most beloved football team. As the proverb goes, “What Manchester does today, the rest of the world does tomorrow.”

This “capital in the North” is at the centre of the government’s plans to invest in a “Northern Powerhouse” and provide an economic counterpoint to London in the South. The proposed scheme would see GBP7 billion invested in science, transport and infrastructure over the next five years to increase economic connectivity across a collection of the UK’s great northern cities – Manchester, Liverpool, Leeds, Newcastle and Sheffield.

In his Autumn Statement on 3 December 2014, the Chancellor of the Exchequer, George Osborne, announced that a new dedicated sovereign wealth fund will be established to further invest in these northern cities. The fund will be backed by revenue from the shale gas sector ensuring “resources of the North are used to invest in the future of the North”. 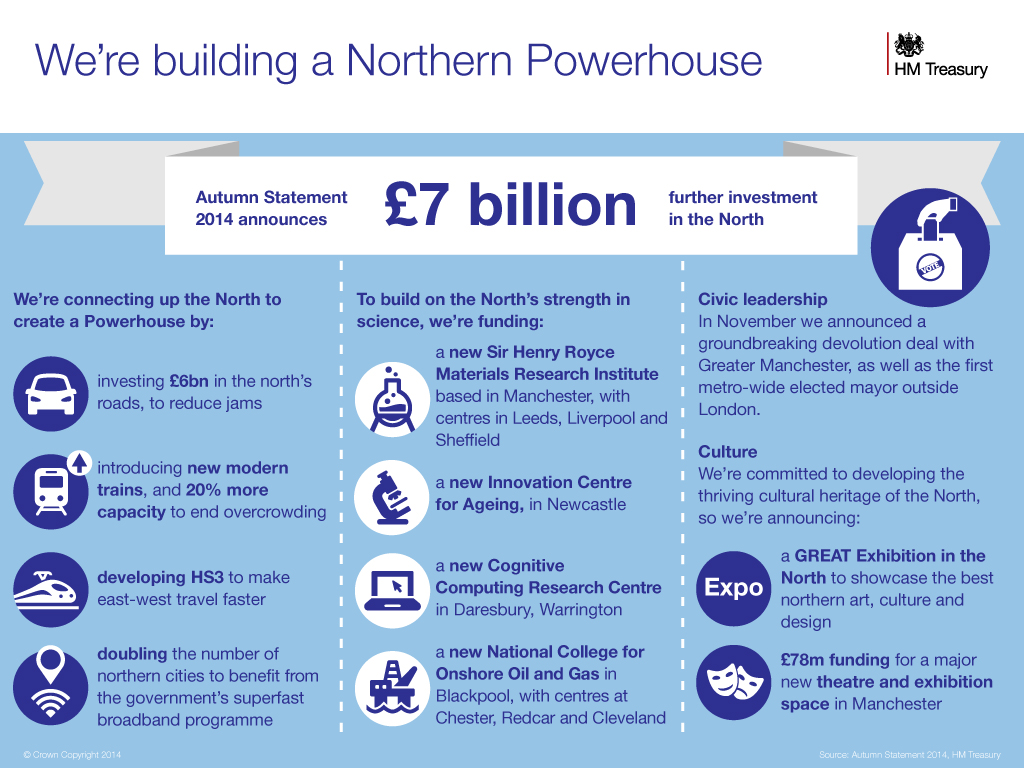 Much of this investment will be committed to improving transport infrastructure. The proposed High Speed 2 (HS2) rail line will drive Manchester to London journey times down to a highly convenient one hour and twenty minutes. Above and beyond that, discussions have begun for High Speed 3 (HS3) improving connections between Manchester and Leeds, as well as new franchises for Northern Rail and the Trans-Pennine Express. Investment will also be focused on high-value manufacturing research and science initiatives, with the initial centrepiece of this investment being the GBP250 million Sir Henry Royce Institute for Advanced Materials Research and Innovation that will be based in Manchester, with branches in Leeds, Liverpool and Sheffield.

The city is also known for its outstanding contribution to the creative industries. It is the birthplace of many of the world’s most successful and diverse bands, from pop groups such as the Bee Gees, Freddie and the Dreamers and Take That, through to indie classics such as The Smiths, The Buzzcocks, Joy Division and Oasis. In December 2014 it was announced that the city will see GBP78m invested into a new theatre providing a permanent home for the Manchester International Festival, named ‘The Factory’ in homage to Manchester’s legendary Factory Records music label of the “Madchester” era.

Forecasts put GVA up to some GBP67 billion by 2023, representing growth of an impressive 3% a year

The Greater Manchester region already contributes a Gross Value Add (GVA) of GBP51 billion to the nation annually, surpassing that of the entire northeast, West Yorkshire and Merseyside, and accounting for 40% of economic activity across the northwest, making Manchester stand out as a powerhouse in its own right within the north. Forecasts put GVA up to some GBP67 billion by 2023, representing growth of an impressive 3% a year.

At the foundation of this strong local economy lies the country’s largest business, financial and professional services sector outside of London, employing 278,000 people and generating GBP14.2 billion GVA a year. Greater Manchester’s thriving Life Sciences and Healthcare industries, major beneficiaries of the Northern Powerhouse investment, have over 185,000 employees contributing to 12% of the region’s GVA.

The region also boasts a robust manufacturing base, grown out of the city’s rich industrial history. Around 10% of Greater Manchester residents are employed in this sector. One of the more emerging business sectors is the creative, digital and new media industry. Boosted by the opening of MediaCityUK, the area has benefitted from focused investment and that serves to attract and develop new talent, leading to the generation of GBP3 billion GVA annually from over 8,000 businesses.

The excellent business environment has also been a magnet for new businesses in Manchester, with a 24% annual increase in startups to August 2014. This has all contributed to unemployment levels being down 11.3% since the GFC, with job creation expected to continue and forecasts alluding to 109,000 new jobs across all sectors by 2024. 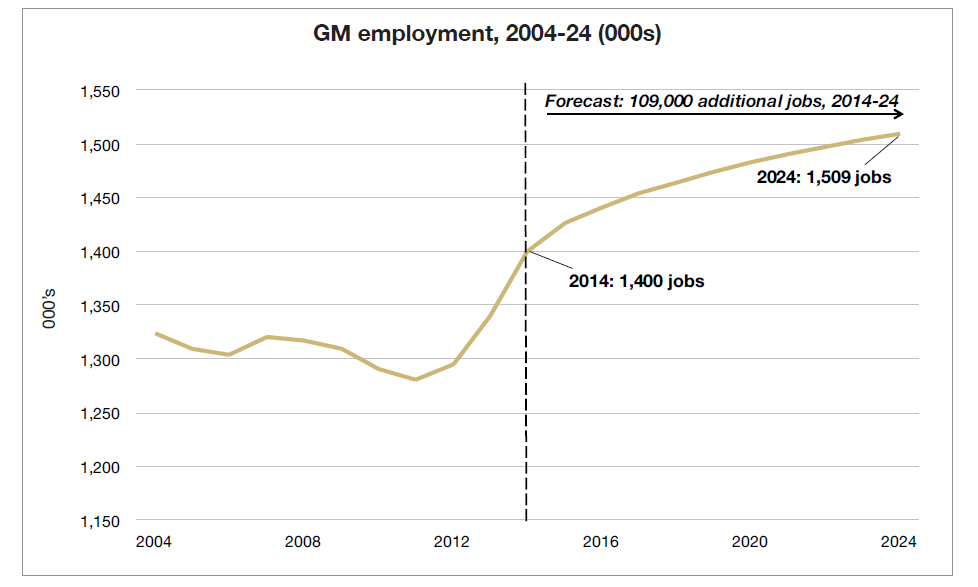 A HUB FOR INVESTMENT

In addition to public investment from the government, Manchester has attracted a wealth of commercial investment from across the world in recent years, and this looks set to continue well into the future as more and more investors see the potential in leveraging the city’s creative heritage to explore new frontiers in business and industry.

MediaCityUK has space for around 1,150 businesses, has created some 15,500 new employment opportunities since its opening and will add GBP255 million to the city’s economy per annum

The 200 acres of MediaCityUK along Salford Quays have played a key role in establishing Manchester as the UK’s leading media hub, and represents the first purpose built media community in the UK.

Chosen as the site for the new headquarters of both the BBC and ITV Granada, this thriving creative and digital hub has become a nexus for national and international media operations that has space for around 1,150 businesses, has created some 15,500 new employment opportunities since its opening and will add GBP255 million to the city’s economy per annum.

The MediaCityUK site has now been open for three years and has been wildly successful, quickly establishing itself as a firm first-choice destination for Manchester’s creative and digital community. Part of the project’s success is down to its holistic vision, which has led to the development of complementary business, retail, leisure, entertainment and residential space that shares a consistent vision.

Under the first partnership of its kind in the UK, the Corridor is a 600-acre city centre area that is home to a wealth of knowledge-focused businesses and organisations representing a wide range of industries. The Corridor employs 18% of the Manchester workforce and generates GBP2.8 billion – 22.5% of the city’s GVA. As the scheme continues to receive investment and grow, this is forecast to rise to GBP4.7 billion by 2020.

Manchester Airport is already Britain’s third busiest airport, with direct flights to 160 global destinations including Hong Kong, Dubai, Abu Dhabi, Singapore, and Washington. An GBP800 million investment by the Beijing Construction Engineering Group is set to expand Manchester Airport even further, following a model that has seen success in Barcelona and Frankfurt. Opening in 2016, new office, manufacturing and hotel facilities will be added and forecasts expect passenger numbers to double to some 36 million annually by 2030 as a result of this investment.

This is part of national government scheme to establish a number of “Enterprise Zones” across the country in a bid to encourage businesses to locate to and expand within specific areas through a range of business incentives. The programme will be supported for at least 25 -years, and will be a prime factor in creating new jobs and stimulating the local economy, as well as uplifting the local area (all business rate revenue collected under the scheme will be reinvested locally).

Positioned along the Oxford Road Corridor, the famous Manchester Science Parks campus has already played a key role in the development of Manchester’s business and knowledge economy. Now the site is set to receive an investment boost that will deliver some 3,750 new jobs over the next decade through the creation of a new hub that will bring together world-leading health, science and technology research and work, along with creating enough new office, laboratory and workshop space to double the size of the campus.

With the wealth of public and private investment into Manchester, it’s no surprise that we consider the city to be one of the UK’s prime property investment markets right now, and as such will soon be launching our very first investment in this exciting market. For investors interested in benefitting from what Manchester real estate has to offer, please contact your IP Global Consultant for further information.

We’re your ideal property partner from start to finish.

The process begins with the in-depth research and analysis that lets us source the world’s best real estate opportunities. Our consultancy service will then identify which of our first-rate projects are best suited to your portfolio, and our financial partner will help you find a mortgaging solution that perfectly fits your needs.