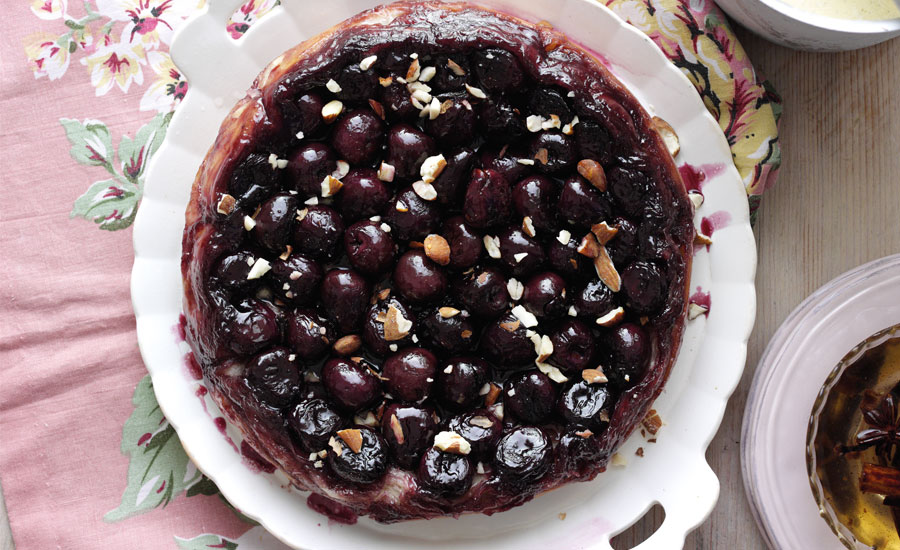 This is a twist on the original Apple Tart Tatin and you can really impress your guests by serving it with homemade ice cream!

For the tart tatin

For spiced syrup (Note: You will only need 3 tbsp of the syrup)

For the vanilla ice cream

1. Pour the double cream, milk into a large saucepan.

2. Split the vanilla pods lengthways and scrape the seeds out using the back of your knife and add to the pan with the milk/cream and the scraped pods.

3. On a medium heat, heat until nearly boiling point then turn off the heat and allow to infuse for a minimum of 30mins. The longer you leave the more the vanilla infuses.

4. When infused, reheat to a simmer.

5. In a mixing bowl whisk the egg yolks and sugar together until light and fluffy.

6. Slowly whisk the mixture infused cream into the bowl with the eggs and sugar. You must keep whisking otherwise you may end up with scramble eggs.

1. Scrape the seeds from the vanilla pod and place in a saucepan with the pod, the cinnamon stick, cloves, star anise, caster sugar and 250ml water. Bring to a boil, stirring to dissolve the sugar, then boil for 2–3minutes. Remove from the heat.

1. Preheat the oven to 220°C/Gas Mark 7. For this recipe you need a 20cm tart tatin dish or ovenproof frying pan. Roll out the pastry on a floured work surface to a 26cm diameter round, or 3cm bigger than your dish. Leave to rest until ready to assemble the tart.

2. Heat the butter and 3 tablespoons of the spiced syrup in the tart tatin dish over a Medium heat until golden brown and starting to form a caramel. Add the cherries and turn down heat and cook for a further 5 mins. Remove from the heat and allow to cool to room temp.

3. Loosely roll up the pastry around the rolling pin, then carefully unroll over the top of the tart. Tuck the pastry down the sides (inside the dish) with your fingers. Using a sharp knife make 3 small insertions to the middle of the pastry to allow the steam to escape the pastry. Bake for 30–35 minutes or until the pastry is crisp and golden. Remove from the oven and allow to settle for 10 minutes, then turn out the tart on to a plate (set the inverted plate on top of the dish and, holding the two firmly together, quickly flip over).

2. Place the almonds onto a baking tray and cook for 3-5mins until they start to release their scent.

3. Put into a pestle and mortar and crush into rough chunks. 4. Set aside until ready to plate. 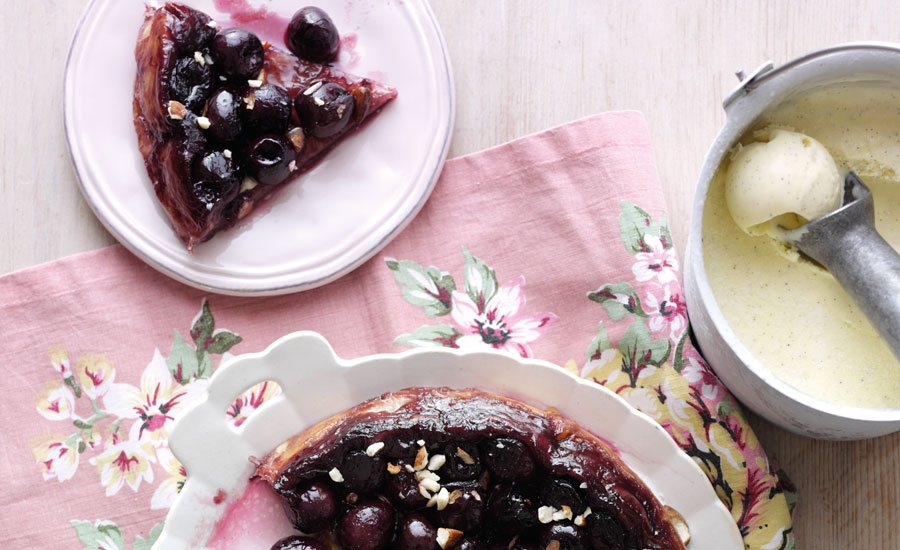 1. Slice the tart into sixths.

2. Dust with icing sugar, if using.

3. Add a good scoop of the ice cream and scatter over the almonds.

The syrup will keep for at least 6 months in an airtight jar in the fridge. I have some in the fridge at all times. Will be nice in tea so it has a chai latte flavour. Also if you reduced it further to a sticky syrup would be great to drizzle just on ice cream or even served with roasted fruit. Works well with crumbles too so they could even try it in a cherry crumble.