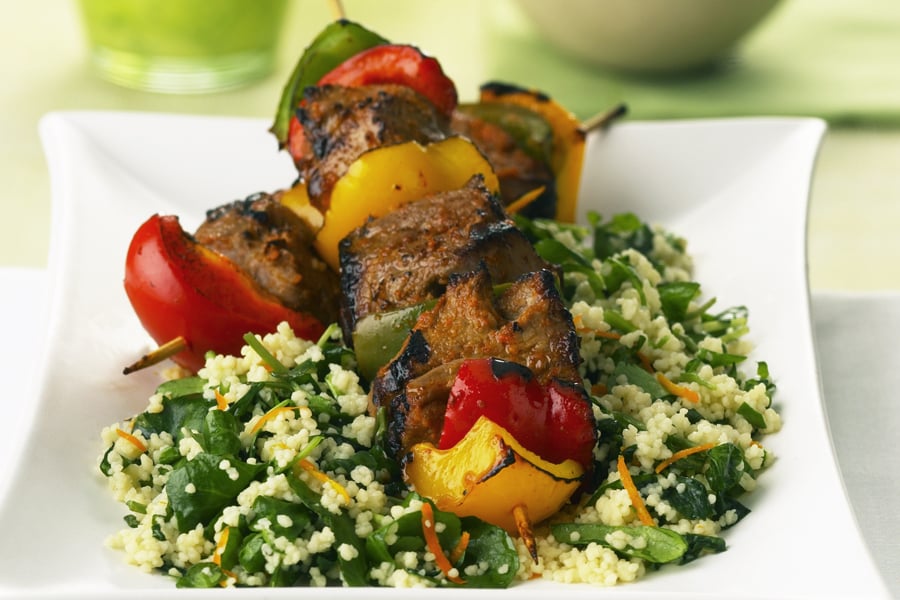 Looking for something different to rustle up on the BBQ this Bank Holiday weekend? This tasty lamb kebab recipe is perfect for the BBQ. So simple to make, it’s great for feeding a crowd, and the peppery addition of the watercress adds an extra dimension.

1 each red, green and yellow pepper, cored and deseeded

To serve: watercress and wedges of orange

Thickly slice the lamb and place in a bowl with the harissa paste and 1 tsp of the olive oil, toss well until the lamb is coated. Cover and leave to marinate in the fridge for 2-3 hours. Soak 6 bamboo skewers in water for at least 30 minutes.

Place the couscous in a large bowl, add the orange zest and juice, oil and 450ml/3/4pt of boiling water from the kettle. Season, then stir in the watercress. Cover the bowl with a plate and leave to soak for 15 mins until the liquid has been absorbed. Fluff up the grains with a fork.

Cut the pepper into wedges and toss in the remaining oil. Thread the pepper and marinated lamb onto the soaked skewers. Cook the kebabs over hot barbecue coals or under a hot grill for 10-15mins, turning occasionally until chargrilled on the outside, but still slightly pink on the inside. Serve the kebabs with the couscous and wedges of orange if liked.

Harissa spice paste goes into many North African – especially Tunisian – dishes. It is a blend of red chillies, garlic, and spices such as caraway seeds and ground coriander. It’s available from most large supermarkets where it’s sold with the dried spices. It tastes fantastic with these lamb kebabs, but if you prefer things a bit less spicy use a teaspoon each of ground cumin and coriander, a crushed clove of garlic and the zest and juice of 1 lemon.