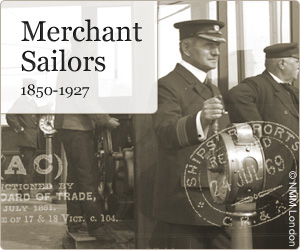 What happened to the drunken sailor?

More than a quarter of a million Naval examination records published online for the frst time, doumenting how disobedient seamen were foced to change their ways.

Alcohol and drug use curtailed by legislation introduced in 1850.

Captains of the Titanic, Cutty Sark and HMS Queen Mary included within the records.

Ancestry.co.uk today launches online the “Great Britain, Masters Certificates, 1850-1927” records – containing over a quarter of a million maritime examination records that led to the end of the drunken debauchery long associated with the Merchant Navy. Click the picture above to see a video of Actor & historian, Tony Robinson, discusses the launch from the National Maritime Museum in Greenwich.

These 280,000 records, released in partnership with The National Maritime Museum detail the seamen who passed examinations designed to test their sobriety, experience and general good conduct following a sharp increase in drunk and disorderly behaviour in the Merchant Navy at the start of the 19thcentury.

Upon passing, men were awarded a Masters Certificate as proof that they were fit for service. Certificates specified the recipient’s name, address, certificate number, birth date, birth place, port of issue, examination date and the previous ships on which they sailed.

It was the Mercantile Maritime Act of 1850 that led to the introduction of Masters Certificates by the British Board of Trade and all ranks, from mates to captains, were required to sit these examinations.

After the new law was introduced in 1850, drunken sailors were quickly forced to clean up their act. Crucially, legislation stated that seamen were no longer permitted to “sell bad drugs”, “work under the influence of alcohol” or “fraudulently alter” their Masters Certificates.

Some famous examples of Captains who managed to resist the draw of the strong stuff and successfully pass their examinations include:

Other famous names that appear in the records include Sir Arthur Rostron who received his Masters Certificate in 1895 and went on to save survivors of the Titanic in the RMS Carpathia and Captain Frank Arthur Worsley who commanded the HMS Endurance on an arctic expedition after passing his examinations in 1896.

Officially the UK’s favourite family history website Ancestry.co.uk contains more than one billion records in collections including the most comprehensive online set of England, Wales and Scotland Censuses from 1841 to 1911, the fully searchable England and Wales Birth, Marriage and Death Indexes, the World War One British Army Service and Pension records, UK Parish Records and the British Phone Books.

Ancestry.com Inc is the world’s largest online family history resource, with approximately 2 million paying subscribers.  More than 10 billion records have been added to the site in the past 15 years. Ancestry users have created more than 38 million family trees containing more than four billion profiles.

In addition to its flagship site www.ancestry.com, Ancestry.com offers several localised web sites, includingAncestry.co.uk which was launched in May 2002, designed to empower people to discover, preserve and share their family history.

For further stories and updates related to family history research, you can also followAncestry.co.uk on Facebook and Twitter

Were any of your ancestors in the Merchant Navy?