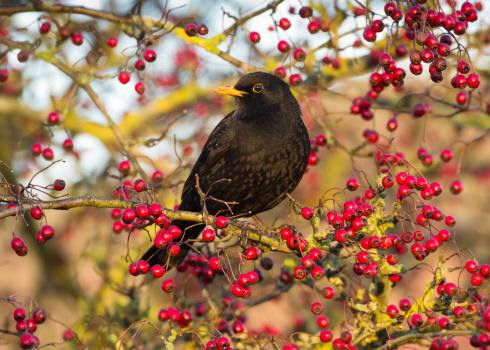 Give birds a boost of berries

As the colder weather sets in, Hannah Stephenson offers some tips on the best plants to grow for berries which will not only add colour to your garden but attract birds as well.

Gardeners should be continuing to refill their bird-feeders and baths during the cooler months, when the birds really need them, but it’s worth looking at some berried treasures to plant in borders as well.

Indeed, with some plants, such as pernettya and snowberry, the berries are the main attraction as their flowers are small and insignificant.

Don’t just think of red when you consider adding a shrub with berries to your garden. Their colours range from white to black and most colours in between. As they contain the reproductive part of the plant, berries are perfect for increasing your stock of plants.

The birds have a habit of helping with propagation, by spreading seeds all over the garden.

And there are quite a few trees which will provide them with food throughout the autumn and winter months.

The rowan tree, mountain ash and whitebeam, which all belong to the genus Sorbus, carry abundant crops of berries from autumn onwards and provide some fantastic autumn leaf colour as well.

The golden-berried rowan, Sorbus ‘Joseph Rock’, provides both colour for gardeners and food for blackbirds with its abundant berry crop.

For the best of both worlds, plant a Sorbus sargentiana, which has pinnate leaves which turn brilliant red in autumn, large sticky red buds in winter and huge clusters of white flowers, followed by bright red berries for the birds.

Another good garden stalwart that provides masses of fruit is the herringbone cotoneaster, with its dense tapestry of branches and small, glossy leaves also providing good nesting sites for small birds and homes to many of the insects on which they feed.

It’s a compact, deciduous species bearing pinkish white flowers followed by bright red berries and reaches a maximum height of around 1.5m (5ft) and is particularly suitable for training against a sunny wall.

If you prefer orange berries, go for the semi-evergreen C. simonsii, which grows a little taller and produces a new set of leaves in mid-autumn which may last until spring.

Of course, no berry-rich garden should be without at least two varieties of holly, as they need a male and a female to pollinate.

An abundant crop of scarlet or yellow autumn berries should appear as long as a male form of holly is planted near to every three to five female plants.

Often persisting through most of the winter, the fruits provide vital cold-weather food for many types of songbird, while deciduous forms with persistent bright red fruits include ‘Sparkleberry’ and Ilex verticillata ‘Winter Red’, with its dark green, toothed foliage.

Birds aren’t interested in all berries, which is just as well, because if you only plant their favourites, you may have little colour left by Christmas.

So plant some specimens which the birds will leave alone, such as Skimmia, Aucuba and the guelder rose (Viburnum opulus), which tend to be their least favourites.

Ivy berries, which usually ripen later in the winter when food is scarce, are extremely valuable to bids, while crab apples are also appreciated in winter.

When considering your food supply for the birds, remember that fruiting wall shrubs including pyracantha and flowering quince will need to be pruned after flowering each year to keep them close to the wall.

You may lose a few young berries, but the rest will ripen better and the shrub will look neater if it doesn’t outgrow its space.