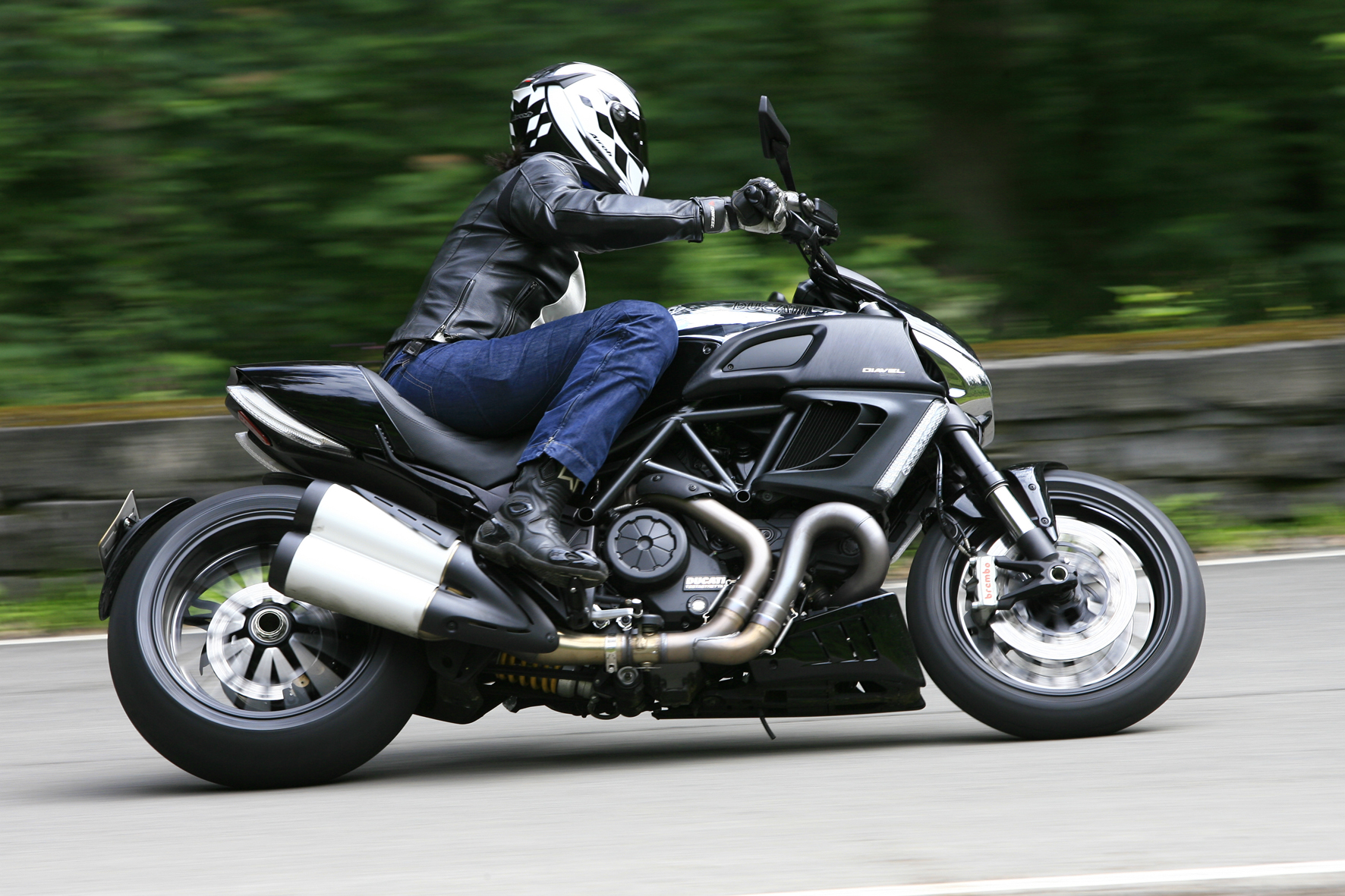 I’m over excited. Ducati’s Diavel Cromo has graced the pedestal in my imagination for quite some time, and now I’m about to ride one of the most stunning motorcycles around.

The Diavel (pronounced Dee-ah-vel and meaning ‘devil’ in local Borgo Panigale dialect) caused quite a stir when it was unveiled at EICMA in Milan in 2011. Ducati purists couldn’t quite get their head around a bike that has a 240mm rear tyre -and defies being slotted into any of the obvious genres. Is it a cruiser, a roadster, or a naked bike? We’ll call it a power cruiser for now and leave it at that. Ducati gave the superbike’s Testastretta Evoluzione engine more street sense for the Diavel’s use by boosting bottom end grunt, offering a smoother ride and reducing emissions and fuel consumption. Major service intervals were also increased to 15,000 miles. It may be slightly tamer than the 1198, but the Diavel Cromo is still a monster. The 1998cc L Twin can haul its 210 kg dry weight from 0-60 in just 2.6 seconds flat.

Although the Cromo version is new for 2012, it’s essentially the same as the original Diavel but with added chromium plated tank panels which shimmer against the shadow of black surrounding them. Horizontal seat stitching, a silver pin stripe running down the front mudguard, chrome detailing around the base of the headlight and classic Ducati logos give the bike a ‘vintage’ edge.

Having never ridden the ‘standard’ Diavel, I can’t wait to fire up the 1198cc lump and see just how 162HP and a buttock clenching 94lb.ft of torque feels in such a stylised chassis. But before I head off, I familiarise myself with the array of information available on the split level instrument display. The higher LCD shows speed, rpm, time, temperature and warning lights. The lower TFT display is incorporated into the 17 litre fuel tank and presents your riding mode, gear selection and DCT setting. Rather strangely, especially considering how technically advanced the Cromo appears to be, there is no fuel gauge on offer. On a 2012 street bike. Odd.

Ducati’s Ride-by-Wire system controls the engine’s torque and power electronically, so including 3 different mappings to suit different situations was a logical step. The Sportiest power delivery is the sharpest, unleashing all 162 stallions with such an instantaneous force that no matter how many times you crack the throttle open, the surge always feels like it’s caught you unaware. The Touring mode shares the same peak power figure, but like the 100HP Urban mode, its delivery is more progressive for extra rider friendliness. Ducati have also given you the option to personalise the settings using the buttons on the left handlebar. Riders can change the power set up within the modes and a change of colour on the dash reminds you that you’re using a revised setting. It takes a moment or two for it all to sink in, but once it does, swapping between the modes is a doddle.

Less can be said about the parking lock though as it remains temperamental the whole day. The low 770mm scooped seat is inviting and quite comfortable, as is the riding position on the whole. My right heel is balancing on the exhaust protector, but at least there is one – so my boots won’t melt. I cast an eye over the rest of the bike. It might not be everyone’s cup of tea but the bold lines and masculinity ticks all the right boxes for me. However, the tidy pillion seat cover bares a few scratches, caused by (I presume) the bottom of a ruck sack, so yes, the Diavel is rider friendly- it’s just not that luggage friendly. I don’t care though; I’ve got my house keys, credit card and phone in my pocket.

All I need now is an open road. I find one on the way to the Ardennes, it’s a wide open stretch and the Cromo’s fat rear end is eager to start spitting out asphalt. As I play around with the riding modes, the difference between them is instantly noticeable, especially from Touring to Sport. The latter is punchier and more dynamic and the Touring is just as impressive but it feels kinder in your hand. This is exactly what I had expected from the Diavel, a hit of adrenalin packed into an aggressively hunched form. The handling comes as no surprise either, but that isn’t necessarily a good thing. You only have to glance at the Cromo to know that it’s won’t dart around like some oversized fly. But the Diavel’s bulk is reported to be so cleverly distributed that even the wide rear end can’t stop it cornering like roadster. I find that hard to believe, and even though I’m super keen to be converted, the handling is so far proving to be exactly as I imagined – a tad laboured. The bike feels like it is subtly resisting tipping into bends and although it falls in line with a firm hand, that hint of defiance, no doubt instigated from the rear, takes the shine off the Diavel’s flickability. 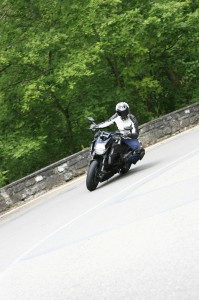 I begin to fantasise about slicing that 240 Pirelli Diablo Rosso II in half when it hits me; how you interpret the ride rather depends on how you view the bike. If it’s as a roadster, then I’d say the handling isn’t quite up to par. But call the Cromo a power cruiser and Ducati aren’t far off the money. The fully adjustable 50mm Marzocchi front forks, and Sachs rear unit – adjustable for compression and rebound damping, are on the stiff side as standard. Taking time out to tweak the settings may well loosen the steering and stop the bumps from jarring my kidneys, but today’s tight schedule just doesn’t account for that. I could say the packed time-table is the reason the throttle keeps finding its way to the stop, but I’d be lying. The Cromo is fast, so sensory, and so primeval – it is addictive. The rear brake on this particular model however is less impressive. I’m sure the ABS could help save my hide in an emergency, and the front anchors work just fine, in fact their stopping power is nothing short of eye popping, but the rear is so soft, I’m almost gouging a trench in the asphalt I’m treading on the lever that hard. In slow moving traffic, the Ducati’s weight and bulk is inoffensive and the handling is actually pretty impressive, but the clutch lever feels heavy, which surprises me considering the Cromo’s slipper clutch is supposed to have precisely the opposite effect.

So is the Ducati Diavel Cromo still occupying pride of place on my mental pedestal? The styling and engine alone earns it that right. The handling is less sporty than I’d hoped for, but it’s just what I had expected and the power on tap is utterly sublime. I wouldn’t be surprised if it can accelerate from 0-100km faster than an 1198. The gearbox is faultless, the riding position’s quite comfortable and it has the most delicious, snarling roar. . . .what’s not to love?