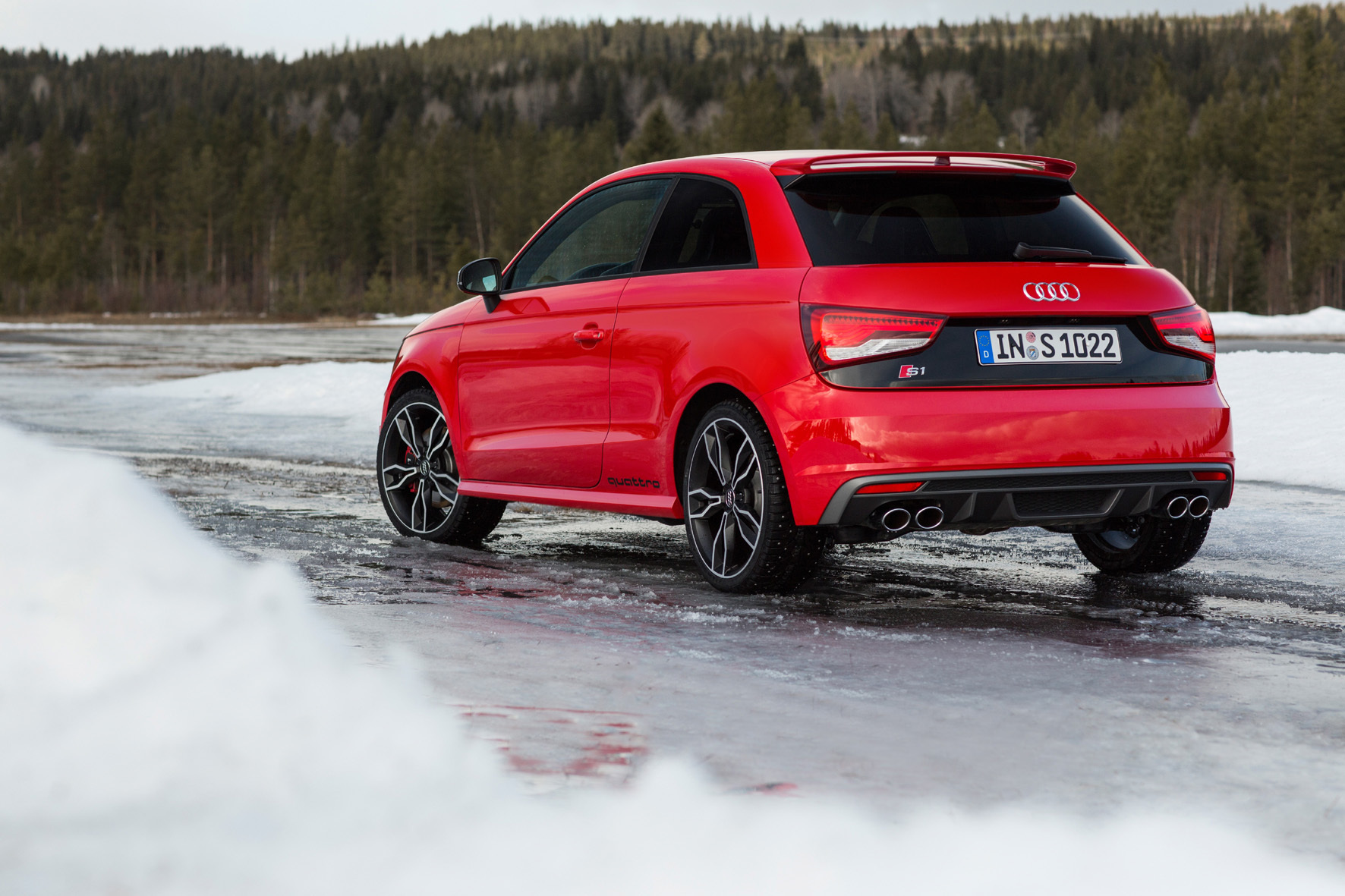 First there was the bonkers limited-edition A1 Quattro, and now there’s a more civilised and sanely-priced Audi S1 Quattro for the masses, says Matt Joy

More than you might think. Yes it’s still clearly an Audi A1, but as well as the pumped-up exterior (which can be pumped up still further if you pay a little extra) there are significant changes under the skin.

The most important is the new 2.0-litre turbocharged petrol engine, already seen in the S3 saloon and hatchback. There’s a six-speed manual gearbox to go with it plus the all-important four-wheel drive system. The rear suspension has also been swapped for a more sophisticated four-link arrangement for better handling.

The standard A1 is already one of Audi’s best-looking cars and the S1 goes a step further. The strong colour palette means you need to be sure of what you like, but it’s small and tough-looking which is an endearing combination. The optional Quattro styling package adds bigger wheels, a black rear panel and discreet Quattro badges on the flanks – we think this is a box that needs to be ticked.

The S1 is unquestionably a small car but you might be surprised what you can squeeze into it. Up front the slimline dashboard helps the feeling of space, while in the rear it is snug but you can insert adults in there without causing upset. The boot is good for the class too although there is slightly less space than the standard A1 because of the four-wheel drive hardware.

Oddment space is pretty good for a small car too, and obviously if you choose the five-door Sportback version over the three-door getting into the back is significantly easier.

Fun is clearly on the agenda with the S1 and it doesn’t disappoint. It has the Audi Drive Select system which allows you to change the power steering, throttle response and suspension between settings depending on your mood. In Efficient or Comfort modes the S1 is civilised and comfortable, the engine hinting at its potential but remaining relatively quiet.

Conversely when you switch it into Sport mode it all gets much more lively. There’s a pleasing pop and crackle from the exhaust, the steering has a little extra weight and the suspension firms up noticeably. In truth you’ll want to save that for fairly smooth roads, but the S1 is a complete hoot, feels indecently rapid and handles with real verve.

The three-door version starts at £24,900 while the five-door Sportback is £25,630. For that you get 17-inch alloy wheels, electronic damping as a part of the Drive Select system and ‘xenon plus’ headlights with LEDs at the rear. As always it’s the tempting options list that can push the price up.

Who would buy one?

Grown-ups wanting a small hot hatch with more quality than the norm will love the S1. There are rivals from more mainstream manufacturers that may come relatively close in terms of the fun factor, but the S1’s outright speed is hard to beat. Add to that the high quality cabin and the premium feel and the £25k price tag is certainly acceptable. Older folk who want something small and smart might be tempted too, although sensitive backsides may find the ride a little firm.