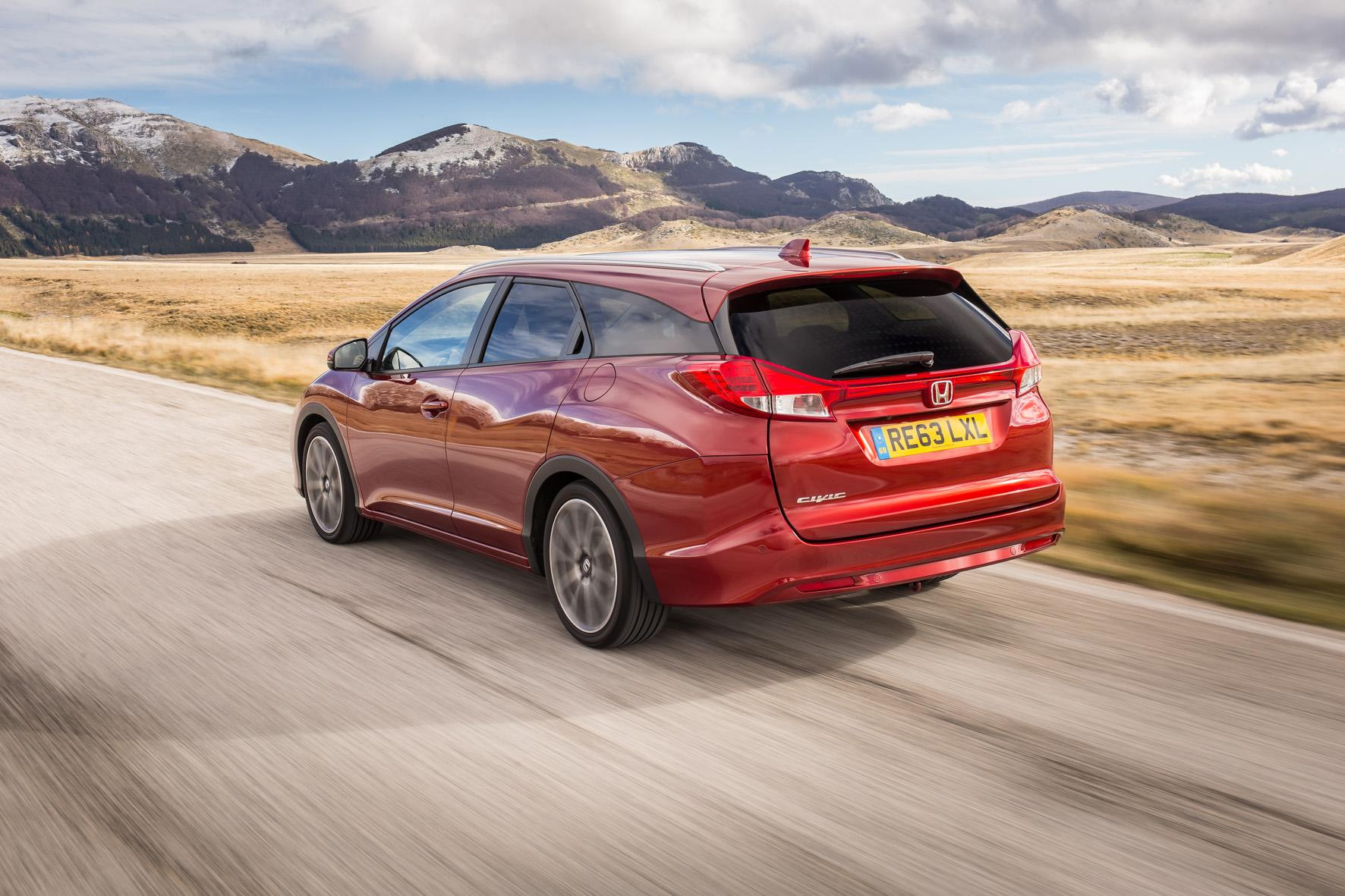 Some things never change, and plenty of people like it that way. The question I’m pondering is whether you can or cannot apply that reasoning to the new Honda Civic Tourer.

The Civic has a duality to its reputation that no other car can quite match. On one hand, you have the boy racer’s favourite, with screaming VTEC petrol engines and pin-sharp chassis dynamics. On the other hand, you have the safe, anonymous and imperiously reliable hatchback popular with the elderly.

But this new Civic Tourer aims to end both stigmas once and for all by putting young families directly in its sights. Honda says the compact estate category is growing again, and wants to ride the crest of the wave.

So I shall do my best to look at the car through a family man’s eyes.

The Tourer’s long, sleek profile is fantastic, although the surface detailing is upset slightly by the bodywork-flush glass around the boot area that sits incongruously next to the door windows, naturally slightly recessed and edged by visible rubber seals.

‘Will the family man really worry about that though?’ I ask myself. Maybe not.

He’ll definitely worry about boot space though, so I lift the impressively well-assisted tailgate – an easy job for one hand – and peer into space. Literally. There’s 624 litres of it, which is class leading and 19 litres ahead of the Golf estate.

Some 117 litres of that space is under the main boot floor in a separate, covered compartment. It’s an ingenious feature that saves cases, coats and bags from pinging about inside the boot like the plastic marbles in a game of Hungry Hippos.

The fuel tank has been shifted forward too, to underneath the front seats, to allow for maximum boot space. There are also plenty of cubby-holes and storage solutions in the cabin, including a big central storage bin that doubles as the location for the multiple media input ports and one of the two 12-volt power sockets that should let the kids charge a compatible device on the move.

Enough of the family man charade though: I want to drive the thing to see whether it’s more ‘young gun’ or ‘old chap’ – or neither.

Firstly, the ride is very good, with this SR model’s Adaptive Damper System in Normal mode doing a sterling job of quelling bounce but also absorbing the many bumps. The suspension is a bit loud at times, but the overall experience is great. Secondly, the wide, soft seats are comfier than my own sofa.

But thirdly, and frustratingly, the two digital screens are jarringly old-school in their look and function. Graphics seemingly aping the 1982 film Tron don’t help, and the way the collected buttons and digital sub-menus are designed and laid out simply isn’t user-friendly.

Another negative point is the steering, which on the open road is far too light and completely devoid of feel, or gives the impression thereof, to a degree I’ve almost never experienced before.

To give it its due, the system is comfortable in town, so the school run, multi-storey car parks and low-speed lane-changes in traffic are all dismissed with ease, but the utter lack of weight or feel can be disconcerting at speed, despite the steering system being very direct and quick to respond.

The petrol engine is smoother and quieter than the gutsier and more frugal diesel, so you’ll need to do the maths on whether the fuel economy and road tax savings – it’s free for the diesel – are enough to overcome the near-£1,200 price hike.

Almost everything a great everyday car needs is in place with the Civic Tourer. So if your needs fit its big-booted and comfortable-seated talents and if the dated technology doesn’t bother you, feel blissfully free to enjoy a car that will handle everything you throw at it, and probably never, ever break down.

Now that’s a car I could put my family in.

FACTS AT A GLANCE: