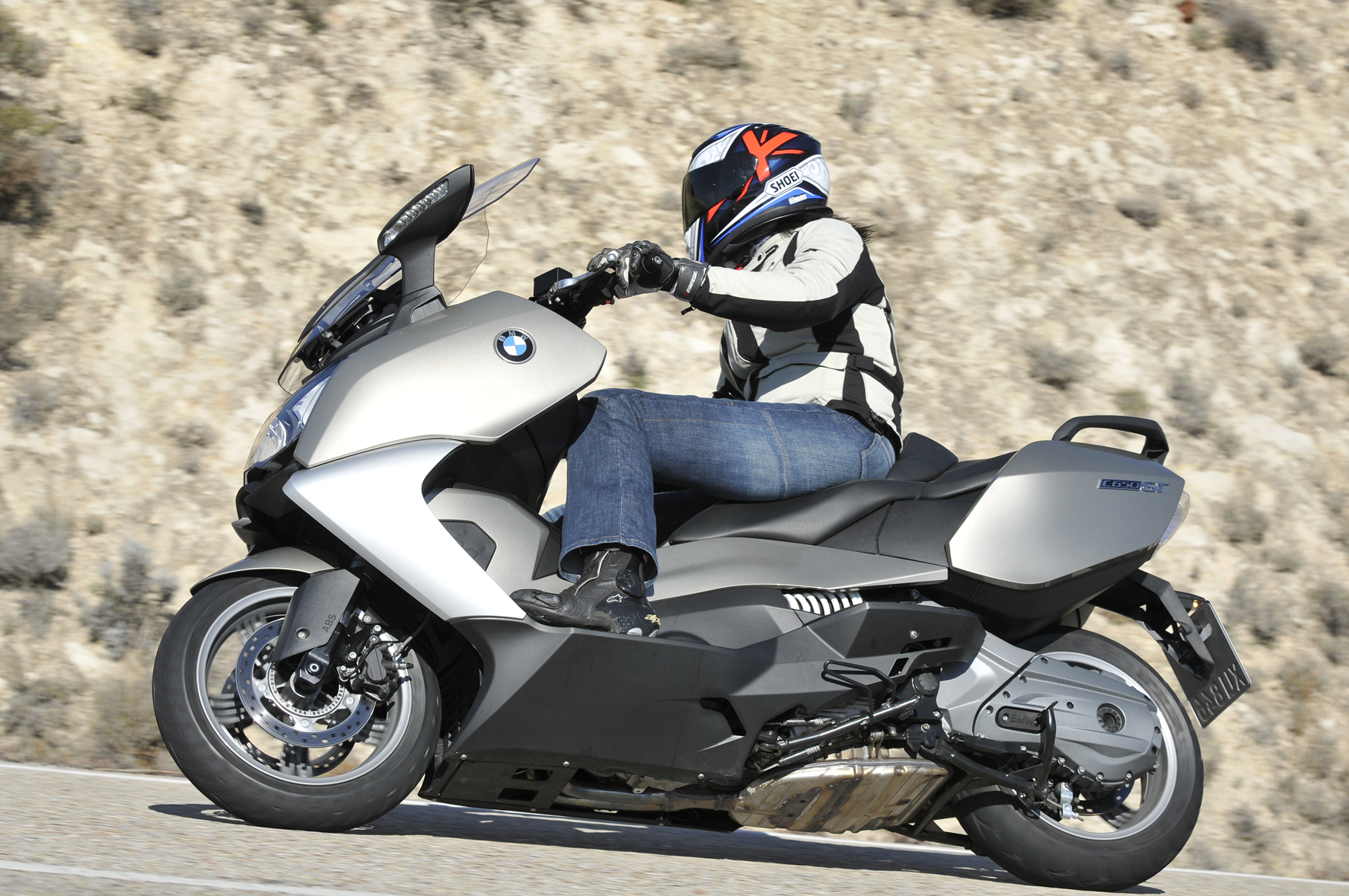 BMW’s first ever maxi scooters share the same basic formula, but compared to the C 600 Sport, the BMW 650 GT is slightly longer (by 63mm) and wider (by 39mm) and it pays more attention to rider comfort and storage capacity.

It’s a mighty fine specimen and had I not been privy to both models, I would most certainly be tempted, but I prefer the riding style and punchier power delivery of the C 600 Sport.

That said, for all you commuters out there, the GT is definitely worth a test ride. Straddling the 780mm high seat- 30mm lower than the Sport’s, the GT feels instantly roomier than its non-identical twin. The ergonomics have been reshaped to provide a more relaxed riding stance and it’s one that suits my basketball player frame. The handlebars feel wider and higher and there’s no danger of any knuckle-scraping-patella action. The seat is also softer and far more comfortable than the Sport’s and I suspect you would have one very happy passenger if the GT ended up as your weapon of choice, whether you plan to attack the rush hour, slice up twisties or assault a few highways.

The two step saddle is bridged by the rider’s back rest, which can be adjusted, and where the Sport has flick out footpegs for the pillion, the GT’s footboards simply extend towards the rear of the scooter. As with most things BMW produce these days, both of these new models have been very well considered.

The colour co-ordinated panels flanking either side of the back end look like you’ve added a pair of smart panniers to your scooter and although you can increase the storage capacity by adding a top box, the space available inside as standard is impressive -60 litres in the tail alone. As with the Sport, the GT has two front cubby holes – the left one being lockable, and you can fit two full faced helmets under the seat and more. It has to be one of the most practical scooters currently available.

Where I’d forgotten to raise the windscreen for the motorway stint on the Sport and had to endure a face full of windblast, the GT’s taller screen can be adjusted electrically by 10cm with the simple press of a button. It’s easy, effective and appreciated. Again, I’m not the ideal size to test such things, but if I slouch like I’m sitting in a ten year old bean bag, and pretend that all the bones in my body have been removed by – a bone remover, I can fold myself into the perfect height to take advantage of the screen’s highest setting. I don’t normally suffer from size envy, but it does feel good to feel so protected.

In fact the GT is the ideal commuter. It suits licking along at a happy pace and then weaves effortlessly through dense traffic when motorcyclists have to start feathering clutches and dancing through gearboxes. Dial in a request for a dynamic ride and the GT’s extra weight becomes a little more obvious. It’s not exceptionally heavy at 261kg ready to ride, but that is 12kg more than the Sport, so it doesn’t quite share the same athletic take on corners or accelerate with as much gusto. 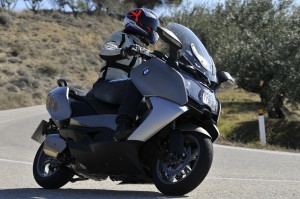 The weight still feels evenly distributed though – as the GT has a fatter bottom and more solidity to the front end, but the handling feels steady, rather than lively and it needs a gentle nudge to get it banked over to the same degree as the lighter scoot.

At dinner later that evening, I ask the engine designer if they had considered giving the GT’s twin cylinders a few extra ponies. It certainly wouldn’t go amiss and it would raise its performance level to match the Sports scooter. Apparently, BMW didn’t consider this an option, but they had toyed with the idea of reducing the Sport’s 60pk instead. I’m so glad they didn’t.

The instrument display on each scooter varies slightly in design, but as with almost everything else, they are otherwise the same and both models showed comparable fuel consumption figures of 7.2 litres per 100km to around 5.2 litres per 100 km depending on the ride. The wealth of information displayed on the dash ( of both scooters) is useful and intelligent and includes fuel and oil levels, date and time, actual and average fuel consumption, 3 trip counters, average and actual speed and of course, as with the Sport, there is the all singing and dancing optional Highline package which includes heated seats and day time riding lights. The heated grips and seats have three settings, including one that switches off when the outside temperature increases. Clever stuff.

These scooters are a first for BMW and there are more variations in the pipeline. Whether they opt for smaller capacity engines or alternative power sources or both, the C 600 Sport and C 650 GT should already attract a new customer to the German brand.