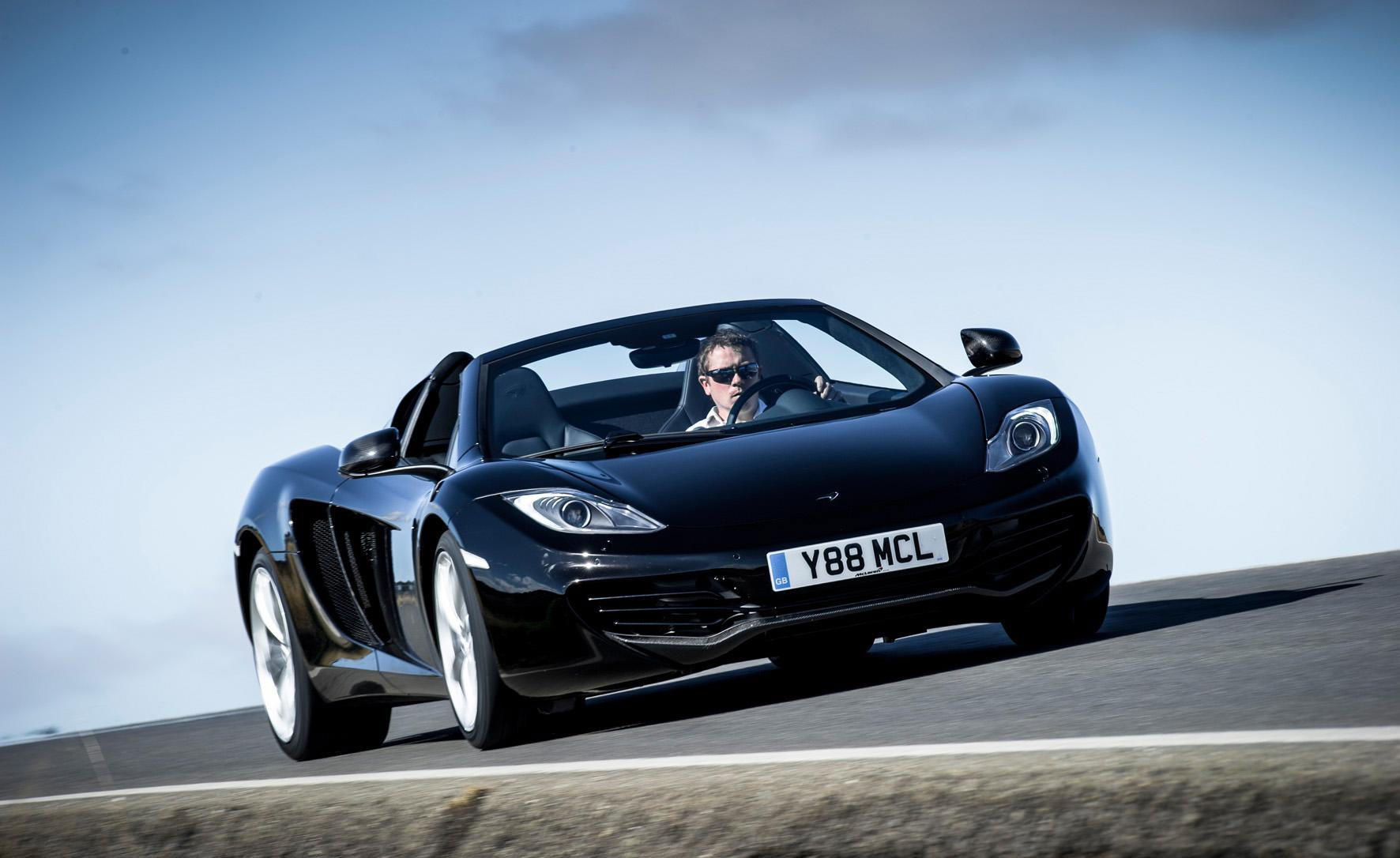 This year’s Paris motorshow was stolen by the Brits. The home team might have been out in force but it was McLaren’s P1, the first glimpse of its flagship supercar, that drew the biggest crowds.

There was, however, another new car sharing the stand – the MP4-12C Spider. An obvious second act to follow the coupe version, the Spider swooped in with the promise of the same blockbusting performance and handling, but added fresh air. But the Spider doesn’t have any of the compromises you normally get when switching from coupe to drop-top. The super-strong and light carbon ‘Mono Cell’ chassis was designed from the outset to be turned into a drop top, so creating the Spider required no chassis strengthening at all.

That meant unchanged suspension too, which is almost unheard of, and the weight increase is negligible – just 40 kg accounting for the roof mechanism and a different exhaust.

In fact when getting your first glimpse of the Spider it’s actually quite easy to mistake it for the coupe. The Spider has a two-piece composite roof that will fold in less than 17 seconds and at speeds up to 19 mph.

Remarkably it actually offers more luggage space than the coupe, thanks to a pair of roll-up bags that stow beneath the tonneau cover when the roof is up. There’s also a heated rear window that acts as a wind deflector when the roof is down, but can also be lowered with the roof up to allow the engine sound into the car.

In a way that small detail tells you a lot about the Spider experience – it is a car prepared and able to suit any circumstances. Assuming you approach the car with the roof up, you squeeze a discreet rubber button to open the door as it glides upwards into position.

Slide yourself into the slim but comfortable seats and you feel at the centre of the action. The windscreen drops down low to give a superb view out while the wheel and the instruments sit proud of the dashboard top, giving an uncluttered driving environment. Fire it up and with everything turned down to its friendliest settings, the Spider demands very little of you indeed.

Press the ‘D’ button to engage the gearbox and a slight squeeze of the accelerator releases the auto handbrake and you’re away.

You have the same active dynamics panel controlling handling and powertrain so you can tailor the car to the circumstances. With everything in ‘normal’ there’s nothing to tell you you’re in the Spider. It’s just as fast, as compliant, as quiet and as accommodating as the coupe.

Drop the roof and it changes completely of course: wind is kept well in check below silly speeds and of course that super-strong carbon structure means not one hint of shake or wobble over bumps. This is how all convertibles would be in an ideal world.

Don’t waste a single opportunity to turn everything up though. The intermediate ‘sport’ mode offers an excellent balance for fast road driving, leaning off the electronic stability control (ESC) a little bit to allow some movement in the car while the extra noise and sharper responses from the engine are welcome.

You can use ‘track’ mode on the road of course, but then you are in control of all 616 bhp (an upgraded output over 2012 model year).

Such is the linearity of the twin-turbo V8’s delivery that it is deceptively fast. An extended blast through first, second and third gears feels mighty fast but the speedometer tells an even more remarkable story: it will hit 124 mph from rest in just nine seconds with the grippier Corsa tyre option.

It’s best experienced with the rear window down as you get all the noise, resonating around the roof and no wind intrusion whatsoever. Despite being turbocharged it does its best work with a few thousand revs on the dial, but the performance is savage in bald stats yet silken in delivery.

Even so it is arguably the ride and handling combination that is more impressive. The active roll control system is tech-heavy but all you need to know is that it allows the Spider to skim over bumps in a way that no performance car has ever done, yet it doesn’t compromise an inch in the way it grips and resists roll.

The Handling switch allows adjustment of the roll stiffness, but even with it turned up to ‘track’ mode it’s firm not harsh. The test drive included track time as well as a mixture of Spanish roads, andits ability to deal with such a wide variety of surfaces was remarkable.

If anything, the optional Corsa tyre’s extra grip isn’t necessary: on the road the grip levels are stratospheric and on track it’s a pleasure to flirt with the edge of adhesion and feel the Spider move around. Even driven like this, it responds beautifully, never feeling twitchy or a handful.

The philosophy behind the MP4-12C Spider is clear to see, and its adaptability and immense competence is remarkable.

The Spider is essentially the class swot: so good at everything you want to dislike it, but you can’t help but have huge respect for its flawless execution.