Apparently its not just humans who have problems being a little overweight some of our best friends are having the same challenges as well according to the PDSA (Peoples Dispensary for Sick Animals) with 1 in 3 pets dogs and 1 in 4 pet cats now classified as obese!

More than 18 million pets are at risk of early death because of poor diets which often include takeaways, crisps and cakes, according to a report.

Unprecedented numbers of dogs, cats and rabbits are fed “potentially life-threatening” meals which can lead to arthritis, diabetes and heart disease, veterinary charity PDSA has found.

The “deadly diets” have left animals unable to walk, play or even clean themselves, it said.

While an estimated 18.5 million pets are fed inappropriate diets, some 13.5 million animals are “treated” to fatty or sugary treats and junk food, the PDSA Animal Wellbeing (PAW) Report revealed.

Elaine Pendlebury, PDSA senior veterinary surgeon, said: “Pet obesity poses not only major health risks such as diabetes, arthritis and heart disease, but sadly also means daily misery for millions of pets who are feeling the strain from carrying too much weight.

“Vet practices across the UK see the consequences of pet obesity every single day such as obese dogs unable to enjoy regular walks due to exhaustion, fat cats that can’t jump or play, and rabbits so hopelessly overweight they can’t clean themselves properly.

“And then there are other obesity-related health conditions which can mean pets don’t lead the long and happy lives they should.”

Dr Alex German, an animal obesity specialist at the University of Liverpool’s veterinary school, said pet obesity was “entirely preventable” and could be reversed with “veterinary supervision and owner dedication”.

PDSA has now launched its annual animal slimming competition to find Britain’s fattest pets and help them get fit. Owners can enter their pets at www.pdsa.org.uk/petfitclub. Entries close on Friday April 12.

YouGov surveyed nearly 4,000 dog, cat and rabbit owners; 466 vets and vet nurses; and 553 children for the report this month.

The PDSA runs a fat camp for pets to help them loose weight called the PDSA Pet Fit Club which has been entered by Cats Dogs and Rabbits. Last Year 17 of the pets underwent a strict regime of dieting and exercise and collectively they managed to loose and incredible 86 kilos or 13 stone 7 pounds the equivalant of a fully grown man!

The winner of the competition was a Cavalier King Charles Spainiel called Jack who lost 14 pounds. His owner said he is now called Jumping Jack as he jumps and barks all the time now whereas before he lost the weight his nickname was Jumbo Jack! 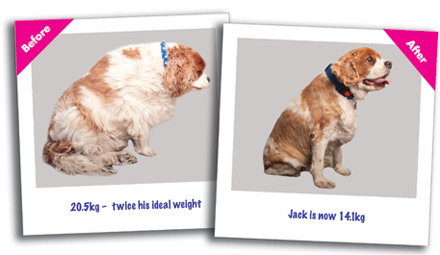 PDSA is the UK’s leading veterinary charity, caring for more than 490,000 pet patients belonging to people in need.  The PDSA website for a variety of information about caring for your pet by clicking here ←

Would you consider a Fat Camp for your overweight pet?

Pet scams are on the rise: How to avoid losing money to fake puppy ads

Avoid contact with pet cat or dog if you have Covid-19, say experts