This site uses cookiesClick here to remove this messageMore information
Welcome to Silversurfers - features, offers, news & social forums for the over 50s...
Silversurfers
Log In Join
Silversurfers
Menu
Articles
Articles Members BlogsA year in the life of a GOSH kid …. 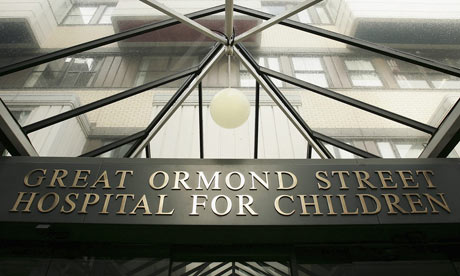 We had moved down from Edinburgh to Suffolk as my father had been invalided out of the Navy with lung damage. My mother had been stoned in the streets of Edinburgh for conceiving me out of wedlock and went into hiding at my grandmother’s apartment in Edinburgh. I was born in September of 1944 with Poland’s Syndrome. Eighteen months later my four year old cousin who had come with his mother to visit mine at my grandma’s apartment took a dislike to my deformity and whilst my mother was hanging out her washing three storeys below in the communal garden he opened the window and pushed me out. My mother heard my scream and saw me falling head first towards her. Quick thinking on her part saved my life as she picked up the washing basket and caught me before I hit the ground. Unfortunately I landed head first and consequently my soft skull was pushed back squashing my brain. I was alive but only just. I was taken to the Edinburgh Infirmary. On arrival I was diagnosed with a terminal condition and a priest was call to christen me and give me the last rites. The Hospital team sprung into action. Procedures learnt from treating war casualties were applied and within 48 hours I was responding. Two months later I was discharged but I had learning difficulties along with a hearing problem that consisted of high pitched noises that would send me into non stop crying fits, however the peace and quiet and clean air of the Suffolk countryside, that seemed not only good for my father, was for me too, but my mother hated Suffolk and suffered with severe depression.

Late in 1949, I was sent to primary school but the children didn’t like me. I was an outsider who spoke differently to them plus they had never seen someone who was suffering from Poland’s syndrome and most of the boys took an instant dislike to me and the girls all wanted to mother me which made matters worse. One weekend in my first term at school two boys came up from the village to my home just outside of the village. They taunted me then began to hit me. Not being a strong lad I was soon knocked to the ground where they kicked me senseless. Our next door neighbour “Bobo” as I had christened him saw what was happening and came running to help me and the boys ran off. Bobo picked me up and took me home to where my mother went hysterical. The “devils child” had struck again she cried. Bobo ignored her screaming and sent his wife to the farm half a mile away to ring for the doctor. The doctor duly arrived, patched me up then took me to Ipswich general hospital in his car. I was diagnosed with a torn ear and eye lid, a broken nose, jaw bone and cheek bone. My right hand which was affected by Poland’s had been stomped on breaking all five digits at the knuckle. They also found that my face, nose and ears had been smeared on dog excrement. I was in Ipswich hospital for a week then transferred to Great Ormond Street Hospital where I stayed for twelve weeks. I was then sent home to recover, to return 5 months later for reviews and perhaps follow up operations.

On arriving home, I did not recognise my parents, nor had I any memory of the last 5 years which irritated my mother who began to look at me as ‘Satan’s child’ yet again, and at the least provocation would slap me across the face, especially if I was stood next to the large Belfast pot sink in the kitchen, as my head would hit it with the force of my mother’s smack and god help me if I tried to protect myself. This drove her into fits of screaming and blows would rain down on me. Sometimes I was put to bed for days on end with mother telling the school and neighbours I had had a relapse, but really it was to hide the fact she had beaten her sick child so much he was covered in bruises.

I began to get heavy nose bleeds and could not chew my food, along with severe headaches. My vision would blur with bright flashing lights and lots of wavy lines and I would walk into things. When this happened my mother would hit me for walking into furniture but I never felt the blows as I seemed to be in a twilight world. I went back to Great Ormond Street Hospital without ever going back to school in those horrible 5 months. The hospital found that I had picked up a bug from the dog excrement which had eaten the soft cartilidge of my nose and was working on the front lobes in my forehead, hence the violent headaches and blurred vision. Over the weeks that followed and the operations the headaches disappeared as did the blurring in my eyes and the noise that had been constant in my head also disappeared. My jaw had to be broken and realigned so that I could chew my food. It was soon time to return home to convalesce.  I didn’t want to go home as fear welled up in me of the memories of my mother standing over me hitting me time and time again, the hurt, the pain, became so vivid. I ran and hid and it took a whole afternoon for them to find me and I was hysterical when they did. The staff were not angry, in fact quite the opposite. I was taken to an office deep inside the hospital building. Here I met a doctor and a nurse who spoke to me and found out why I didn’t want to go home. I remember having ice cream and mixed fruit with them. I was not sent home but sent to a hospital on the outskirts of London where I met the nurse from the doctor’s office who I  nicknamed “Bunny”. She became my surrogate mother/big sister and would spend time talking to me. I spent about four months in the convalescent hospital and just after my 6th birthday I was returned to Great Ormond Street Hospital for more surgery. The morning of the return journey Bunny was there packing all my bits and pieces into a cloth bag. There was a half finished wicker basket, needle work, knitting and lots of personal items. The ambulance arrived and the driver was a lady who allowed me to ring the ambulance bell. Bunny told me to hurry up as we were going home to Great Ormond Street.  She made herself comfortable alongside me and the ambulance set off.

We arrived at Great Ormond Street Hospital in what seemed to be a blink of an eye ready for another adventure.

But that is another story ….

Since retiring full time and having trotted round the world in our younger and healthier times done Europe before the madness of the euro. We now travel around this beautiful country called GREAT Britain. In 2010 we came down from Northumberland to Devon having spent all summer touring Scotland we spent the winter there looking after the Camping and Caravanning club site at Bellingham. We enjoy our life style especially since I was diagnosed as having Asbestosis in both lungs in 2002 and was given 5 years before I would have to succumb to using oxygen just to breath. We avoid Towns and Cities as much as possible as the fumes make me very ill for days. The two big clubs have camp sites out in the country so that’s where you will find us.I have been into computers ever since I bought Clive Sinclair’s ZX 81 in 1981. I spend a lot of time writing blogs and enjoy writing to friends around the world. But not having a land line used to have its draw backs but in this age of technology mobile internet is now available to the travelling man. With my mobile phones contract coming to an end I looked at all the options that phone companies had to offer. My new contract mobile phone is a Samsung Galaxy 2 an all singing dancing Android, the telephone side of this Android is only one tenth of its capabilities. Its main function for me is its internet hosting. I can run two laptops simultaneously down load itunes to my ipod and keep up with twitter, face book, and emails with the greatest of ease. I would recommend an Android to all caravanners and motor homers.

Latest posts by opelaccent (see all)