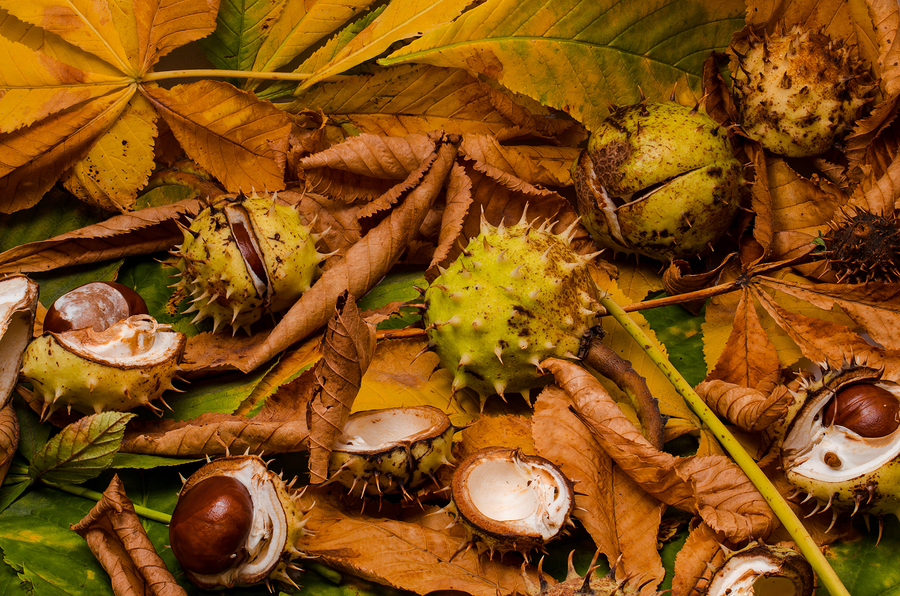 This article was written by Arthur Crowhurst in 1996. Arthur died in 2004 aged 96 and his family have kindly given their permission to publish this article in memory of his World War I war effort.

Having spent the whole of my 80 odd years living in the rural countryside of Surrey I have, from a very early age, been quite familiar with both acorns and conkers.

Acorns, I learned, were fed to pigs and of course at school I soon discovered the game of ‘conkers’ which gave immense pleasure to us boys in the playground.

For the benefit of the uninitiated, the hardest or toughest ‘conker’ was selected and a hole bored through with the aid of a skewer from the kitchen. It was then threaded on to a string approximately half a metre in length and you were ready to do battle with your opponent – the challenger having first strike.

As a pupil at Tandridge Village School from 1914 to 1920 I was introduced to this popular game at an early age. Imagine my surprise when we were told by the teacher one autumn day that instead of lessons, one day each week we would go out into the neighbouring woods collecting conkers and acorns.

Cardboard boxes, satchels and pockets were filled and brought back to school where they were transferred to a large sack and weighed. It was only on completion that we were told that our conkers were to be used for real battles – making munitions to fight the war.

I accepted this explanation at the time but, later, when I saw conkers being collected by schoolboys on Godstone Green, I began to puzzle just how the conker could have contributed to the war effort in my early school days.

It was not until last summer (1996), nearly 80 years later, whilst staying with relatives in Dorset that I saw the headline of an article in the Dorset Year Book 1996 “Acorns Urgently Needed!” by John England.

I knew instinctively that this was going to provide me with the answer I had sought for so long.

John England, the author, had been approached by a Dorset schoolteacher who was seeking information for a project which she was preparing on the First World War. It seems that at one point she came upon several entries in the School Log Books giving reports of the children’s expeditions into the countryside to collect conkers and acorns which were sent to the local munitions works.

The author, having at one time been employed at the Royal Navy cordite factory near Poole, was able to explain: acetone was an essential ingredient used in the manufacture of cordite for explosives and was in short supply world-wide at that time. It was not surprising that alternative, locally available materials had to be found.

Horse-chestnuts, acorns and artichokes were tested and, as vast quantities were needed, an advertisement in the East Dorset Herald appeared on 25 March 1917 with the title “Acorns Urgently Needed”. It went on to state that the Superintendent of the Royal Navy cordite factory at Wareham would pay at a rate of 1s/3d per bushel for acorns. Strangely enough there was no mention of horse-chestnuts, but it is understood that large quantities were used in the same factory in the manufacture of the much needed explosive cordite.

An article by Iris Morris in the magazine Dorset Life in April 1993 provides much information concerning the history of the Royal Navy cordite factory and recalls that “it was during the first few weeks of World War I that Winston Churchill, the First Lord of the Admiralty, was insistent on the need for the Royal Navy to have its own independent supply of the propellant (cordite) for the manufacture of shells”.

So after nearly 80 years, I find that it is Winston Churchill I had to thank for those welcome trips out from school ‘conkering’ and collecting acorns – a memory revived every autumn when I see schoolboys collecting conkers on Godstone Green!

Arthur Crowhurst lived in Godstone in Surrey all his adult life. He was a very active member of the village, chairing the village club for over 50 years and and the Parish council for almost as many. He is also fondly remembered for his fundraising activities and for his annual appearance as Father Christmas at the village school. The building of a new housing estate in recent years allowed his memory to continue with the main access road being called “Crowhurst Mead”.

Here is some background information from her programme “Conkers – collected for use in two world wars”.

At the beginning of the First World War, cordite – the smokeless powder used as a propellant in small arms ammunition and artillery – was imported, but when blockades made shipping difficult Britain needed to look closer to home for sources of cordite. One of the ingredients required for making cordite is acetone, which is made from starch. At the beginning of the war we relied on imported maize and even potatoes for starch. When supply routes were cut, Lloyd George, Minister of Munitions, asked Professor Chaim Weizman of Manchester University to come up with an alternative way for making acetone. Weizmann, devised a process to extract the solvent from horse chestnuts – conkers. One of the factories was at Poole in Dorset, producing as much as 90,000 gallons of acetone a year. When supplies of maize ran short, it was supplemented with horse chestnuts collected by schoolchildren.

More information is on the English Heritage website and also here

The Imperial War Museum website has some interesting information too.

I am Silversurfers.com marketing director and am delighted to be a member of the team developing and growing this exciting new online community. At Silversurfers, my focus will be to implement marketing solutions which enhance our brand and build relationships with our community. To that end, I believe in creating flexible and integrated communications solutions to support and meet our business objectives. In the last 10 years I have rolled out this approach successfully with a diverse range of companies including ABN AMRO, Ricoh, AMD, Lombard Technology Services, Forensic Risk Alliance, ITV, BT, Neilson Active Holidays and Forrester Research. I have a Law degree from UCL (London) and am a Governor at Brighton and Hove Highschool. In my spare time I love to travel and have just returned from touring Europe in an American Motorhome for 15 months. This gave me the opportunity to sample regional food and wine (another passion) and to get a real insight into the diversity of European culture. I am also an animal lover and my husband and I rescued a few dogs on our travels and found them loving homes in the UK.