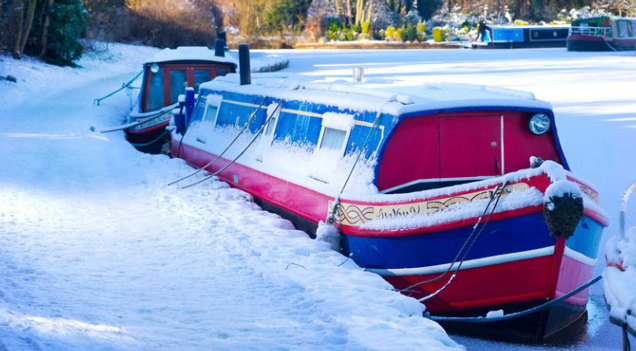 The Father Christmas boat run on the Leeds & Liverpool canal was becoming an annual event.

It was to take place at the Burnley Road Wharf starting off with Santa stepping off the boat at 1 pm on the dot. The fun day had started at 11 am with several voluntary organisations all doing their specialities. There was a children’s fancy dress, a canine fancy dress, a puppeteer and many other side shows so it was crucial we slotted into out allotted time slot.  It was turning into a nightmare. We had spent the night on the boat making sure everything was just so but the weather was closing in and there was nothing we could do about it

We had been fund raising all year. During the last three months run up to Santa’s boat run we had a raffle, one of many. This one was special as there were only two prizes. The first prize was to become my boat crew on the run into Burnley, an eight mile trip. The only stipulation was the crew had to be a couple. The second prize was to again be my boat crew but for the return journey from Burnley boat yard to Wanless Water.

Today was the big day although our winners from the raffle were late by 40 minutes, as in the dark they had gone to the wrong mooring but thankfully had arrived all of a huff and puff yet excited to get going. We had to negotiate seven locks to be at Brierfield Wharf for 10 am to pick up Santa and his many sacks of presents. We had allowed ourselves a 30 minutes loading time slot, then on to Burnley for 1pm. Lillian my lovely 40 foot narrow boat was all trimmed up. We had started trimming her up at 7am that morning. Thankfully it had been a moonlit night although it was freezing cold and the canal was frozen solid. We were stuck in the ice and even though Lillian weighed in at 7 tons we were no match for the ice. The Burnley boatyard’s Icebreaker was on its way to us to free us from our iced up moorings at Wanless water but time was running out.

Bless them they had done an ice breaking run the day before but overnight the ice had come back. The Ice breaker was moored only one and a half miles away at Foulridge Wharf but the men had to get from Burnley to Foulridge then catch the 8 am traffic lights on the mile tunnel. If they missed the 8 am slot they would have to wait for the next green light at 9am. The Ice breaker drew alongside us about fifteen minutes after the crew arrived. The skipper  shouted for us to follow him. I fired up Lilian’s engine and the familiar thump of her 24 horse power engine came lazily into life. We slotted in behind the powerful icebreaker which at that moment in time looked a little bit like a bronco horse at a rodeo as the skipper powered up the engine. It rode up onto the ice then plunged down as it broke its way through and then back up onto the ice and so we continued.

At Barrowford locks the top lock was open and ready to receive both boats. We steamed in to the lock side by side throwing the engines into hard reverse as we entered it and drifted to the far lock gate. Thankfully the ice in the locks was only centimetres thick and the team of lock keepers and our valiant crew had no problems swinging the large two ton gates closed behind us. While we were in the first lock our crew had the next one ready for us and so it went on. Within roughly 40 minutes at the last lock we pulled over to let our exhausted crew on board. We had cleared all seven locks and were now sailing towards Brierfield at full speed of 4 mph.

When we arrived at Brierfield Wharf Santa was there to meet us. He was soon on board tucked up in the galley with a hot cup of tea and bacon butty. The Icebreaker had not stopped at Brierfield but had carried on. We set off just before 11 am and made good progress as we had about 5 miles to go so panic over we would get there on time.

Father Christmas was a local well known landscape painter who had matched our fundraising twice over. He had sold some of his less well known paintings and as it was for charity he got good money. He had borrowed a beautiful Father Christmas outfit from a friend who had done the job at a well known Manchester Store. I was so proud of our combined effort I think I had a tear in my eyes or was it the cold breeze? 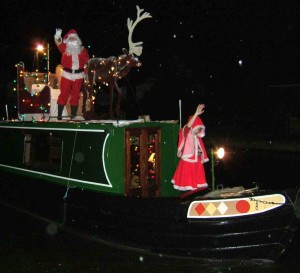 As we navigated the Burnley straight mile my wife turned on Lilian’s loud speakers and the tune of jingle bells could be heard across the town. The spectators were cheering us on with children running alongside us on the tow path. Father Christmas was on the bow of the boat waving to the crowds. We noisily came into the Burnley Road Wharf docking area. The icebreaking team were there to take our mooring ropes and made docking seamless. As we came to rest Father Christmas stepped off the boat like a seasoned deck hand. The children were cheering, the parents applauding and then the Mayor’s officer stepped forward and made a gap for the Mayor to welcome Father Christmas. It was a wonder world for the children as the wrapped presents were handed out to them. The press took photographs of the Mayor and Father Christmas and each child was photographed at they collected a present. Meanwhile my crew including the Ice breaker crew all tucked into mulled wine and mince pies. The Ice breaker crew and myself as owner of Lilian invited the spectators to come aboard to have a look around each vessel. By 4.30 pm the event had finished. Then with the icebreaker we made our way to Burnley boat yard were our crew departed. My wife and I would spend the night with invited paying guests that had paid for the privilege of having the evening with us aboard a traditional narrow boat. All the money raised would go to next year’s Santa’s fund.

The next morning the new crew arrived for the return journey to Wanless Water, but that is another story ….

Since retiring full time and having trotted round the world in our younger and healthier times done Europe before the madness of the euro. We now travel around this beautiful country called GREAT Britain. In 2010 we came down from Northumberland to Devon having spent all summer touring Scotland we spent the winter there looking after the Camping and Caravanning club site at Bellingham. We enjoy our life style especially since I was diagnosed as having Asbestosis in both lungs in 2002 and was given 5 years before I would have to succumb to using oxygen just to breath. We avoid Towns and Cities as much as possible as the fumes make me very ill for days. The two big clubs have camp sites out in the country so that’s where you will find us.I have been into computers ever since I bought Clive Sinclair’s ZX 81 in 1981. I spend a lot of time writing blogs and enjoy writing to friends around the world. But not having a land line used to have its draw backs but in this age of technology mobile internet is now available to the travelling man. With my mobile phones contract coming to an end I looked at all the options that phone companies had to offer. My new contract mobile phone is a Samsung Galaxy 2 an all singing dancing Android, the telephone side of this Android is only one tenth of its capabilities. Its main function for me is its internet hosting. I can run two laptops simultaneously down load itunes to my ipod and keep up with twitter, face book, and emails with the greatest of ease. I would recommend an Android to all caravanners and motor homers.

Latest posts by opelaccent (see all)