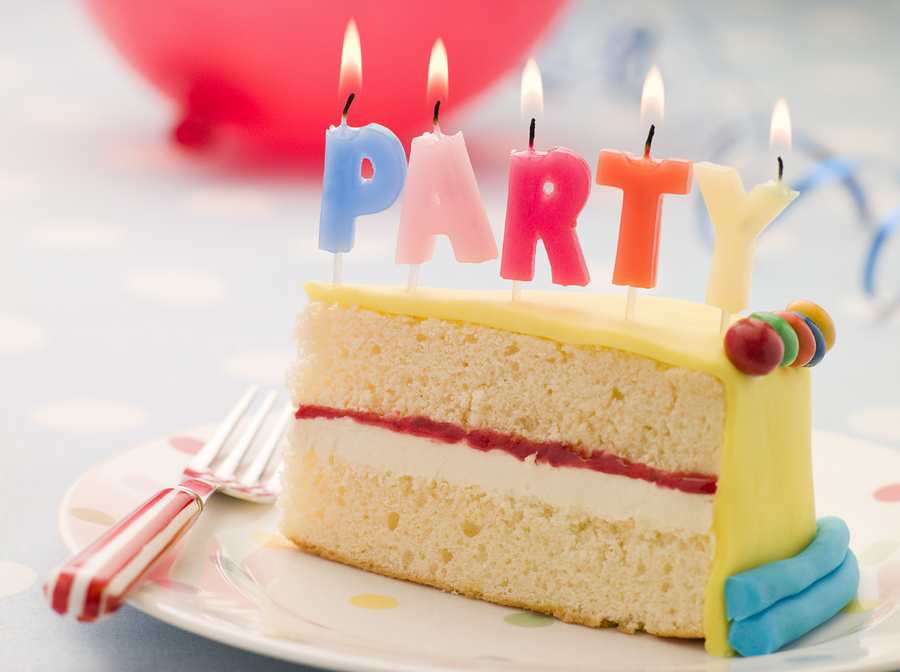 I always thought that the first party in any child’s life is special, a celebration of a year full of joys and wonder with parents congratulating themselves on producing such a perfect little human being.

However nowadays the first party is often held before they are born! One of my daughter’s friends is holding a “Baby Shower” next week. This is becoming a celebration which I think originated in America. It is held by the mother-to-be and is remarkably like a wedding in that there is a Wish List of gifts for the baby. Presents are bought by friends and relations providing items that will be needed for the child.

The presents are delivered the day the before the party by the firm who holds the list. The mother then opens the packages and there is lots of cooing at the little garments and glasses of champagne for the guests, a bit like Christmas really.

So then we skip to baby’s first party. This can take many forms- a friend’s daughter in law had a marquee erected in the garden with plenty of food and drink. I felt it was being held more for the parents and their friends rather than the child in question. Others don’t have such an opulent feast and anyway the poor child has no idea what is going on!

Fast forward – when the child is old enough to enjoy their birthday it is usually rather low key and balloons and cake are quite sufficient. Good old games like pass the parcel and musical chairs are a bit old hat but the kids always enjoy them. However party bags are now needed for the little guests containing goodies to take home and enjoy. This has most Mothers trawling the shops looking for suitable “swag”.

If your child is born in the summer things are a lot easier because games can be played in the garden. The egg and spoon race, the three legged race, blind man’s bluff. In fact all the games that you remember from your childhood. A picnic is always fun too even though it can be a bit messy. If you don’t have a garden a nearby park will do- if you can find a quiet corner!

Then at about four the children need something a bit more than balloons and cake, and the numbers of their friends has increased so your house or garden will not be surfice. The answer is to find another venue, preferably with enough people to help so that all you have to do is arrive with balloons and cake.

The first time I did this I held the party at my daughter’s nursery which was wonderful. The girls there made all the food, organised games and genuinely gave all the guests a wonderful time. All I had to do was roll up with the goodie bags for the kids to take home.

By the time the next party came around we had moved to a bigger house so it was possible to hold the party at home. However a magician was required to keep everyone amused and delighted. Magicians come in and out of fashion so it is essential that you employ the right one. Otherwise you will be told in no uncertain terms that at so and so’s party they had the most popular one going. Who of course is booked up six months in advance.

One year I employed a chap who was a fantastic magician and had the children spell bound. I was rather worried about the dog eating the white bunny so he was firmly locked in the kitchen. The dog, not the bunny! Chatting to the chap afterwards he told me that he used to be a Bank Manager. Quite a change in careers. He was so fantastic that my daughter wanted him for the next party which saved me from racking my brains again.

At all parties cakes are a nightmare and mothers can be reduced to tears with effort of making one so special that the kids are in awe of such a beautiful piece of confectionary. They don’t know that the icing has had a fair amount of tears shed in the making! This magnificent creation is usually devoured in five minutes flat with the mother vowing to buy one from the shops next time.

Sometimes the parties not held at home. McDonalds come top of the list but I am afraid I put my size seven shoes down flat at the idea. I couldn’t bear trying to control twelve children, making them sit and choose what they had wanted. I took my daughter to one and the poor girl nominated to be their waitress got their orders muddled up, and mayhem followed.

Luckily I had a fantastic Pizza restaurant nearby where we lived. I asked if they catered for children’s parties and the answer was a resounding yes. All Italians love children and I couldn’t fault it. The waiters were so good humoured and they all had the patience of a saint. Making the pizzas in front of the kid’s eyes was considered the next best thing to pulling a rabbit out of a hat.

Then onto the themed parties…..those certainly stretches a parent’s imagination. I once held a “Spice Girls” party and the girls certainly entered into the spirit of the pop stars! My husband was shocked by the mini skirts and dresses, never mind the make-up as the girls were only about 12. What they didn’t know was that I had hired a stretch limo and there were screams of delight when it turned up at the door. I know that is quite the norm now, but it certainly wasn’t then! They had a ball being driven around London and then back to the beloved Pizza place.

The limo was so popular that I managed to get away with it for the next year which was a relief! However how was I going to top that?

I worked in the fashion business and used make-up and hairdressers a lot of the time. I rather gingerly asked two of them whether they would come along and do a make-over for my daughter’s party. They said yes, at a price! But it was worth every penny.

All the guests and my daughter had to turn up with freshly washed hair and no make-up. In the morning they were given a rather “kooky” look and posed for before and after pictures. We had lunch in the studio and then the girls were treated to a sophisticated make-up making them look as if they were off to a very special dinner party. Again there were photographs taken and all of them were thrilled silly.

Then came the year that only tickets to see their favourite boy band was acceptable. However any parents were banned from going in with them. I can tell you that a fair few of us Mums were biting our fingernails waiting for our darling daughters to emerge in one piece!

It is difficult nowadays to decide whether to celebrate the “coming of age” at eighteen or twenty one. Unfortunately teenagers today seem to think they should celebrate both.

For her eighteenth my daughter wanted a black tie dinner for her and her friends in a rather smart hotel. It was the first time that boys had been invited to any of my daughter’s parties. It was wonderful to see that they had all made an effort to look as dazzling as possible. The bill was equally dazzling but hey ho you are only 18 once, thank goodness.

Onto the 21st. For once some grown-ups had been invited to the celebrations. We like to think that it was because we are very good company. I am not sure that it true, but she did get splendid presents. We went to a swish nightclub where there was dinner and dancing, the food was fabulous and it was lovely to be able to watch our daughter and pals dance away merrily. We grown-ups were told in advance not to dance unless it was a slow number, in case of causing severe embarrassment.

It was a wonderful evening but I think it was also quite a relief to know that it was the last party I would have to organise.

Only it wasn’t was it? We oldies have parties when we reach a certain age, the 50th, the 60th and even more. And we have to think of our parents too, their birthdays are most certainly worth celebrating.

Long live the party, the planning, the date and the guest list not to mention the rest of the to-do list. The collapse of exhaustion afterwards glowing with pride or was it just too many glasses raised to toast the birthday man or woman!

Enjoy it while you can!