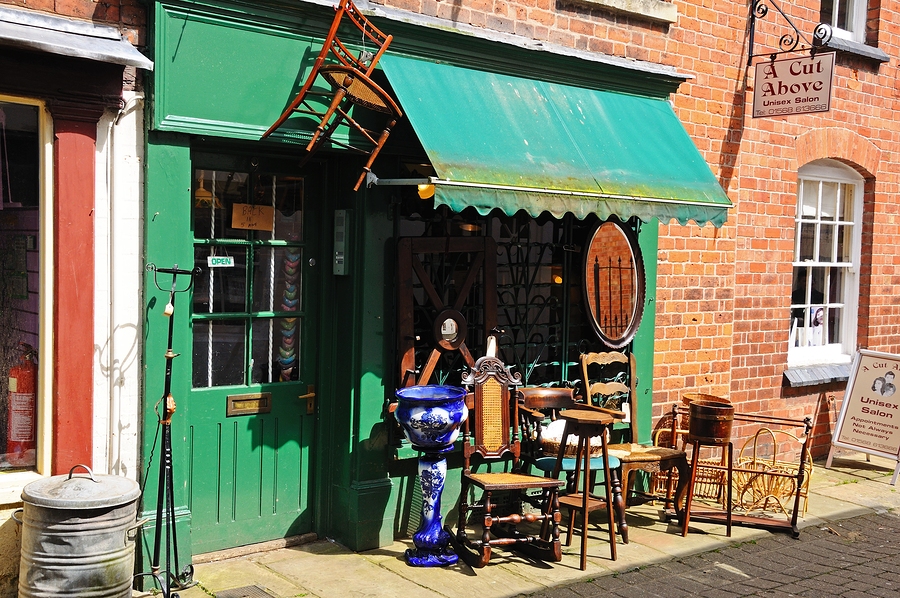 The abrupt screech of brakes brings me down to earth from my thoughts.

He reverses without answering.

“That’s what’s up,” he says as I follow his finger.

Sitting on the pavement outside a house is a dumped writing desk and four chairs.

“We are not taking those home,” I snap.

But Hubby isn’t listening. He’s out of the car inspecting the desk.

He is a chip off the old bloke – may he rest in peace – always on the lookout for anything dumped he can get his hands on.

It’s the same when he takes something to the Dump.  More often than not, he returns with something else.

“Alan, this is ridiculous,” I start to say but it’s no good, he’s already on his phone calling our son.

“The desk has potential.” I hear him say. “I’ll come and pick you up so you can help me load it into the car.”

I get out of the car. “How about our groceries?” I protest.

“Don’t worry love – the supermarket won’t run away. Julie, do me a favour – stay here till I return.”

“What on earth for?”

“To keep an eye of course, just in case someone tries to swipe it,” he says and jumps behind the wheel.

I sit on one of the chairs fuming and thinking of the thunder I’ll let loose once we’ve done our shopping and we get back home.

My mind whizzes back to last week:

There we were all dolled up walking to our local pub for our friend’s party when hubby spots a dumped greenhouse at the top of our street.

“It’s much better than our one,” he says as he gives it the look over.

He was right – it was in a much better shape than ours and bigger too.

And of course he had to have it.

“Come on Julie, grab the other end.”

I had no choice but to give him a hand to carry it back home.

“Next time you take me out I’ll wear overalls instead of a pretty top,” I moaned as we carted it back to our house.

Now the greenhouse is sitting in our living room awaiting set up.

In less than ten minutes he is back with our son Jack in tow.

“You’re right dad, a lick of paint and it will look great in my room.”

I watch father and son remove all six draws from the desk and in no time load the whole thing into the vehicle.

“Talk about Steptoe and Son,” I call out and Hubby laughs. Our son hasn’t got a clue what I’m talking about.

“You’ll have to squeeze into the back of the car to hold onto it in case it topples” he tells Jack.

And guess what – now, there’s no room for me in the car.

“Sorry you’re stuck here Julie.  I’ll make it up to you when we go out this evening.”

“Ha, that’s if we don’t bump into another piece of furniture or some other junk on the way.”

“The desk will be as good as new when I’ve finished with it, you’ll see.” he says as he gets in the car once again.

He’s right of course – he has restored an infinity of items big and small. All found dumped somewhere or other.

Once he even found a Tiffany lamp which is now the pride and joy of our living room.

“I’m going to start walking,” I call out to him. “Pick me up when you get back.

Well, with the writing desk safely in our house, he returns and picks me up – a satisfied grin on his face.

I don’t answer. He turns the key in the ignition and we drive off.

“That piece of furniture you just took home…”

Now I’m the one with a grin on my face.

“After you drove off with the desk, a guy in a van came looking for it.”

“He said he couldn’t fit all the furniture in the van and did a second round to pick up the rest. He was moving.”

“Are you having a laugh?”

Another abrupt screech of brakes.

Alan stops the car and turns to face me. “What did you say?”

“I told him Steptoe and Son must have picked it up. He didn’t think it was funny.”