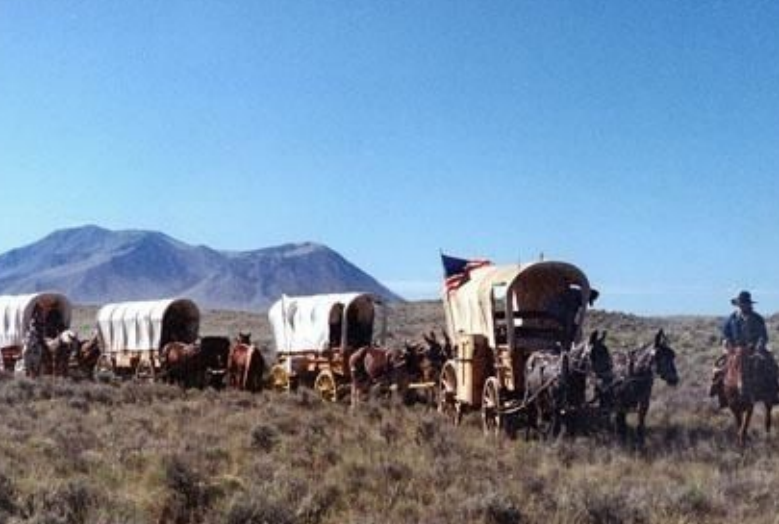 My husband was a keen ‘cowboys and indians’ fan. The old-fashioned movie kind, not the sports teams. He loved all those Westerns with their battles on horseback and being surrounded by ‘the savages’. Heroes like John Wayne, Alan Ladd, Randolph Scott. He always wanted the Indians to win. When he played as a kid, he was always Geronimo.

Since he has been gone, I have been reminded of his favorite movies about the pioneers and their wagon trains across the country. The family who loaded up everything – the special china and their piano (clearly things they would need along the way!) into their covered wagon to start a new life in the West.

As they travelled, some of them succumbed to illness or attack. Their loved ones would be buried in the desert and the rest of them would carry on “to Oregon”. I am carrying on. Not wearing a shawl and pokey bonnet, but carrying on to Oregon. (Metaphorically speaking)

As the old song goes – “what I did for love” I did what any lover and partner would do when they are joined to someone in such a way that there are times when you really don’t think you can go on without them.

At the risk of sounding corny, if you love someone, you will preserve their dignity for no other reason or reward than that you love them. Love is an intangible thing. So how is it then that you feel it with such strength? How can it make you do what you do when Fronto Temporal Degeneration (FTD) takes a hold?

“Love conquers all” right? Only problem is, we live in the 21st century and not that of Virgil in the year 40 BC. We have different problems to conquer. Yes, there were diseases around in Virgil’s day that no-one could explain. But people were also likely to die as a result of invasion from foreign forces. I guess you could say that diseases about which we know so little are the new ‘invaders’. They’ve been around for a long time but we still don’t know how to cure them. Even love can’t conquer that.

FTD and other dementias are just a small example. Huntingdon’s disease and cystic fibrosis being others. The cruel thing about any early onset dementia is that you have a good life dangled before you like a carrot. You meet your love, raise your children, work hard, hoping for a reward later. FTD takes that reward off the table. Your love is tested to the point of screaming.

On the trail to the West, you had no choice but to carry on after you buried someone. If you didn’t you would be left in the desert to die too. I am carrying on along the trail. I don’t know where we’re going, when we will get there, or even if we will, but I’ll keep driving my wagon.

I will try and do all the things that he would have wanted us to do together. Richard Bach says: “True love stories never have endings”. Right now our team of horses is down to one and our wagon has lost a wheel. But Oregon is not in sight yet, so I’ll keep going.

I scattered some of his ashes in the desert. A place where he often wondered “How did they ever find the Indians?” when he looked at the vast open spaces of the Arizona landscape. We made our home in the very place that was the stuff of his childhood dreams.

Our wagon rolls on.

I am an ex-pat Brit living in Phoenix,Arizona for the last fifteen years. I have two sons aged 28 and 30 and 4 grandchildren. My husband died from Frontotemporal Degeneration (FTD) and early-onset Alzheimer's disease last year, aged 57. I am a registered nurse and now work as a Clinical Manager in a hospital. I love music and reading and writing my blog. I plan to publish my book - "The Dance" in 2014. It tells of our journey through FTD over the five-years span of my husband's illness. I hope you enjoy my work.