One Last Push – will you sign our open letter to make World Polio Day count? 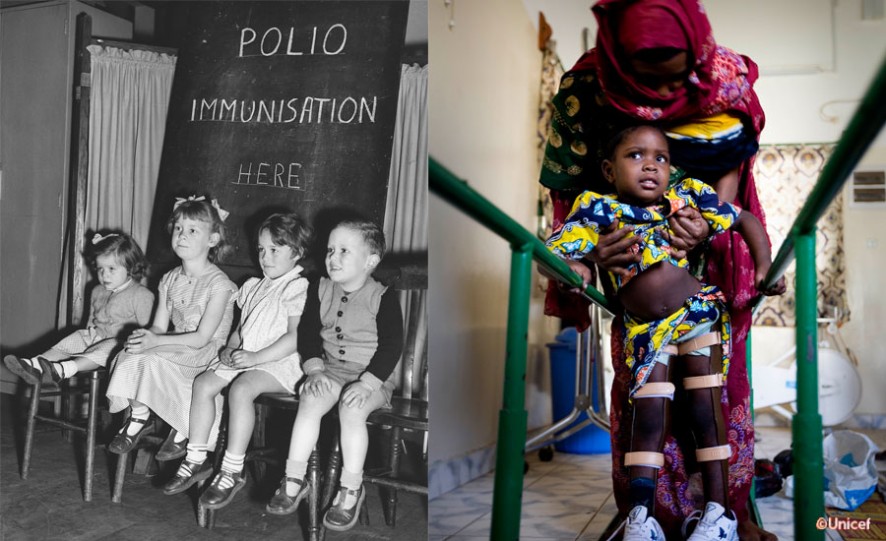 If you grew up in Britain in the 50s and 60s you’ll remember how polio used to cast a shadow over our schools and families.

Mums and dads everywhere feared this cruel and unpredictable disease which could cause irreversible paralysis in children. Charity collection boxes modelled on boys and girls in callipers were a heart-breaking reminder of how serious polio could be. Some of us had school friends whose lives were changed forever by polio. Some of us contracted the virus ourselves and are still dealing with its consequences decades later.

Eventually we beat polio in Britain through mass immunisation drives in schools. There hasn’t been a domestically-acquired case here since 1982. But it’s shocking to think that the virus still survives today, in a handful of the world’s poorest and most remote places.

On 23 October, the day prior to World Polio Day, an open letter (see below) urging the Government to fulfil its commitment to the Global Polio Eradication Initiative will be sent to the print media.

Will you add your name to the signatures? All you need to do is fill in your details in the boxes below, and the One Last Push campaign will do the rest.

You’ll be supporting thousands of volunteer vaccination workers who have polio at bay in some of the world’s most inaccessible regions. And you’ll be honouring the memory of everyone who never gave in to polio.

OPEN LETTER TO MPS FROM ONE LAST PUSH

Ahead of World Polio Day tomorrow, we the undersigned are joining together to give One Last Push in the battle to end polio forever.

The worldwide campaign against this terrible disease is now reaching a crucial moment. Last year, the World Health Organisation (WHO) declared India to be polio-free. In July 2015 they announced that Nigeria is also on course for a polio-free future with no new cases detected for twelve months. Only Pakistan and Afghanistan have reported cases of wild poliovirus this year — and total cases are in steep decline.

It is now a real possibility that we could eradicate polio completely before the next UK General Election in 2020. This would make it only the second disease in history that we have managed to wipe out.

But we can only win this historic victory if the UK Government follows up on the fantastic support it has given the Global Polio Eradication Initiative so far. We need our Government to keep backing polio efforts until the world is certified polio-free.

Up until the 1980s, polio was still paralysing children here in Britain, and there are still people struggling with the effects of this today. Now there is a real chance to make sure that no child, no matter where they live, has to suffer from this disease.

Today we are calling on people across the UK to contact their MPs and urge them to publicly back Britain’s polio commitment. Let’s make sure that every one of the UK’s 650 Members of Parliament will stand up for Britain’s pledges on polio and be part of the Parliament that ends polio forever.

Please visit www.onelastpush.org where you can send this message directly to your local MP. You will be backing thousands of volunteer health workers in some of the world’s most inaccessible regions. These are local people who travel on foot, by bicycle, donkey, camel or elephant to help vaccinate every last child.

To every MP, our request is simple. Please keep up the pressure on polio. Please join us in giving One Last Push — and ensure that by 2020 we have wiped out this cruel disease once and for all.