This site uses cookiesClick here to remove this messageMore information
Welcome to Silversurfers - features, offers, news & social forums for the over 50s...
Silversurfers
Log In Join
Silversurfers
Menu
Articles
Prize DrawsWin one of 5 copies of The Kinks – Sunny Afternoon, The Very Best Of 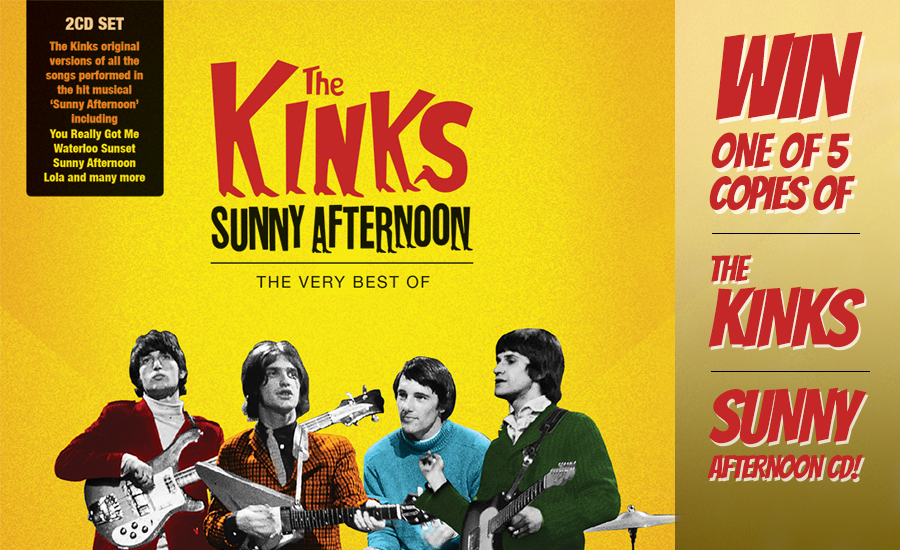 Win one of 5 copies of The Kinks – Sunny Afternoon, The Very Best Of

This month you could be in with a chance of winning one of 5 copies of  THE KINKS – SUNNY AFTERNOON, THE VERY BEST OF (2CD)

Original Kinks recordings of songs from the successful West End musical ‘Sunny Afternoon’, including the hits ‘You Really Got Me’, ‘Waterloo Sunset’, ‘Sunny Afternoon’, ‘Dedicated Follower Of Fashion’, ‘Lola’, ‘All Day And All Of The Night’ and more.

One of the most iconic and influential British bands of all-time, The Kinks release ‘Sunny Afternoon, The Very Best Of ’ – a must-have 2-disc retrospective – on October 16th on the BMG label.

The album features original versions of all the songs from the hit West End musical with added bonus tracks not included in the production plus some of Ray Davies’s personal picks he feels fit into the context of the release, including other Kinks hits and classics, BBC interviews and BBC session tracks.

Along with a total of 9 UK top 5 hit singles including 3 Number 1s, the album, unlike other Kinks compilations, features tracks chosen by Ray that were not originally hits but over the years have become so due to TV shows, films and covers by other artists.

Congratulations to our winner
Colin Taylor, Sue Howe, Belinda Fewings, Dave Jarvis & Janet Flynn
We will contact you via email to assist in claiming your prize!