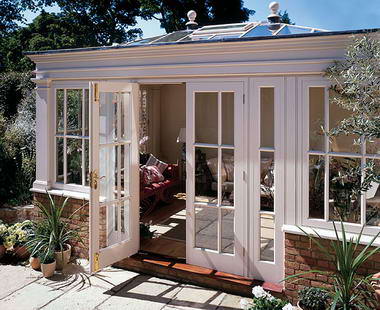 The government has just announced a relaxation of the UK planning laws in order to stimulate the economy, which will supposedly benefit property developers, builders and home owners. For home-owners the principle change is a year long “planning holiday” during which the size of single-story extensions that can be currently built without planning permission, can be doubled. This means that extensions and conservatories can be added, up to 8 metres (26 feet & 3 inches) long without any planning permission, so long as the house is not in a conservation area. With the current dire housing market, many householders have been staying put in their properties and building extra rooms or putting a conservatory on their house.

Each year approximately 200,000 households apply for permission to build such extensions and about 90% of the request are granted by local authorities. The positive thing about this new move by the government is it will almost certainly lead to more extensions and conservatories being built with the uplift in furnishings and fittings in them, so stimulating both the building industry and also related retail shops. The negative aspect is because no planning permission is required there may be quite a lot of disputes between neighbours.   If people don’t like the size of the house extension they will be unable to prevent, oppose it, or complain to the council, which they currently can do. The normal building rules will be reintroduced again in 2015.

What is your view? Are you tempted to build an extension or a conservatory?

Anne
17th Sep 2012
0
Thanks for voting!
Does this include Scotland as we have some funny laws up here x
ReplyFlag as inappropriate

Have you ever considering buying a property overseas?