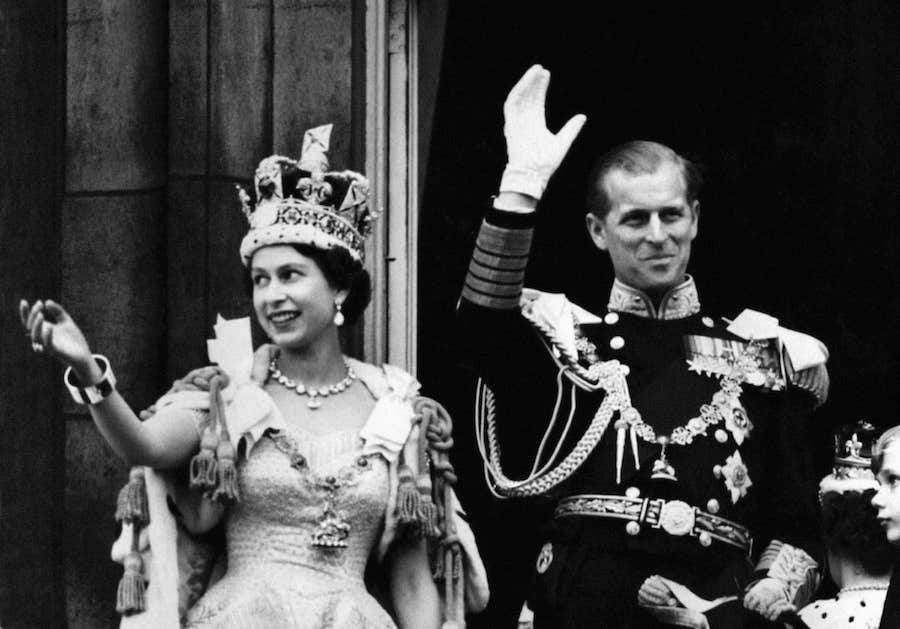 Forty One Gun Salute to a fellow sailor

Forty One Gun Salute to a fellow sailor

Fire One! Fire Two!
Prince Philip, he was not yet two
When saved by the Navy from Corfu.

Fire three! Fire Four!
Father and mother separate;
No home, no parents and no State.

Fire eleven! Fire Twelve!
Soon after that he met the Queen
Still a Princess of just thirteen.

Fire Seventeen! Fire Eighteen!
Continued as boldly as he began;
Mentioned in despatches at Cape Matapan.

Fire Nineteen! Fire Twenty!
On HMS Wallace in ‘43
Was at the invasion of Sicily.

Fire Twenty Five! Fire Twenty Six!
The war is over, life is heaven;
Engaged and married in 47.

Fire thirty one! Fire thirty two!
In 52 he learns to fly-
Whirlybirds come by and by.

Fire Thirty three! Fire Thirty four!
On tour in Kenya doing their thing,
Taking the place of the ailing King.

Fire Thirtyfive! Fire thirty six!
Far from home their tour must cease,
As soon as they learn of the King’s demise.

Fire Thirty Nine! Fire Forty!
Uses his passion and brilliant range
Supporting Wildlife and Climate Change.
Inspiring the young to the outdoor life;
And steadfastly cheering on his wife.

Fire Forty One!
At 99 he’s laid to rest
In Windsor, a place that he loves best.
Eternal father, and bugle calls
Echo round the Royal walls,
Embodying his glorious past:
Action Stations to the last.

LaurelC
163 Up Votes
Artist and writer, retired seafarer. Author (with late husband Bill) of best selling "Sell Up and Sail" Cruised under sail nearly 100,00 miles until the age of 83.

Pay it Forward
By LaurelC
Pay It Forward Someone had the grace to throw a sunbeam in my way; A meeting, very...
Read More
Swallows Return
By LaurelC
Swallows Return As we emerge from the long dark days, Blinking, confused, still in a...
Read More
92 Today
By LaurelC
92 Today I wish that I could be like you— Oh no you don’t, I’m 92. How does it feel...
Read More
Snowdrops
By LaurelC
Snowdrops My feet are in the freezing earth, My head is in the air It’s cold, so cold...
Read More
If you enjoyed reading this, show your appreciation to the author with a thumbs up! 3

LaurelC would love your feedback, please leave your comments below:

It Was Her Own Fault
by Silversurfer9

Haiku in the Garden
by OTrasig

Wide Eyed and Sleepless
by Martdel

Dedicated Followers of Fashion
by Martdel