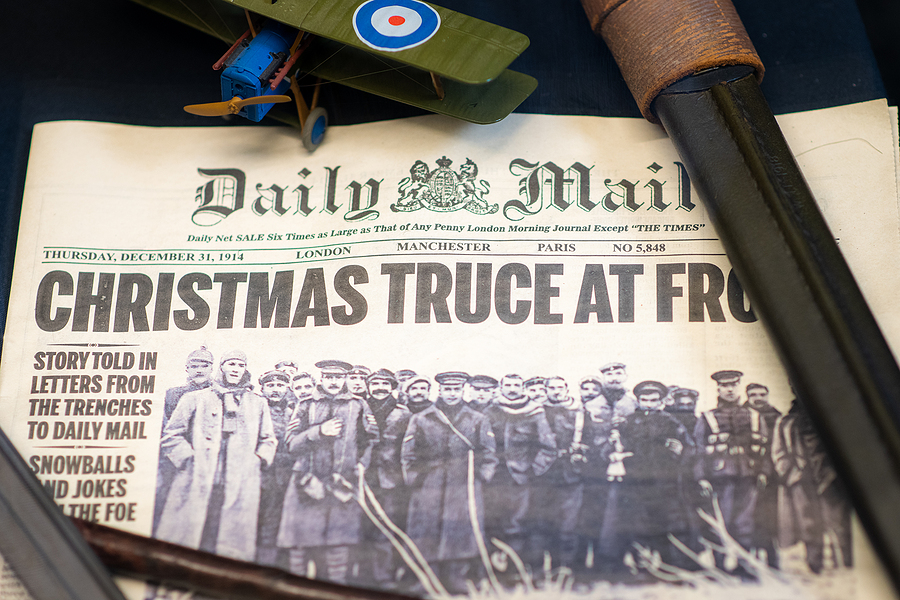 This poem is about the unofficial Christmas truce of December 1914, we all know that historians have rubbished it and tried to dumb it down, we also know that it was probably blown out of all proportion over the years, perhaps that famous football match didn’t happen, but there wasn’t much joy to hang on to in 1914, those men all thought that they would be at home celebrating a win at Christmas, there was certainly enough unrest and camaraderie between the enemies for Generals to issue notices about fraternisation, so let’s all carry on believing that something did happen on that magical Christmas in 1914.

It was cold that grey Christmas in the trench,
Fresh snow had fallen the previous night,
But not even the cold could mask the stench,
of the gangrene caused by severe frostbite,
the continuous sniping without respite.

Yet that Christmas eve in nineteen fourteen,
An unofficial spontaneous truce,
A reprieve from the shelling that had been,
Adjournment of the terrible abuse,
fleeting freedom from the tightening noose.

We had all received packages of food,
really lifting the spirits of each side,
The torrential day’s rain had now subdued,
Brave men who were heroes sat misty eyed,
wondering how war had been glorified.

‘May God protect you and bring you back home’
Princess Mary engraved on a metal case,
Tobacco and sweets under a lid of chrome,
Butterscotch and chocs put smiles on our face,
gifts from back home one could never replace.

The Germans wanted peace, made the first move,
by sending a cake across to our line,
How could we weary soldiers disapprove,
We sent them tobacco, said that was fine,
the thought of peace sent shivers down my spine,

‘It’ll be over by Christmas’ we were told,
Could this be the start of peace in our time,
We were now broken men who once were bold,
Old men at twenty, last year, in our prime,
put in ready made graves, covered in grime.

Christmas goodwill spread twenty seven miles,
Along the trenches it travelled so fast,
Hell holes now filled with happiness and smiles,
Each man wondering, how long would it would last
but for now a peace, a calm unsurpassed.

Then we all heard it, that sound from afar,
Germans singing StilleNacht (Silent Night)
Up in the sky a bright shining star,
shone on No man’s land, setting alight
the destruction, mayhem, remains of the fight.

Next day at eight thirty, winter sun rose,
Four Germans appeared on No man’s land,
Shouting across, ‘We are friends, not your foes,
we wanted to come to shake your hand’
men climbed out of trenches, though it was banned.

A soldier offered his hand, I held out mine
We looked at each other, doubting, unsure,
I gave him a cigarette, a Wills woodbine,
He gave me a drink, first taste of liqueur,
although my enemy, I still felt secure.

Within half an hour hundreds of men,
Sharing their photos, talked like old friends,
Souvenirs swapped and exchanged again,
Insults given out, not meant to offend
thousands of men, wished the day wouldn’t end.

Way down the line a football match was played,
so I heard later, that cold Christmas night,
when back to the trenches our way we made,
To my new German friend, I bid goodnight,
for tomorrow we must resume the fight.

Come the morning we would fire from afar
but it was nice just to show how human we are!

My book World War One in Verse is available, please message me for details.

eric1
3250 Up Votes
Hi, I am a grandfather of four beautiful Grandchildren, I have one son and three daughters, We lost Vickie to Cancer in December 2013, she was 23 years old, whoever said time heals haven't lost a child. My profile picture is of Vickie and I haven't changed it since she died, I have a wonderful loving wife without whom I would not have made it through. My escape is writing poetry, I have had five published to date, I now have two books published 'World War One In Verse' is available on Amazon books and 'Poetry From The Heart' is available on Amazon or Feed a Read, just enter the title and my name Eric Harvey. If you love the 50's, 60.s and 70's my new book of poems will take you back to those days, 'A Poetic Trip Along Memory Lane' will jog your memories of bygone days.

eric1 would love your feedback, please leave your comments below:

I love Autumn but...
by Toni60Smith

The Changing Breeze
by SteveWA

The Bossy Boss
by Maxine Bailey
JOIN SILVERSURFERS AND...