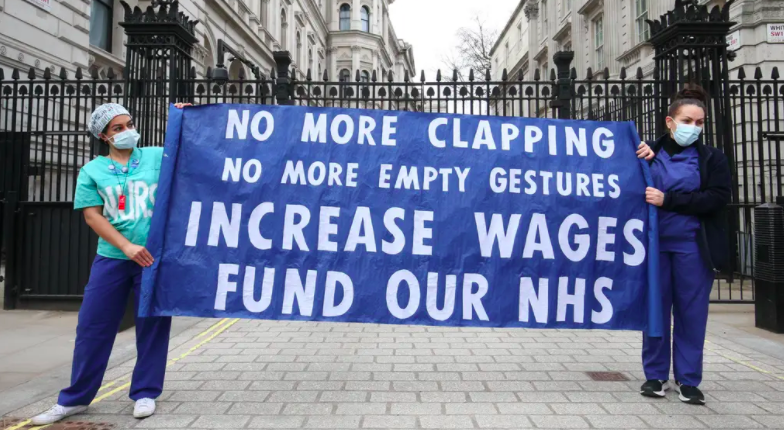 Should NHS nurses get more than a 1% pay rise?

Anger continues to rage over the Government recommending a 1% increase in its submission to the NHS Pay Review Body, which will make an announcement in May.

The government has recommended that NHS staff in England should receive a 1% pay increase this year whilst trying to balance the economies that will be needed to reduce the huge national debt.

Many other public-sector workers will have their pay frozen, with the government warning that the country’s finances are under “huge pressure” because of the pandemic.

On 9 March, the head of NHS England, Sir Simon Stevens told a committee of MPs that the health service’s long-term plan – published in 2019 – assumed a 2.1% increase this year.

But he said “things have changed” since then and said it should now be up to the pay-review body.

The pay-review body will now take evidence from other groups, including unions and NHS bodies, and do its own calculations before making its recommendation around May.

Nurses are not “angels or heroes” but are highly-skilled workers with a key role in safety, the head of the Royal College of Nursing (RCN) has said.

Unison head of health Sara Gorton said: “The Chancellor and the Prime Minister should be ashamed of treating health staff so shabbily.”

“Everyone in the NHS has coped in the toughest conditions this past year. Many have faced the trauma of patients dying, the exhaustion from endless shifts and the strain of chronic understaffing.”

“Yet the Government has shown them zero respect for keeping the NHS on its feet.”

At Prime Minister’s Questions on Wednesday, Labour leader Sir Keir Starmer demanded MPs be allowed to vote on pay increases for NHS workers, as he accused Boris Johnson of “breaking promise after promise”.

He warned nurses face a “real-terms cut” and said the PM was choosing to “shut the door in their face at the first opportunity”, having previously clapped for carers.

Mr Johnson repeatedly claimed a pay increase would be delivered for NHS workers, defended his Government’s spending record and said he would see what the independent pay review body reports back.

What are your views? Is a 1% pay rise fair when all other sectors have had a pay freeze? Or should the NHS workers be awarded a greater pay rise as a reward for the immense pressure caused by the pandemic?