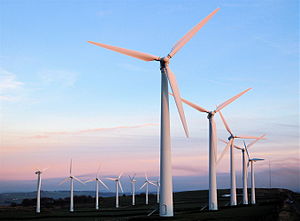 Wind farms … are they unsightly or essential?

Wind is a clean, abundant and entirely renewable source of energy that will become increasing utilised and is in high demand for future decades due to dwindling reserves of fossil fuels. It is also the fastest growing source of electricity generation in developed countries. However manufacture and implementation of wind farms can be costly, and some local people object to wind farms; arguing that they spoil the countryside. The principle location factors for wind farms are a place with: reliable wind directions, strong winds, good communications, away from areas of outstanding natural beauty/ national parks/ site of special scientific interest and if possible away from settlement. Wind blows on the blades, enabling them to turn and generate electricity. The national grid then transmits this power throughout the country.

There are many reasons why we need renewable energy. Demand for energy is increasing as population is increasing, this leads to a growing energy gap. Nuclear energy is becoming less socially expectable, due to the environmental disaster earlier this year in Fukoshima, Japan. We are running out of fossil fuels which provide 80% of global energy supply. Strategically Britain aims to become less dependant on fossil fuels from volatile sources such as Russia and the Middle East. Finally the use of fossil fuels are extremely environmentally damaging as they real ease large amounts of carbon dioxide, which is a major cause of Global warming.

Energy used to install them is typically paid back from 6 to 7 months of them being operational in south England. The government decides where, when and how wind farms are built as you need a detailed planning permission to proceed.

There is a continuing debate whether to place wind farms on or offshore. The advantage of offshore wind farms is they are out of sight, so there are less objections. Also the wind is generally more consistent however there are cost implications building offshore and transporting the power back to mainland. 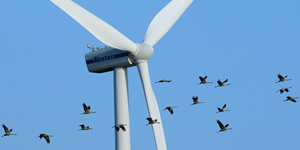 There is some controversy about the wind farms effects on animals, especially birds. It could be argued that the effects of global warming on wildlife will be a lot more severely damaging than the effect on possible deaths of birds caused by collision with the blades. Significantly, the RSPB (Royal Society for the Protection of Birds) does not appear to have major issues on the development of wind farms, this was highlighted recently in a BBC news report. However the most contentious issue is opposition of wind farms from many local communities where they are due to be situated. The reasons for this are: people believe they are an eyesore, locals assume it will devalue their property and there are also issues linked with noise levels that irritate communities.

Wind farms are just the start of an entirely new sustainable energy revolution.

What is your view … unsightly or essential???