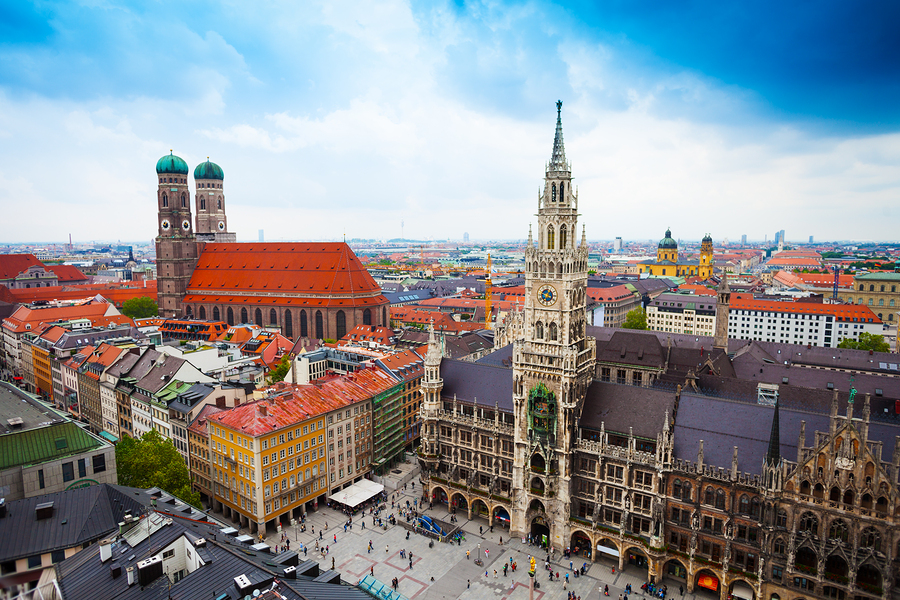 Berlin might get all the glory, but the captivating city of Munich is more than a match for Germany’s infamous capital.

Nestled in the southern state of Bavaria, Munich has an identity that’s all its own. Sure, there’s plenty of beer and bratwurst to go round, but Munich has a much more Italian feel than Berlin, Düsseldorf and Hamburg – and it’s no wonder, as Italy’s just a couple of hours drive away.

Fancy a long weekend in Munich? Here’s our essential guide to this most Mediterranean of German cities…

Munich Airport is Germany’s second busiest airport and there are several direct flights to the city from around the UK. Lufthansa operates flights from Heathrow, Manchester and Birmingham, while easyJet runs flights between Munich and London (to Luton, Stansted and Gatwick), Manchester and Edinburgh. What’s more, the journey time is only around 2-3 hours – so you won’t waste much of your precious long weekend sitting in an aeroplane.

Once you’re in Munich, the public transport system makes it very easy to get around. The s-bahn (suburban) and u-bahn (underground) trains run across the city, and the S1 and S8 trains connect the airport to the city centre.

First, head to Marienplatz to see the Neues Rathaus – New Town Hall – which is one of the city’s most iconic buildings. Its Gothic facade is captivating, but its Glockenspiel is what draws the crowds. Every day at 11am, watch as the Glockenspiel’s statues and bells come to life to tell a tale from local history: in summer, there are also shows at noon and 5pm.

Just a short walk away from Marienplatz is the Frauenkirche, whose two dome-shaped spires are an iconic part of the city’s skyline. First built in the 15th century, this church was bombed in World War Two but was lovingly recreated in the post-war period.

For a slice of local history with a beer on the side, visit the Hofbrauhaus. Probably the world’s most famous beer hall, it dates back to the 1600s and its ballroom is famous for being the site of the first meeting of the Nazi Party in 1920.  Or if you’re craving a dose of European Art, the Alte Pinakothek is renowned for its excellent collection of paintings by the Old Masters.

Elsewhere the BMW-Welt and Museum is a car-lover’s dream come true: a museum/showroom dedicated to BMW vehicles. And to rest your legs after a long day of sightseeing, the lush English Garden – one of Europe’s biggest parks – offers a beautiful, serene place to relax in the city.

Eating and drinking in Munich

Munich is a beer-drinker’s paradise. To truly experience the city’s favourite tipple at its best, visit in October for Oktoberfest, the historic festival which involves a whole lot of drinking and very little else. There’s no shortage of traditional beer halls where you can try famous local brews like Paulaner, Löwenbräu and Augustiner. But the city’s also got a vibrant cafe and bar culture too, and it’s just as easy to get a coffee or cocktail to drink outside on a hot summer’s day as a stein of beer.