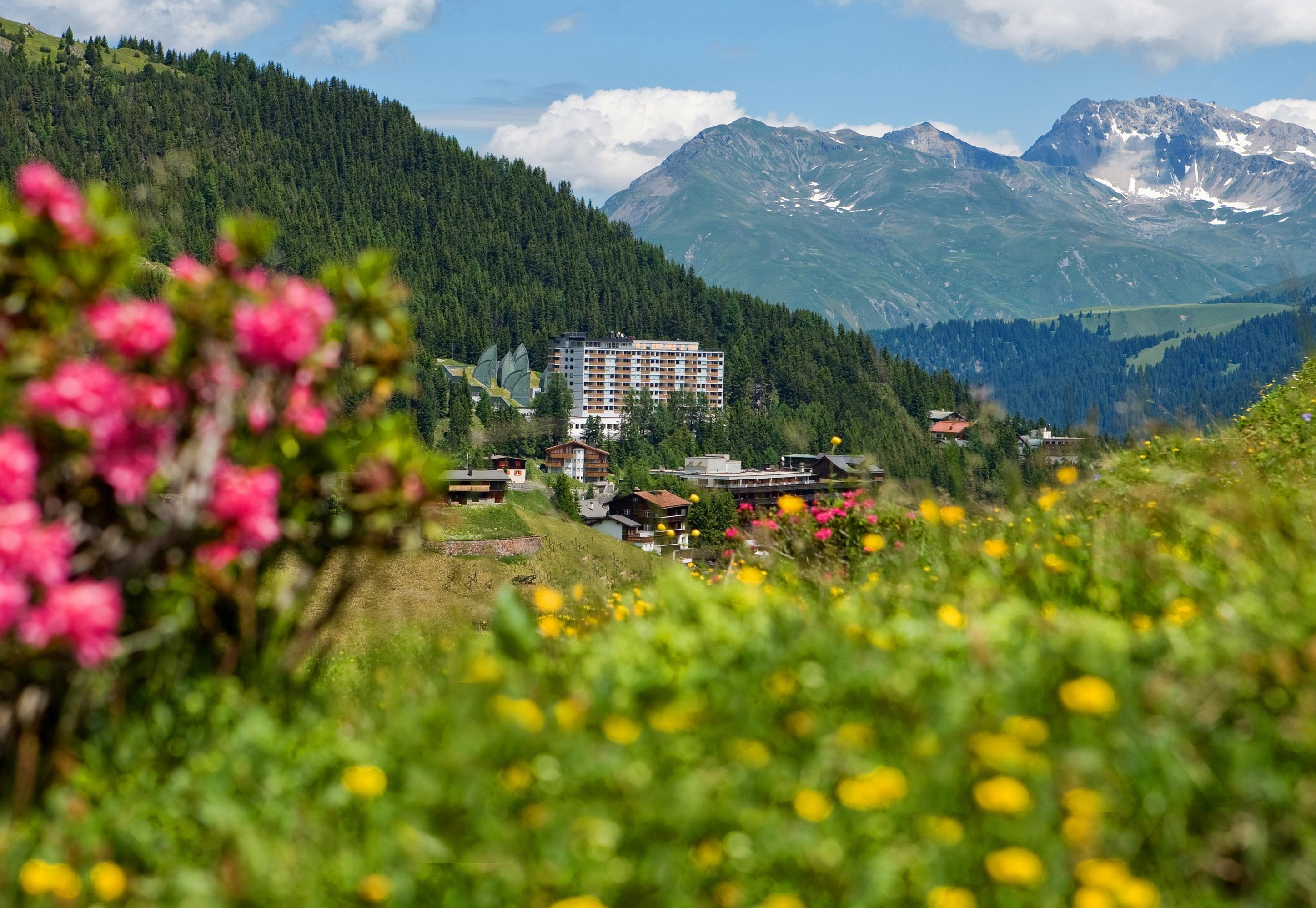 More to Swiss Alps than skiing

Nothing beats pumping your lungs full of fresh, clean air as you cycle through the Alps, followed by a dip in a spa pool, writes Chris Greenwood

Hurtling down the path, it was difficult not to scream with laughter. Not because there was anything funny about mountain biking in Switzerland, but it seemed better than screaming with fear.

The backside of my guide Max disappeared into the distance as he negotiated a series of obstacles, rocks, streams and the occasional cliff face with the agility of a mountain goat.

Meanwhile, I clung on to the handlebars, stood on my pedals and watched the earth fly under my wheels as gravity did its best to get the better of my sense of balance and self-preservation.

If the worst did happen, I could not have picked a better spot to meet my maker. The landscape around the ski resort of Arosa, in east Switzerland, is stunning in its natural beauty.

Summer season mountain biking holidays are a relatively new phenomenon in winter snow resorts, many of which virtually pack up after the last downhillers pick up their skis and go.

For areas left with a combination of lush, green rolling pastures and daredevil craggy drops once the white stuff has receded, the arrival of the two-wheeled sport was a no-brainer.

The charm of unspoilt Arosa is that it’s no St Moritz or Zermatt. It’s a place to come and escape the hustle and bustle of modern life, and to see the best of the Swiss countryside.

Located at the end of the Schanfigg Valley, about 100 miles south east of Zurich, the best chocolate box picture in the world could not recreate its blue skies, dramatic peaks, green pastures and wonderfully clean air.

Part of the fun of this brief escape from the rush of city life is the journey there – a flight into Zurich, a train up to Chur and a second tiny train weaving its way through the slopes and into Arosa itself.

Our base, the Tschuggen Grand Hotel, is a luxurious and historic retreat perched on the side of one of several mountains that encircle the village of Arosa.

The hotel, first built in 1883 and rebuilt in 1966 after it was destroyed by fire, is owned by a wealthy family who have invested huge sums to create an uber-cool retreat.

The blocky main building might look pretty ordinary from the outside, but inside lurks a snug and smart hotel dripping with fashionable touches which appeal to families and the Euro jetset alike.

The hotel began life as a summer month sanatorium for patients with breathing problems, but winter sports enthusiasts realised it was an ideal base for skiing.

Clever engineers excavated thousands of tonnes of granite to conceal a state-of-the-art spa tucked into the side of the mountain behind the hotel.

Connected by a glass walkway, the spa is covered with several pyramid-shaped, glass “light trees” that project natural light on the pool complex and treatment areas.

It’s a truly lovely space for relaxing, swimming or undertaking one of a huge list of therapies or treatments available from the kind of professional and amiable staff you would expect in Switzerland.

There are inviting sauna and steam room areas, complete with a freezing plunge pool and buckets of ice for those who enjoy invigorating their system with shocking changes of temperature.

Beware the dress code though. There is none. Clothes are out and women are welcome to wander into the naked male sauna, although the liberal access is not reciprocated.

But before I could throw myself in the pool, I had to prove myself on two wheels by throwing myself down a mountain. And this is where another hidden gem of the hotel came to the fore – the Tschuggen Express.

Winter guests of the hotel can take advantage of an automatic James Bond-style electric shuttle that rockets them up the mountain behind the hotel to the edge of the ski runs.

The miniature railway really is a marvel of modern engineering, covering 528 metres in less than two and half minutes, while climbing some 150 metres, some at astonishingly steep gradients.

For our group, the shuttle simply meant we avoided an intimidating lung-busting climb at the start of our adventure. Instead our mountain bikes, equipped with suspension and disc brakes, were waiting all ready at the top.

We spent a morning circling the village on a series of well-trodden hiking paths and biking trails, taking in views down into the valley and up to the majestic Weisshorn mountain.

Lunch brought a delicious platter of cured meats and cheeses at an isolated ski cafe where the owner had a remarkable view worthy of a multi-million pound penthouse.

So far, so good, but we had only covered a handful of more than 125 miles of well-maintained walking and cycling paths that circle the village and two lakes of Obersee and Untersee.

When we returned to the hotel in the early afternoon, I made the fateful decision to ask Max to show me a more challenging route. Needless to say, the Tschuggen Express was out this time.

The two of us covered about 10 miles of much more challenging territory, including a lap of an ice-blue glacial lake and a nerve-jarring descent on a path strewn with rocks and boulders, marked either side by an impressive drop.

There were tricky stretches, including a technical manoeuvre across several streams at the bottom of a slope that left me sprawled over the handlebars when my front wheel became caught in a small gap.

I was not reassured when Max turned around at the bottom of one descent and pointed out, with cool satisfaction, where many visiting cyclists fell off.

They, like me, could console themselves afterwards back at the hotel. After a tour of the spa, I was pleased to be able to stay on site for a relaxing evening meal.

Cycling is not the only activity in Arosa outside the ski season. Hikers flock to well-maintained and signposted paths, some of which come complete with barbecues stocked with fire wood.

There is even an 18-hole golf course a short distance away, one of the highest in Europe, where the thin mountain air at 1,850 metres allows balls to fly further than usual.

But for summer thrills, for regular cyclists or those who want a two-wheeled adventure, this resort is sure to set you a challenge.