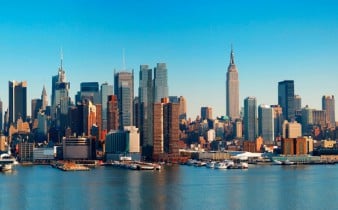 Destinations have to bow to the Big Apple when it comes to popular long-haul holiday spots, it has been revealed.

The company said the New York surge was down to heavy demand for summer trips, Christmas shopping breaks, twin-centre holidays with Boston and even early bookings for 2013.

Second in the list was Thailand, which has sprung back to prominence following a big campaign by Thai Airways. Third was the Maldives, with Las Vegas fourth, Mexico fifth and Mauritius sixth.

Dubai, Florida, St Lucia and Antigua made up the rest of the top 10 while other destinations doing well at present included Vietnam, Cambodia and Japan.

Meanwhile, in another survey, Post Office Travel Money revealed that Sri Lanka was the best value-for-money long-haul destination – for the third year running.

On the American continent, Mexico was the cheapest destination (£60.48 for the items) while of the six US destinations, Washington DC was the best value (£75.52).

Cheapest Caribbean destination was the Dominican Republic (£93.22), while the best value African spot was Gambia (£61.14).

Do you have a favorite destination that ticks the boxes for you?