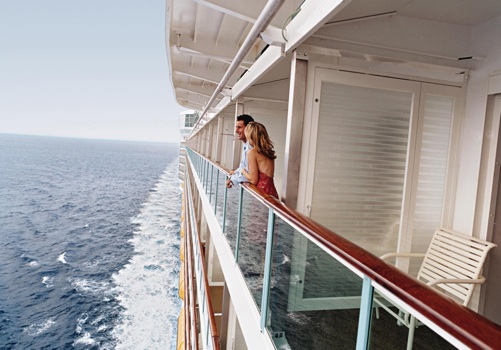 Cruise the Mediterranean in style

With a gentle sea breeze in my hair as the honey-coloured sunset kisses the roofs of Venice, I survey one of the world’s most romantic places from on high – feeling like a film star.

In the space of five days and three countries, I’ve seen dazzling Lamborghinis, tasted olive oil and witnessed what could have been John Lennon and George Harrison coming back to life for one last Beatles gig.

And all thanks to a veritable floating city, which has provided a home-from-home to an international cast of thousands.

I always thought cruises were for older people, with the daily drama provided by the search for the best sunlounger. I never imagined that a cruise in the Mediterranean could deliver such amazing adventure. But I was proved wrong – in spectacular fashion.

Just before our plane touches down at Venice’s Aeroporto Marco Polo, I gain my first glimpse of Royal Caribbean’s cruise liner Voyager Of The Seas.

Amongst the tiny, ant-like boats sharing the waters below, the ship stands out like a shiny skyscraper in a country village.

If you stood this 650 million-dollar leviathan up on its end, it would dwarf Canary Wharf by 200ft.

Capable of holding 3,114 passengers and 1,181 crew, Voyager Of The Seas has rapidly gained a reputation as one of the biggest and best floating hotels in the world.

It has the facilities of a small town: a shopping mall-style promenade, a casino, a night club and an ice rink.

But before sampling these facilities, I embark on the childish joy of riding in a glass lift and gawping at the views.

Another great feature are the cabins – ranging from the cheaper interior staterooms – with views facing into the ship – to luxurious suites complete with balcony views of the sea.

After a breathtaking ‘sailaway’ from Venice, we head for Portoroz in Slovenia, a small former Yugoslav principality which manages to blend the best bits of Western and Eastern Europe.

Nearly everyone speaks English, it’s not expensive and it’s pretty easy to go somewhere off the beaten track, even on a brief visit.

The quaint town of Piran is our first excursion, with narrow, winding streets leading into an expansive square.

In this picturesque place, the locals are amazingly affable: friendly without being overly familiar and laid-back without being rude.

What better way to top off our first excursion than with a wine-tasting in Dobrovo, aptly dubbed the Tuscany of Slovenia?

After a few glasses of the finest vino and a sumptuous three-course meal, it was time to hop back on board Voyager Of The Seas – to see a Beatles tribute band.

Fearing a lame covers act doing a grave disservice to the Fab Four’s back catalogue, I am genuinely surprised by how good they are – so much so that if I squinted I could see John, Paul, George and Ringo on stage for one last time.

I wake on day two rested for our arrival in Bologna, Italy, and an excursion too good to turn down: a visit to the factory of top sports car manufacturer Lamborghini.

Every car is painstakingly constructed by hand over 18 months, like the most expensive Lego set in the world.

Although you won’t get a chance to sit in, let alone drive, one of these £200,000 beasts, the museum of rare and classic Lambos is a photo opportunity to strike envy into friends and family.

On day three, we plot an eastern course to the famous walled city of Dubrovnik in Croatia.

This pearl of the Adriatic has a bloodied past, and the scars of the Yugoslavian civil war in the 1990s remain on some buildings on the outskirts and within the psyche of its townsfolk.

A small museum, with photographs of Dubrovnik citizens killed in the conflict, is a stark reminder of the conflict.

On a happier note, history and art buffs will delight in what the world heritage site has to offer. But be prepared for lots of tourists and steep prices in cafes and souvenir shops.

On day four it’s once again time to say “bongiorno” to Italy, this time in Bari – with the lure of a visit to the Masseria Brancati olive grove, which offers guests olive oil tastings.

In the quirky village of Alberobello, with its conical-shaped houses and tight-knit community, we discover some beautiful craft shops which provide the best souvenirs of our trip. A knitted doll costing less than £7 becomes one of my daughter’s favourite toys.

And so to the final day, where Venice once again awaits with open arms.

What do you say about Venice that hasn’t already been said? This place oozes culture, history and beauty.

Perhaps no visit is complete without a gondola ride, but this is a novelty only once. City boats, operating as a bus network, are faster and better value.

Like Dubrovnik, Venice can be a bit of a tourist trap. As our guide explains, a little research beforehand and a trusty old map can help you make the most of your time.

One ‘must see’ is St Mark’s Basilica, whether you are religious or not. The Byzantine architecture and mausoleum of treasures are jaw-dropping.

After sampling a mojito (or three) at a bar on deck, I find myself among a veritable United Nations of British, Russian, Spanish and American guests relaxing in the warm pool to watch the sunset over Venice.

With some amazing prices on offer from cruise lines, it is possible to enjoy a trip like mine for little more than £500, plus return flights.

However, not everything on board is included in the price. In fact, it can be easy to get carried away as the ship operates a running tab for drinks and other purchases which you must settle before disembarkation.

And British travellers must bear in mind the ship’s tipping policy, which is a distinctly American system. Excursions are also extra, so if money is tight, pick and choose wisely.

But despite these caveats, cruising provides a perfect combination of adventure, sightseeing and relaxation – and there are surely no other types of holidays where you can do so much in such a short space of time.

Ben Wright was a guest of RCCL, which has a guide price for a seven-night Mediterranean cruise in April 2013 of £944 on Navigator Of The Seas, including return flights ex-Heathrow, Manchester or Glasgow. Sailing from Civitavecchia (Rome) to Messina (Sicily), Piraeus (Athens), Kusadasi (Ephesus, Turkey) and Chania (Crete) before return to Civitavecchia for flight home. Price based on April 21 departure. RCCL reservations: 0844 493 2061 and www.royalcaribbean.co.uk