This site uses cookiesClick here to remove this messageMore information
Welcome to Silversurfers - features, offers, news & social forums for the over 50s...
Silversurfers
Log In Join
Silversurfers
Menu
Articles
Articles TravelCruisesArcadia: Who could ask for anything more? 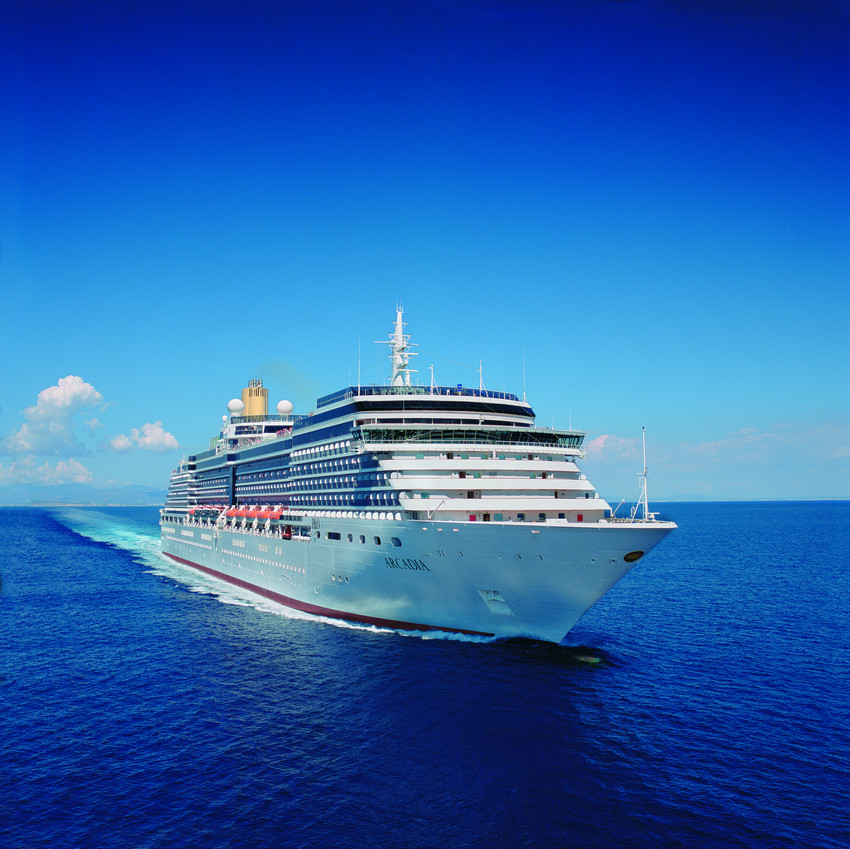 Arcadia: Who could ask for anything more?

My biggest fear when setting off on holiday is losing my luggage at some stage of the journey but if the person travelling happens to be a TV personality known by millions for his immaculate appearance then the loss must be infinitely worse, particularly if it happens just hours before a stage appearance. Yet judge Craig Revel Horwood couldn’t have looked more relaxed when he joined our Strictly Dancing cruise in Gibraltar.

Due on stage in the ship’s lavish three-tier Palladium theatre to answer questions about his meteoric rise to fame on the Saturday night show which regularly trounces X Factor in the ratings, Craig coolly borrowed what he needed and joined our elegant Cruise Director, Benne, looking as if it was entirely natural to sit alongside her in an open-necked casual shirt and three-quarter length trousers. 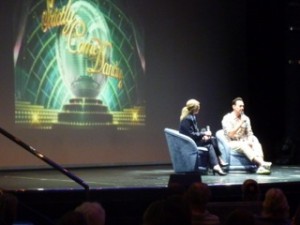 Craig was on board for three days, along with professional dancers Camilla Dallerup and Ian Waite, and it was good to see the three of them entering so freely into the spirit of this dance-themed cruise, happy to talk with passengers and pose for photographs as well as entertain on stage. Craig’s flight might have been a nightmare in terms of baggage reclaim, but by the evening we saw him as we know him best, resplendent in dinner jacket, two-tone shoes and trousers of a proper length.

Elsewhere around Arcadia there were exhibitions of dresses worn by the show’s professionals and celebrities (costing around £3,000 each, incidentally) and there was plenty of activities for those who love dancing. Quizzes, talks, sequence dancing and dancing lessons dominated the daily timetables and in the evening there were even films linked to dance, like Singin’ In the Rain with a filmed introduction from judge Len Goodman. 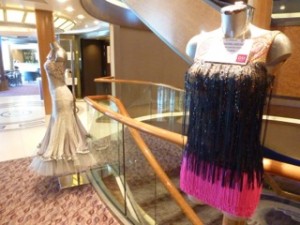 But what was the cruise like for those who don’t count the days until the start of the next series of Strictly? I include myself in this group and, after 17 days of being cosseted on Arcadia, can report that the same magical mix of experiences which first attracted me to cruise holidays ran successfully alongside the waltzes and the sambas. Mind you, I will confess that I enjoyed watching Camilla and Ian dance. Quite apart from their rhythm and grace, their sheer physical strength and fitness impressed me each time I saw them. If pushed, Craig would probably have awarded begrudging eights, but I can tell you that everyone else would have showered them with tens.

I have been on Arcadia (carrying around 2,000 passengers) three times and it is the ship’s spaciousness that appeals to me. There was never a day when finding a sunlounger was a problem and in the evening there were plenty of quiet corners for those who wanted to read or perhaps play cards. The daily programme of activities was as varied as ever. Kenneth Vard’s talks about ships were fascinating, particularly his talk about some of the less well-known aspects of the loss of Titanic. His comprehensive research and evident enthusiasm made him a popular speaker and the numbers attending grew larger as word spread.

The Headliners’ production company was amongst the best I have seen, full of energy and vitality. Another Opening, Another Show, their first of many performances, included a selection from Les Miserables and the ‘Master of the House’ sequence was brilliant. New to me was speciality act, Duo Bolshakov. The couple has worked around the world in circuses and theatres and here, afloat in the Mediterranean, they dazzled with their daring aerial straps.

The highlight for me, however, was the two performances given by The Beatles Experience. They were billed as one of the UK’s top tribute bands and that is almost to understate their talents. Not only did the four look like the Beatles, they sounded like them too as they quipped and chatted between songs. For each set, the Palladium came alive and I felt as if I was back home on Merseyside at the height of the swinging sixties. 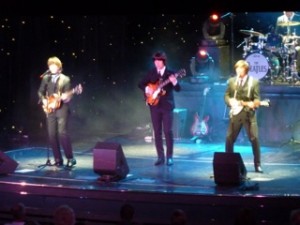 Passengers joined in, clapping and cheering, as classics from ‘I Wanna Hold Your Hand’ to ‘When I’m 64’ were belted out. I spoke to the lads after their second show and Darren Bartlam (Lennon) confirmed that they had loved performing just as much as we’d enjoyed listening. Two great shows, then, and if they feature in a future cruise programme, excuse yourself early from dinner and bag a seat in the stalls!

The daytime temperatures in the Med were consistently in the mid 30s and we saw ports at their best. Venice, as ever, was stunning but so were Dubrovnik and Valetta. I’d not been to Malta for years and was surprised to see how Valetta had developed, combining its history with a contemporary sophistication. 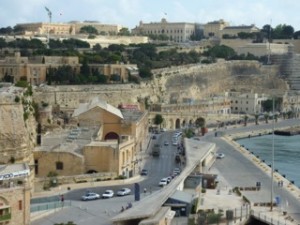 I have never been to Cartagena in Spain and I was impressed. The Roman theatre is worth visiting and a stroll along the front is rewarded with some fine views and imposing pieces of modern street sculptures. Explore the back streets, however, and another world is glimpsed. Houses pack together and each street has its own tiny cafes and meeting places. We settled in El Barril, a quiet bar situated in the shade, ideal for me to try my first Liqueur 43, the local tipple. It’s sweet but packs a punch and sipped with a latte (both bought for the princely sum of €2) it set me up for the next activity, a tour of the shops and stores in the main street. 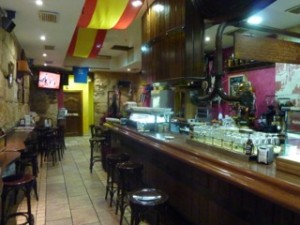 Back on board, we decided one night to splash out £10 in The Orchid, a restaurant on the sun deck which specializes in Asian fusion dishes. All the windows overlook the sea and the setting sun that night was stunning. I chose the loin of lamb, pink as requested, with a tamarind and citrus glaze served with jasmine rice and wilted greens. It was delicious and my friends enjoyed their choices just as much. For afters I opted for the medjool date spring roll with ice cream – wonderful. 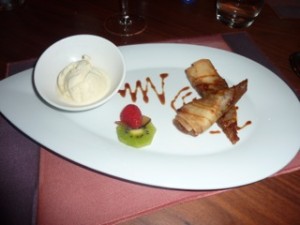 Our charming waitresses Grethel and Analy didn’t rush us, and our wine waiter Garnesh did an excellent job using his expert knowledge to guide me towards the excellent Billy Billy shiraz at £18.

On other evenings, the Lower Meridian restaurant provided excellent service, thanks to the hard work of our waiters Alwyn, Bicram and Joachim. They delivered some truly tasty meals, my favourite being a starter of Bury black pudding with duck egg and bacon crumbs, served on a triangle of fried bread. It may have been dripping in cholesterol but, by golly, it was good! The roast beef was a popular main course on our table but I tended to ignore the conventional in favour of the Indian dishes that often featured. For obvious reasons, these too were superb. The executive chef, Andy Yuill, inspired his galley teams to deliver their best and they did precisely that: I returned home half a stone heavier, despite the good advice given by trainers Denise Coghill and Jonathan Ellis when I visited the gym each morning.

If Arcadia is spacious in terms of her public areas, it is also spacious in terms of cabins. I was on G deck, in a large outside cabin with both a bath and shower, very handy for getting on and off the ship and close to Reception to collect the daily newspaper or chat with the cheerful team on duty there 24 hours a day. Arlene, Sanjiv, Pascoal and David must deal with a huge array of issues yet they were always smiling, clearly eager to be of assistance whenever I visited them. 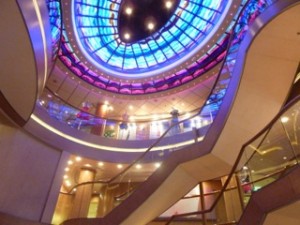 The 17 days passed all too quickly and by the end, when new friendships had been forged and new places explored, I had but a single thought. Would it be too soon to plan a return? But surely it can never be too soon to experience the comforts of cruising again and I have no doubt that I will be logging on to Silversurfers shortly. And who knows, if the Strictly team is on board I may even be tempted to join them for an Argentine tango. But I doubt it – that medjool date spring roll will inevitably take precedence. 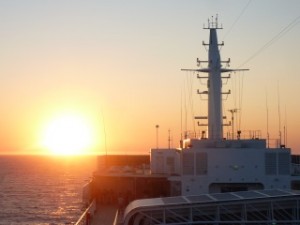 David George retired six years ago. He worked in education as well as in broadcasting as a producer with BBC Radio. He now blogs about his cruise experiences and writes UK and European city guides.