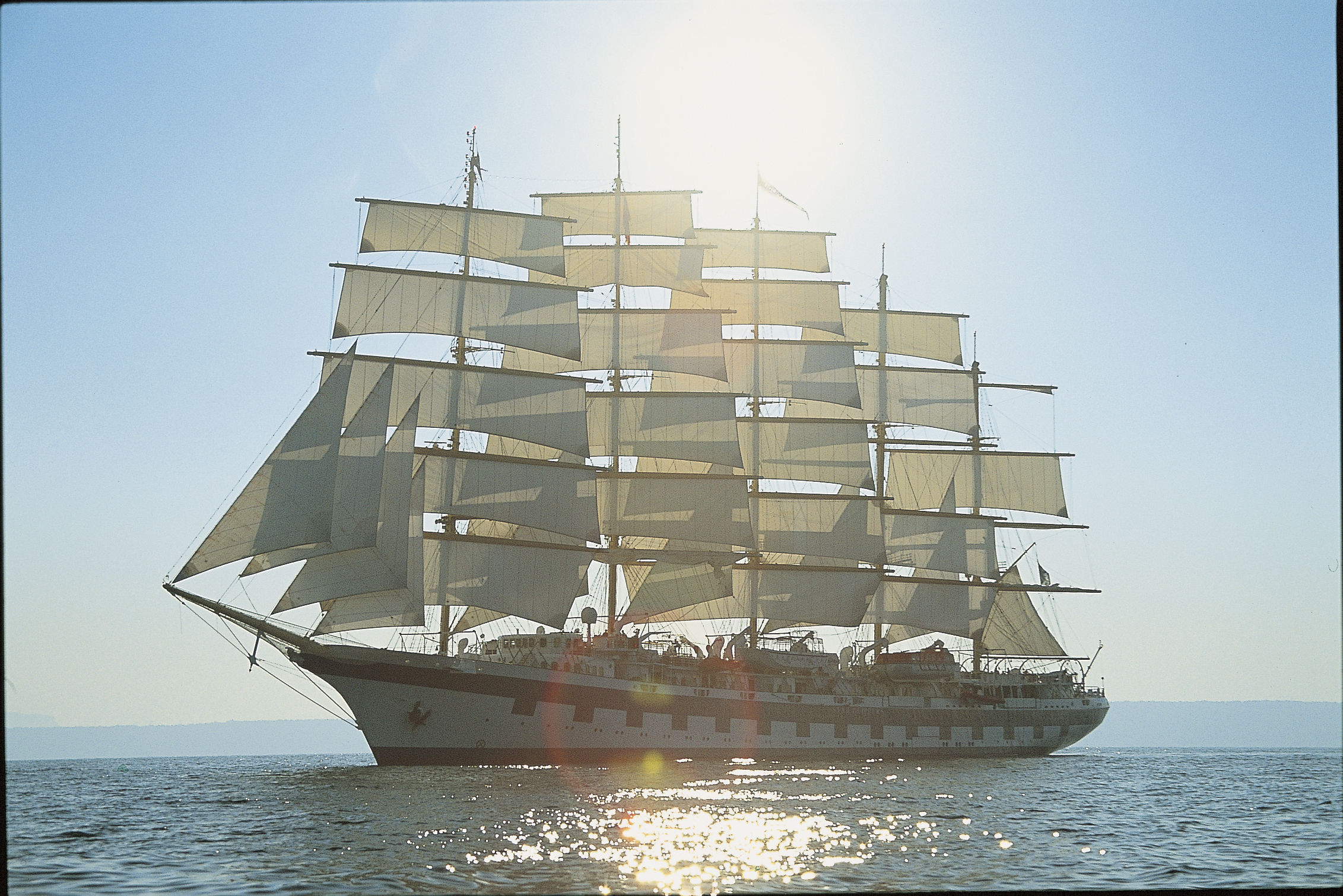 Italy’s southern coastline is one of the most beautiful in the world. Explore by full-rigged sailing ship and it’s even better, says Stephanie Maskery.

“They usually appear in groups”, whispered our guide as we peered into the depths of the dark Mediterranean Sea. Out on the horizon, lightning struck the coast of some nearby jagged islands and the rising sun turned the huge storm clouds a startling orange. The ship’s deck was quiet save for five passengers who’d risen early with the promise of spotting something special.

“Look, down there near the bow!” someone cried. Leaning out as far as seemed safe, I glimpsed a sleek shape breaking free of the water. Tiny yet graceful, the dolphin played alongside the ship, disappearing for a time only to reappear, much to the delight of everyone on deck.

This was my first morning aboard the Royal Clipper, the world’s largest full-rigged sailing ship. It offers a small group of people a trip of a lifetime travelling down the Amalfi coast. So far it was certainly meeting my expectations.

Dolphin-spotting is a daily 7am activity led by the ship’s on board marine biologist, Lara. More intrepid travellers can even go for an exploratory snorkel.

Unfortunately, high winds meant this was off the cards, but with three pools, a spa and gym, this relatively small ship has plenty to entertain its passengers.

The Royal Clipper is the flagship of the Star Clippers’ fleet. With five huge masts and 42 sails it looks like something from Hornblower, and certainly has the wow factor.

The company, owned by Swedish entrepreneur and avid sailor Mikael Krafft, offers guests a more boutique alternative to sprawling cruise ships. A capacity for just 227 passengers makes for a wonderfully intimate experience, perfect for those seeking the adventure and luxury of a cruise – without the crush of more modern ‘floating hotels’.

British designer Donald Starkey has worked on some of the world’s most impressive mega-yachts, and his Edwardian styling gives the Royal Clipper a subtle splendour. Best of all is the ship’s breathtaking triple deck atrium, which lets light into the dining room through a glass-bottomed pool on deck.

One of the best parts about being on board the Royal Clipper is sailing itself. The ship dips and sways in the water as waves crash against portholes below deck. Standing near the bow with sails and ropes snapping in the wind feels like a true adventure.

While winds and lively seas make for fun sailing, they can play havoc with the itinerary, as we found out when our first two stops, Ponza and Sorrento, were called off.

This was smoothly remedied by the crew, though, and the ship’s Swiss cruise director, Pierra, quickly drafted a new itinerary to Naples. Eager to explore such an historical area, I signed up for an excursion to nearby Pompeii.

As our coach made its way out of the suburbs, the mighty Mount Vesuvius, with its dusty red slopes and classic conical shape, rose into view. On the speakers overhead our guide, Ida, told the story of the ill-fated Pompeians who failed to spot warning signs that preceded a huge eruption in 79AD that killed thousands.

The entrance to Pompeii is crammed with stalls selling ‘unique’ jewellery made from the fires of the mountain. Whilst some might not be genuine, a few gems can be found amongst the tat.

Once inside the now ruined town, it’s easy to understand why the Pompeians were reluctant to leave. The rich volcanic soil offers food in abundance, and the city is surrounded by mountains and lush vegetation.

The perfectly preserved victims of Pompeii are well-known figures, but seeing them first hand is humbling. Her last moments of prayer, captured forever in stone, bring life to the empty streets of this frozen city.

With a few hours to kill before the ship’s departure, I decided to explore our unscheduled stop, Naples. Once a Roman holiday resort, it’s now Italy’s third largest city.

The Castel dell’Ovo, a brute of blackened stone perched on top of the harbour, took my breath away. Also known as the “castle of the egg”, the name is said to come from when the poet Virgil planted an egg under its foundations. Were it to be broken, it would herald the end of Naples.

A quick ride on the city’s funicular took us to the Castel Sant’Elmo, a star-shaped fort that sits at the top of the city.

Naples’s scale can only truly be appreciated from the castle’s palisades. This vast city of piazzas and church towers spills down into the bay, where the rocky silhouettes of the islands Capri and Ischia can be seen in the distance. Far down below in the harbour, the Royal Clipper’s sails shimmered in the fading sunlight. With a rumbling tummy I started the descent for dinner.

The Clipper’s galley prepares 2000 meals a day, not that you would know it – each dish is beautifully presented and seriously tasty. The ship’s Jamaican head chef, Devan, requests a nationality breakdown of all the guests to ensure there is something to suit all tastes – from grilled sea bass to chateaubriand in truffle sauce

After having my fill of swordfish, followed by amaretto cream profiteroles, I grabbed a mojito from the tropical bar before heading on deck for our sail-away.

For most ships a single horn blast signals departure, but on the Royal Clipper it is a much more regal affair.

The sails are lowered by some of the ship’s 25 riggers, and as it slips out of the harbour, the sound of 1492 Conquest of Paradise by Vangelis is played through the speakers.

Masts twinkling in the moonlight, it’s an overwhelming experience.