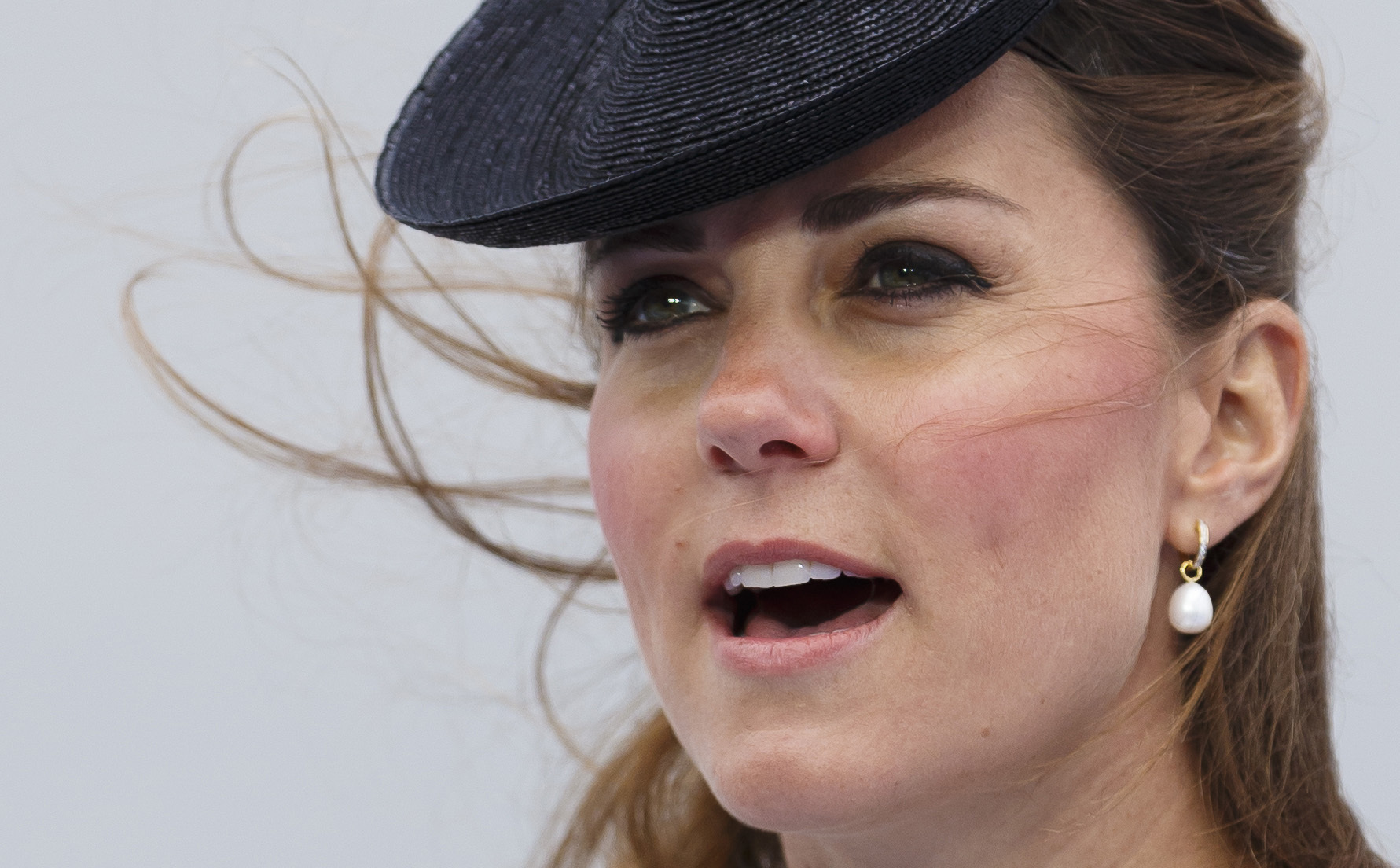 Kate is godmother to new liner

The Duchess of Cambridge carried out her last solo engagement before her baby is born – launching a new liner.

Kate, who is around eight months pregnant, looked relaxed as she stepped from her chauffeur-driven vehicle to the quayside in Southampton.

She is due to give birth by mid-July and made the journey from London by helicopter for the naming ceremony of Princess Cruises’ 3,600-passenger vessel Royal Princess.

A musical extravaganza was staged ahead of the christening of the new vessel by the Duchess and blue carpet, not the customary red, was laid out for her arrival.

Guests were associated with charities that have the Duke and Duchess of Cambridge or Prince Harry as their patrons with spectators from East Anglia’s Children’s Hospice, Kate’s charity, SkillForce which has William as its figurehead, and Harry’s organisation WellChild.

Kate, who wore a black and white print Hobbs coat, is the new liner’s godmother, a symbolic position similar to a patron or sponsor that dates back to the mid-19th century when leading women were selected for the honour.

Princess Cruises has a history of illustrious godmothers for past ships including Diana, Princess of Wales, who named the first Princess Royal in 1984, actress Audrey Hepburn, Sophia Loren, and Baroness Thatcher.

The Band of Her Majesty’s Royal Marines Portsmouth accompanied by the Pipers of the 1st Battalion Irish Guards gave the start of the ceremonies a military flavour, lining Kate’s route to her seat after playing rousing tunes such as Pomp And Circumstance, sea shanties and a march called HMS Queen Elizabeth.

The 141,000-ton Royal Princess will sail the Mediterranean throughout the summer until it begins a series of eastern Caribbean cruises in the autumn.

Features of the new ship include a top deck, glass-bottomed walkway extending 28ft (8.5m) beyond the edge of the ship, the largest pastry shop at sea, balconies on all outside staterooms, 19 decks and a speed of 22 knots.

Spectators were treated to a performance by singer Kerry Ellis, a well-known face on the stages of London’s West End, who was backed by the Mass Ensemble.

Alan Buckelew, president and chief executive officer of Princess Cruises, gave a speech praising the Duchess for taking part in the naming ceremony, saying: “To welcome Royal Princess into our fleet, we’re incredibly honoured that HRH the Duchess of Cambridge will officially name the ship today, marking the start of its many journeys through the world’s oceans and to fascinating shores.

“Perhaps the most important element of the naming tradition is the godmother selected to christen a ship. A godmother is the figurative patron of the ship through its entire life, and symbolises the spirit of the vessel.

“We can think of no more fitting godmother for our magnificent new ship. Her Royal Highness is an inspiring ambassador for Britain, and she is admired around the world for her style and grace, and for her compassion for others.”

The Right Rev Tim Dakin, Bishop of Winchester, blessed the ship, delivering a prayer, and Captain Tony Draper invited Kate up to perform the naming ceremony on a nearby platform.

A few feet away, suspended from the ship’s hull by a rope, was a huge bottle of champagne by Moet and Chandon, holding 15 litres and known as a Nebuchadnezzar.

Two youngsters, Isobel Rowbotham, 14, and her eight-year-old brother Charles, handed the Duchess a pair of scissors to cut a length of rope to launch the bottle into the hull.

The youngsters’ brother died from a brain tumour while a toddler but they were supported by Kate’s charity East Anglia’s Children’s Hospice.

Before cutting the rope, Kate chatted to the pair, then carried out the ceremony, telling the guests: “I name this ship Royal Princess, may God bless her and all who sail in her.”

The bottle was released and flew into the hull, smashing to a large cheer.