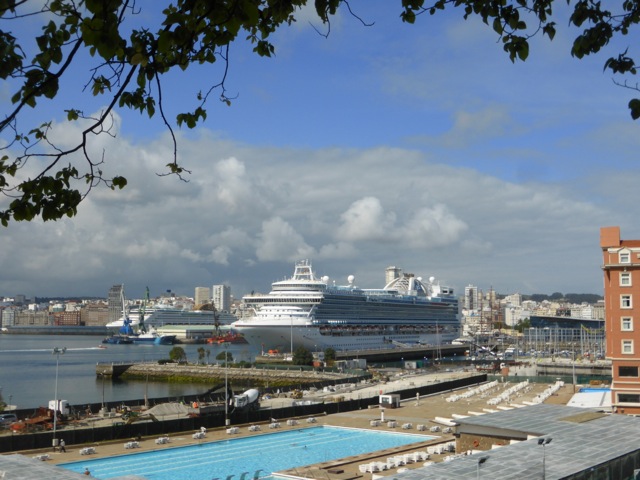 David George, an independent cruise blogger, reports on his first experience of a holiday with Princess Cruises . . .

If you’ve read any of my other reviews you’ll know that I’m a self-confessed cruise addict, never happier than when I spot my luggage waiting for me in my cabin, another holiday about to start. Back from my first world cruise only a matter of weeks ago, I’ve been suffering such dreadful withdrawal symptoms that I knew the only possible cure would be to return to sea. I’ve sailed with many cruise lines over the years but never with Princess Cruises and when I saw that Emerald Princess was sailing to Bilbao and Bordeaux, two ports I have never visited, I decided I must give them a try.

Emerald Princess is seven years old and carries around 3000 passengers, the largest ship that I’ve been on, but initial worries about her size vanished as soon as I boarded. On hand were members of the ship’s company, keen to help a new boy like me to feel at home. In fact, the kindness of senior officers and junior crew – combined with their obvious pride in Emerald Princess – will be my abiding memory of the cruise. Nothing seemed too much trouble. In Horizon Court, the self-service restaurant on Lido deck, it was not unusual for waiters and waitresses to serve my friends and I cups of tea and coffee at our table, a nice touch and one that we appreciated. Such personal attention made it possible for me to concentrate on more important things like helping myself each afternoon to the warm freshly baked scones and cream, often with a sous chef standing by them urging me not to stint on the cream.

Quality food and service is, of course, essential to a successful cruise. Executive Chef Giuseppi Pollara inspired the preparation of more than 20,000 meals a day and our choice of venue to test his skills was the Michelangelo Dining Room, an Anytime outlet which gave us a free choice of when to dine. We didn’t queue and during the seven-day cruise enjoyed dinners that proved beyond doubt that Giuseppe had certainly passed the test with flying colours! I particularly enjoyed an appetizer of tian of crab, scallop and shrimp and the main course of roasted pheasant with thyme jus, caramelized shallots and basted potatoes was superb. I tried but failed to decline a pudding and in the end enjoyed them all, including the New York cheesecake (with extra ice cream) followed by coffee served with petit fours. We shared our table with a couple of Canadians and by the end of the week, friendships had been formed and contact details exchanged. Service was swift and discreet, led by Martins, our Portuguese head waiter. The waiter Nelson assisted by his junior, Oleksii, couldn’t have been more professional, offering expert advice as well as insights into their own lives and national cultures. I might add that the Merlot was good value at $24 a bottle, complementing both starter and main courses.

In addition to Michelangelo, there is Club Dining in two other restaurants as well as self-service in Horizon Court, and for that extra-special occasion there are evenings for culinary connoisseurs, held exclusively at the chef’s table.

But what about the itinerary? The Spanish port of Bilbao lived up to expectations with its mixture of Basque history and ultramodern city architecture. Blue skies and temperatures in the mid-20s were ideal for exploring, whether on an optional tour or independently. The free shuttle bus dropped us within easy walk of the world-famous Guggenheim Museum, the flamboyant creation of architect Frank O. Gehry. 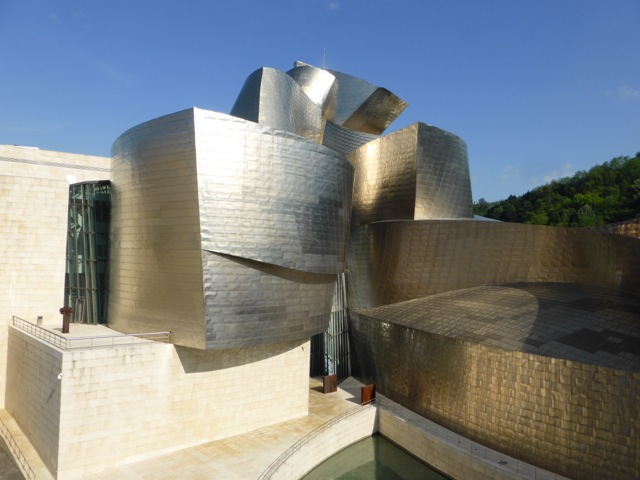 The building’s mixture of titanium, glass and stone may not be to everyone’s taste but I loved it. Urban regeneration on this scale deserves respect and it was good to hear other passengers share my enthusiasm. Crowds soon gathered and I was glad we had reached the museum before 10.30. If you go to Bilbao, my tip would be to book an organized tour to avoid the queues or book online before leaving home. Next to the Guggenheim is the incongruous sight of a 40-foot high floral Aberdeen terrier, whilst along the street the Church of San Jose offered a peaceful and interesting retreat from city traffic. 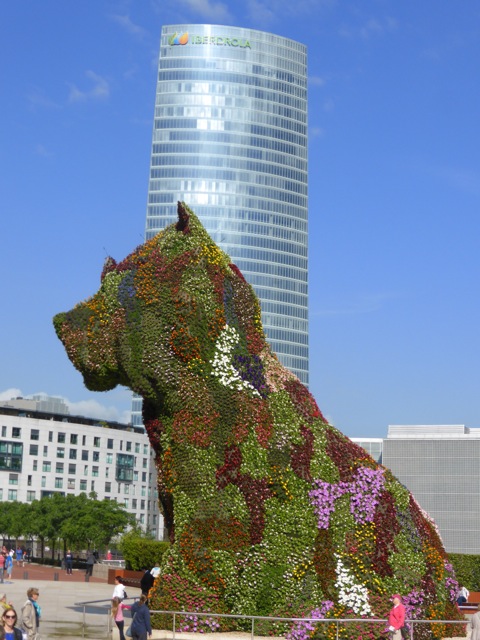 Back on board there was always plenty to do, so much so that simple pleasures like sunbathing, swimming and reading had to be fitted into a busy timetable. Thank goodness, then, for ‘Princess Patter’, the daily paper which lists each day’s activities! Daily port talks provided useful background knowledge and in the Piazza there was always something of interest. These included demonstrations of creative fruit and vegetable sculptures as well as music concerts and speciality acts. 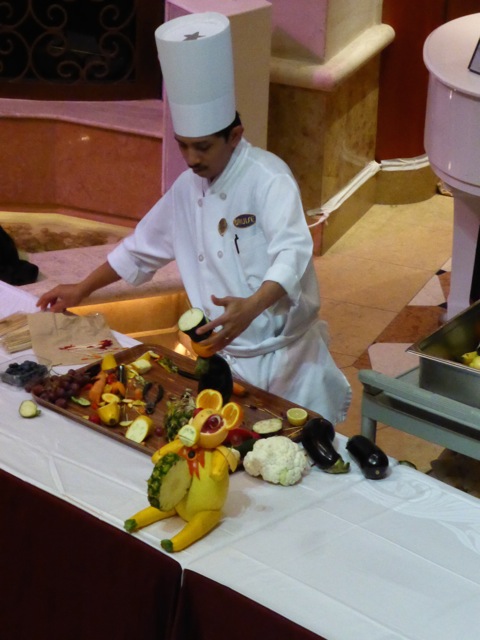 Each evening the area hosted street-style entertainers such as jugglers and in the Princess Theatre, a very grand space on two levels, we enjoyed a comedian as well as solo singers and song-and-dance shows. Best of all for me though was Steve Larkins who brilliantly performed the classic hits of Freddie Mercury and Queen.

Elsewhere there is a fully-equipped gym for the active, the Lotus Spa for total relaxation, quizzes, dozens of children’s games, dance venues for everything from ballroom to Motown, some great films like ‘Captain Philips’ shown as one of the Movies under the Stars on Deck 15, self-help bridge, a huge casino, art auctions . . . and even a ukulele class for budding George Formbys. 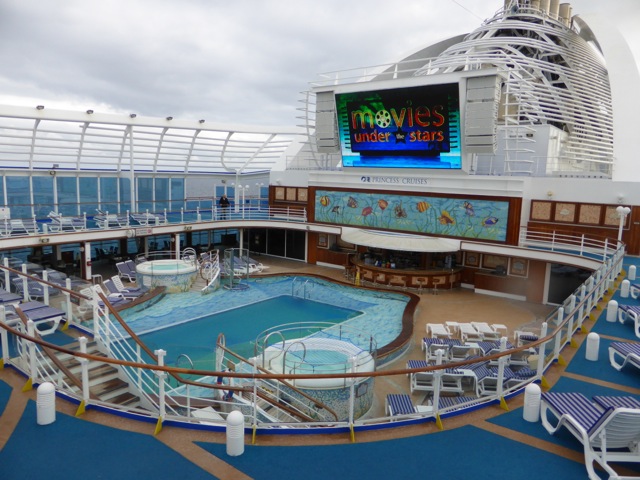 The Captain’s Circle, Princess Cruises’ loyalty programme, is one of the best I have known and membership is automatic after completion of just one cruise. Each tier rewards passengers with more and more bonuses, not only free gifts in the cabin but also some free wifi minutes, extra onboard credit and even free laundry for the most loyal. Patrizia Pometcu is the Circle’s hostess and she is enthusiastic about the scheme. After one of the drinks’ parties, I caught up with her. “Passenger expectations are important,” she told me, “and my challenge is to make sure our programme delivers an even better cruise for those who keep returning to us. It’s all about attention to detail and I love it when passengers tell me that they feel genuinely recognized for their loyalty.”

By the time we reached Bordeaux I was feeling very much at home on Emerald Princess. I had also discovered the perfect start to my day. At the International Café in the Piazza, I enjoyed a cappuccino for less than $3 and discovered that you could have a continental breakfast as well at no extra charge. My favourite was the freshly made and piping hot egg-and-bacon muffin but there were croissants and pastries available too. In fact I enjoyed the café so much that I often returned at lunchtime for a panini and cold drink, an ideal spot to enjoy a music concert in armchair comfort. 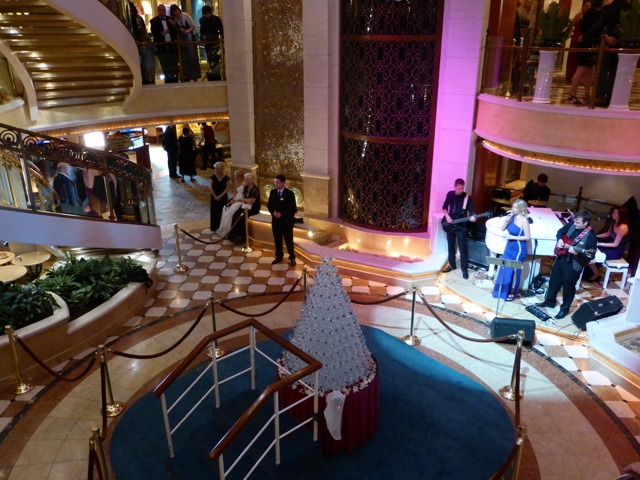 We berthed at Le Verdon when we visited Bordeaux and my friends and I decided to take an optional excursion to make the most of our time there. 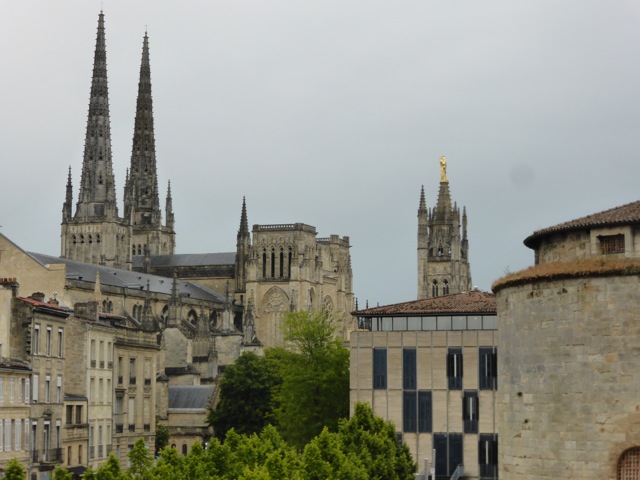 Bordeaux – the skyline and Cathedral

We travelled through vineyards and past many handsome Medoc chateaux to reach the World Heritage city and it was well worth the journey to see just a few of the 362 historical monuments. The classical elegance of the Grand Theatre is stunning and it came as no surprise to see queues forming for opera tickets, but the Cathedral, built between the 12th and 16th centuries in Medieval Gothic style, demands attention too. In complete contrast is the former wine warehouse where the huge wooden vats are now used as courtrooms. How about that for the creative use of space? 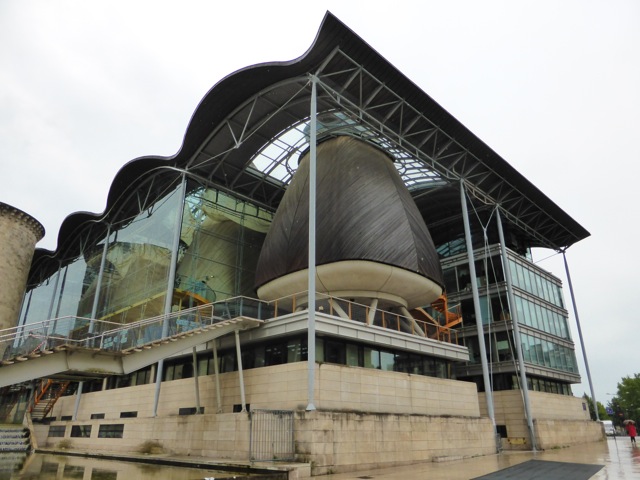 All too quickly the cruise was coming to an end. Captain Nick Nash, a Cornishman, was happy to chat at various functions, an example shared by everyone I met. Anoop, a bar steward from Kerala, was one of the many people I will remember. He served drinks at one of the parties and did so with immense cheerfulness, finding time to take interest in our day, and from then onwards remembered me by name and even my preferred drink. With 3000 passengers, that is a remarkable feat! Then there was Saul, a Mexican and my stateroom steward, who kept my spacious E-deck cabin clean and tidy yet found time to answer questions about shipboard life.

The man responsible for these high standards of service is Andreas Pitsch, the Hotel General Manager. He oversees a thousand members of staff and in conversation with him I could see why he commanded such respect and loyalty. He is full of energy, a total professional and very evidently at the top of his game. “I see myself as the head of a large family,” he enthused. “For me, working on a ship isn’t a job, it’s a lifestyle – and my priority is to make every single person in the Hotel department feel part of the family of Emerald Princess.” With a career background in the hotel industry he is well qualified to know how to deliver a good experience for passengers. In 1995 he went to sea as a junior waiter but within five years had been promoted to Director of Food and Beverage before finally securing the top job. 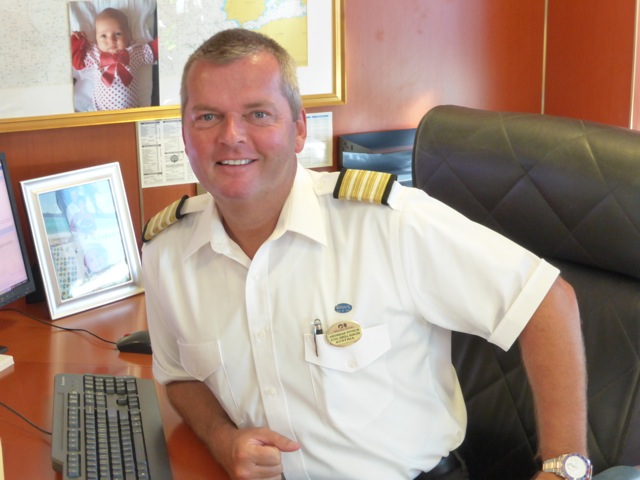 Thanks to Andreas, I felt special from the moment I embarked and it didn’t take long to discover many others who felt the same. Sasha Sargent from Berkshire was on her first cruise with her mother: “This has been such an incredible experience!” she said. “I’ve always mocked cruise holidays but the facilities, the food and the service on this ship have been amazing – I’ll be back and next time I’m bringing my family with me!”

Sasha sums it up perfectly. I’ll be returning for more as well – if a right royal welcome appeals to you, then Emerald Princess definitely awaits your pleasure.

David George retired seven years ago. He worked in education as well as in broadcasting as a producer with BBC Radio. He now blogs about his cruise experiences and writes UK and European city guides.